Opinion: The A380 dream crash-lands

The end of the Airbus A380 is not the end of European aircraft manufacturing. It is the result of mistakes that were made many years ago. Now Airbus has to learn the right lessons, says DW's Henrik Böhme. 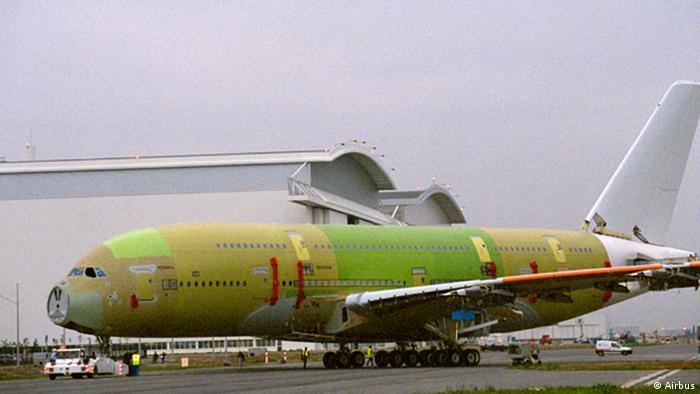 A week ago, Australia's Qantas canceled their order for eight Airbus A380 superjumbos. But the real nail in the coffin came from the Persian Gulf when Emirates airline, the largest A380 customer, told the manufacture that it would reduce its order from 162 to 123 aircraft. They would only buy 14 more and that was it.

In the end it was a commercial decision to stop building the prestige plane; in another three years it will all be history.

Naturally it won't all be over tomorrow or even in three years. The giant flying bird won't suddenly disappear from the sky. In fact it will attract the attention of passengers at airports for many years to come just like the famed Boeing 747 jumbo jet still does.

Yet fascination is one thing, economics another.

Too big, too expensive

The Airbus project was controversial from the start. Heads have rolled over the years, and the European project almost fell apart because of such simple things like cables that were too short. But in the 1990s many believed in the giant plane, because it was becoming clear that more and more people would be flying.

Sure, the number of passengers is steadily increasing, but people are not constantly flying back and forth between the big hubs like New York and Singapore. And making an airport fit for the A380 was a costly affair for operators. In the end only a few airports now have the capacity to even handle the giant plane.

For airlines though other cost factors played a role. First there is the purchase price of around €381 million ($430 million). Despite the fact that airlines were usually able to get a discount on the sticker price, the A380 was never a bargain.

Then there are the expensive maintenance and running costs. The four engines eat up a ton of kerosene, a fuel that has gone up in price. In reality, it only really paid off when the plane was filled to capacity with paying passengers. Airbus did have the idea to make a new more economical model of the plane with only two engines, but that would have devoured another €10 billion in development costs. The idea was dropped.

Surely everyone saw problems coming down the road. Yet in this case you have to give it to Airbus' big competitor Boeing. They were smarter and learned to listen better to their customers. They decided against a continuation of their jumbo jet program and instead focused production on a number of smaller, more economical aircraft with great comfort for long-haul passengers.

Thus the Dreamliner, Boeing's 787, became a bestseller. Airbus has since followed in their footsteps and is trying to hold their own with the Airbus A350. So far there is a great demand for this plane. Just like for their medium-range model A320. These jets are now the bread-and-butter business of the European group.

Reaction from workers to the A380's demise has been muted. They have enough work since they already went through big cuts a year ago when Airbus slashed around 4,000 jobs due to the sharp decline in A380 sales.

The good news is that things will continue for Airbus, and a lot has been learned from the A380 project. Most importantly the weaknesses of a project with such a complicated supply chain with different production locations and complex logistics have come into the spotlight. As has the fact that you have to react early to customers' wishes.

Ironically, since the end of the A380 has already been hinted at for some time, the share price has had time to adjust. Since the beginning of the year, the stock has increased by 30 percent. Sometimes flights of fancy and crash landings are closer to each other than we think.