Will the coronavirus pandemic result in a pilot shortage? | Business | Economy and finance news from a German perspective | DW | 01.07.2020

Will the coronavirus pandemic result in a pilot shortage?

During the pandemic and the resulting crisis in aviation, most pilots have been grounded. But as the business picks up again, certified cockpit staff might be scarce, as Andreas Spaeth reports. 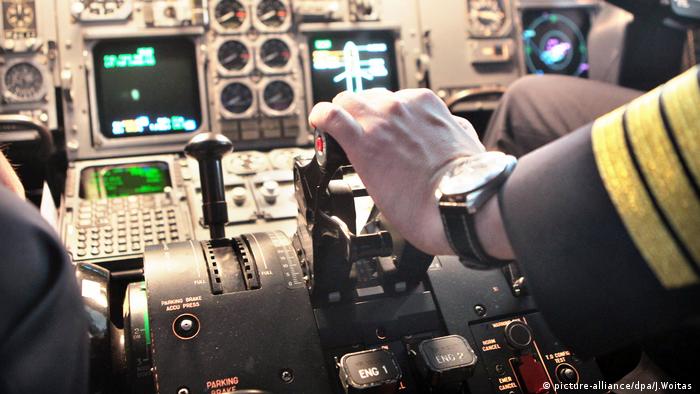 Nils Wulkop has just received his new shift plan. Looking at it, he sees he won't be flying at all in the days ahead. The 51-year-old is a Lufthansa pilot from Hamburg and has been in the cockpit for 25 years. He's flown Airbus A320s for a decade now.

Wulkop hasn't operated the sidestick or replaced the control column since March. "I'd never have expected the grounding would be so long," says the captain. He misses his job: "I have enjoyed flying, for me it has been a kind of relaxation." For the last three months he hasn't left northern Germany.

"All my colleagues are happy once they see on their roster that they are allowed to fly," he says. "But," he acknowledges, "it's tough for Lufthansa at the moment to do any reliable planning." More often than not, scheduled flights can't take place, as the destination country hasn't opened up its borders yet. During June, only a fraction of the 280 aircraft with the crane logo on the tail — usually operated by Lufthansa's passenger airline — actually left the ground.

The whole group, including subsidiaries, had a fleet of about 760 aircraft, of which about 200 will remain permanently grounded. Almost every seventh pilot job will be in jeopardy during the inevitable staff cuts, Lufthansa HR Director Michael Niggemann had hinted.

Still, at the German pilots' association Vereinigung Cockpit (VC) nobody expects Lufthansa to lay off pilots. "Some positions might be cut, but we believe all staff will be needed, for example to help during any necessary retraining in the future. I don't assume heads will disappear at Lufthansa," says VC spokesman Janis Schmitt. He himself has already been hit hard, working earlier at former Air Berlin regional airline subsidiary Luftfahrtgesellschaft Walter (LGW), which most recently flew for Eurowings and then went into insolvency.

Outside of Lufthansa, recently propped up by up to €9 billion ($10.2 billion) in German state aid, the climate is much tougher. "We estimate that there are up to 22,000 commercial and professional pilots in Germany overall, of which currently more than 1,200 are threatened by immediate unemployment," Schmitt says. He calculates that at LGW alone there were 160 pilots, at the Thomas Cook subsidiary TCN 100, at Sun Express, now going into insolvency, 300 to 400 and another 300 might be made redundant at TUIfly.

"There is a big question mark over Germanwings as well, with another couple of hundred people at risk, while Condor is also facing a difficult business climate," says Schmitt. 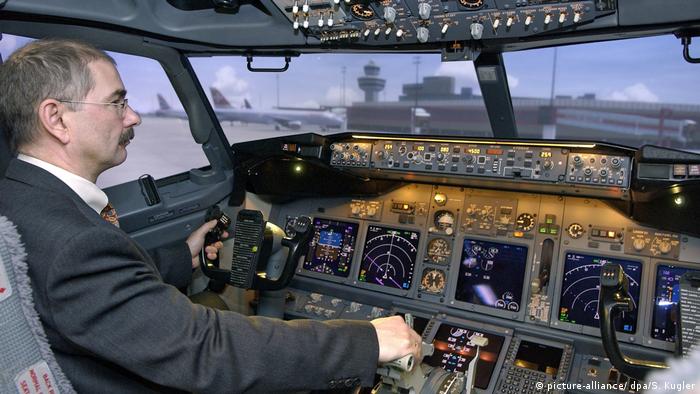 A trainer in Boeing 737 flight simulator in Berlin

The European Cockpit Association (ECA) warns that "thousands more pilots will soon join the ranks of Europe's unemployed." But both Nils Wulkop as well as his former LGW colleague remain upbeat. "I am an optimist, as Lufthansa was Europe's No. 1 before," he says. "I have still 14 years ahead of me," as commercial airline pilots need to retire when they turn 65, "I'm not really hit by that now in the middle of my career." Training a commercial pilot for about eight years is so expensive after all, that neither employers nor employees are considering layoffs or leaving the profession altogether.

What to do right now?

Schmitt evaluates the situation soberly. "Basically, everyone of us is in danger right now, but at the big airlines there is bulwark of contracts and safety cushions. In general I expect that in two or three years the old passenger levels will be reached again and people will be needed. Of course, the question is what to do in the meantime," he says. This is the question many grounded pilots are already asking themselves, and answering it may become a key factor for the industry.

"Unlike other professions, pilots need continuous flying experience to keep their license and remain employable. This is a legal and mandatory requirement," explains ECA.

At least every 90 days, pilots have to prove their proficiency in performing three take-offs and landings. That's almost impossible during a pandemic, not even in a simulator, which would be sufficient. But they are mostly closed down right now. Schmitt himself can't currently fly after losing his job, but is lucky for the moment, as his license only expires in March 2021. "After that I would have to extend it on my own. Either the Federal Employment Agency (BA) will help me or a new employer, otherwise I'd have to pay for it myself," he fears. "That can easily amount to €2,000 including travel to get your license extended." That's a lot of money for an unemployed pilot.

Hard to stay in shape

Most pilots are not occupied keeping their aviating skills proficient during the forced grounding, occasionally sifting through charts or manuals they hadn't had time to check on before. "I have started a new hobby, steering remotely controlled glider models with my sons," says Wulkop laughing, but he is certain:

"I would not currently be allowed to fly real aircraft and before that happens I have to relearn a lot of things." It's a given that most pilots' type rating, allowing them to fly a certain kind of aircraft, has expired. Once there is a major revival in scheduled flights, every pilot will have to go through three or four days of simulator training.

"This will become a big bottleneck when all pilots have to first renew their licenses and get freshly qualified, and that may drag on for some months or even a year," warns the pilots' spokesman. Many airlines and travelers might be faced with new restrictions at a time when things should finally be taking off again. The only thing Nils hopes for is to get back into the cockpit soon: "It feels weird to get a relatively high amount of money for doing nothing," he concludes.