Shareholders of Germany's flag-carrier have accepted the conditions of a multi-billion euro government bailout to keep the airline aloft. The deal gives the German government a 20% stake in the airline. 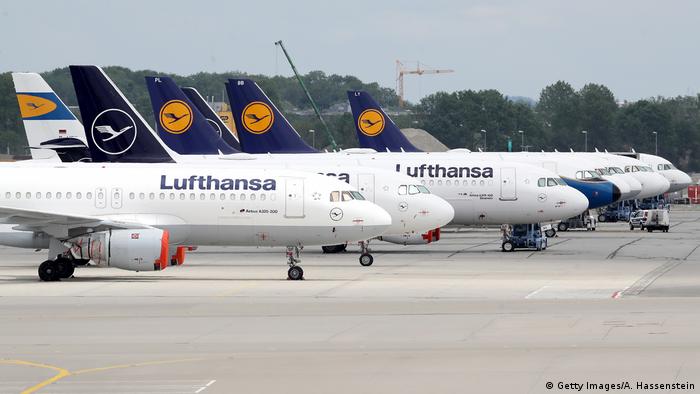 Lufthansa shareholders overwhelmingly approved a €9 billion ($10.1 billion) government bailout during a virtual meeting on Thursday, capping off weeks of tough negotiation over a rescue package for Germany's largest airline.

The deal was backed by 98% of the shareholder capital that cast a vote at the online meeting.

However, rival airline Ryanair intends to challenge the deal through European courts.

The Lufthansa Group, which includes Brussels, Austrian and Swiss Airlines, is currently shedding an estimated €1 million in cash reserves every hour, as the coronavirus pandemic has devastated global air travel.

During Thursday's meeting Lufthansa management made it clear how dire the situation was, warning that the company will face insolvency if the plans fell through.

"We have no more money," Chairman Karl-Ludwig Kley told attendees. "We are living from the reserves we set aside. Without support, bankruptcy looms in the next few days."

And this is "not a threat, rather a real danger," Michael Niggemann, Lufthansa's chief officer for corporate human resources and legal affairs, told participants.

What is in the rescue package?

As part of the deal, the German government will take a 20% stake in the airline with two seats on the supervisory board. The board's top shareholder, German billionaire Heinz Hermann Thiele, had previously opposed government ownership, but changed course on Wednesday saying he did not want to scuttle the deal.

Out of the €9 billion in taxpayer funds, €5.7 billion is a silent capital contribution from the state, along with a €300 million share package. The other €3 billion will be lent by state-owned development bank KfW.

The shareholders decision came hours after the European Union's competition authority said that the German government's injection of €6 billion was allowed. However, Lufthansa will have to give up a number of lucrative takeoff and landing slots at its Frankfurt and Munich hub airports. This had been a major bone of contention during the weeks of negotiation.

The EU also said that further measures to ensure fair competition would need to be followed.

Ryanair's executive board said it would challenge the EU's decision to back German state aid, claiming it heavily distorts competition on short haul routes in Europe.

Lufthansa "needs it as a war chest to fight off competition, it doesn’t need it to survive," Juliusz Komorek, Ryanair's chief legal officer, told reporters.

In May after the details of the bailout deal were agreed upon, Ryanair CEO Michael O'Leary, said Lufthansa was "addicted to state aid."

"How can airlines like Ryanair, easyJet and Laudamotion be expected to compete with Lufthansa now that it has €9 billion worth of subsidies?" O'Leary said in a statement.

The low-cost airline has already appealed to the European Court of Justice against state aid granted to airlines by France, Denmark and Sweden.

Under the terms of the proposal, the Dutch government would release close to €4 billion ($4.5 billion) in guaranteed and direct loans to KLM, as well as appoint a non-voting trustee to its board.