Bodies recovered in rescue of refugee boats in Mediterranean Sea

Authorities say they have recovered ten bodies during rescue operations in the Mediterranean Sea, off the Libyan coast. Smugglers took advantage of calm seas to send boats crowded with refugees across the water. 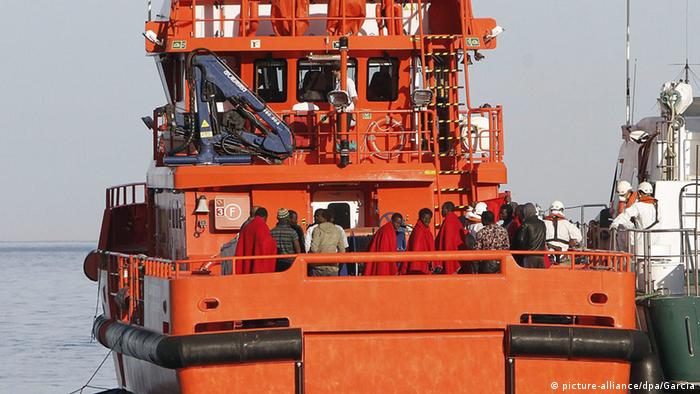 The Italian Coast Guard says the corpses of ten people were discovered off the coast of Libya on Sunday during rescue operations.

Officials came to the aid of at least 16 boats packed full of migrants, after people smugglers took advantage of calm seas to send several overcrowded vessels across the Mediterranean Sea.

A tug and a merchant ship also helped in the efforts.

The bodies were found in three separate operations, with Italian news agency Ansa reporting seven were found onboard two dinghies, while three people died when they jumped into the sea, and attempted to swim to a nearby trawler.

Italy said it coordinated the rescue of more than 2,150 migrants on Sunday after announcing 3,427 had been saved earlier in the weekend.

Boats carrying another 220 migrants were accompanied by naval vessels to the Italian island of Lampedusa.

The Italian coast guard reported on Sunday evening that more than 5,800 migrants had been rescued throughout the weekend.

Separately, the Greek Coast Guard said it had rescued another 530.

It comes a day after almost 3,700 migrants were rescued from smugglers' boats, most of whom are still in the process of being transferred to Italian ports.

It is one of the highest numbers of people ever rescued in a single day.

More than 1,200 people died last month attempting to make the treacherous sea crossing to Italy's shores, with most setting out from Libya.

The bulk of migrants making the trip come from countries with ongoing civil unrest, such as Syria, Somalia and Afghanistan.

The crisis has placed pressure on EU leaders, with some now seeking approval from the United Nations Security Council to launch military action targeting smugglers in Libya.

An emergency meeting saw members agree to triple funding for the Triton sea patrol mission, but indecision remains over what to do with refugees and asylum seekers.

In a newspaper interview, Austrian Chancellor Werner Faymann raised the idea of introducing a quota system for EU countries, so that numbers of refugees were distributed more evenly.

His comments echoed those of EU Commission President Jean-Claude Juncker last month, who said frontline countries such as Italy, and other nations like Germany and Sweden are taking in a disproportionately large number of migrants.

He called on member countries to "open the doors (to refugees) to make sure they don't come through the windows."

The idea is controversial, and faces heavy criticism from nations such as Britain and Hungary.

According to the International Organization for Migration, 1,750 people have already died this year, trying to make the journey.