European Union leaders have committed extra helicopters, ships and funding to stop migrants dying in the Mediterranean on the way to the continent. So far, more than 1,700 people have drowned this year. 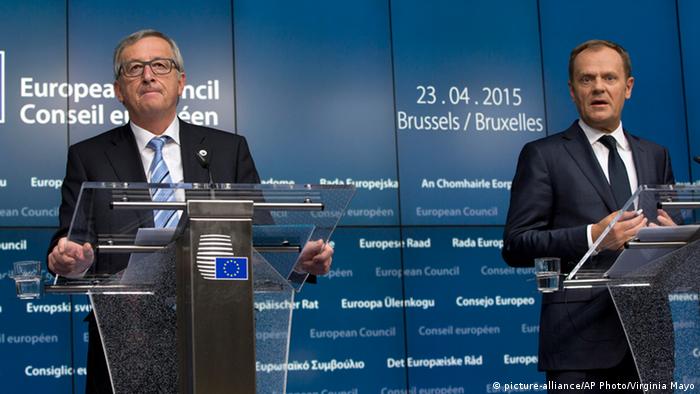 After more than five hours of talks on Thursday, EU leaders announced new measures they would take to stop migrant drownings in the Mediterranean, including tripling current funding for the Triton border protection mission.

"We want to move quickly. So we will triple the financial resources for the relevant missions of (EU border agency) Frontex, clearly improve them," German Chancellor Angela Merkel told a news conference after an emergency summit in Brussels which was sparked by the weekend sinking of a migrant ship off the Libyan coast in which an estimated 800 people died.

European Commission President Jean-Claude Juncker said he was pleased EU leaders had agreed with his proposal to triple funding for the bloc's Triton operation to 120 million euros ($130 million).

"We felt that doubling it (the budget) wasn't really that credible, so we wanted to bring it up to the same level as we had for Mare Nostrum," he said, referring to the Italian naval search and rescue operation - itself launched in response to mass migrant drownings off Lampedusa in 2013 - which was scrapped last year after funding to continue it could not be agreed among EU countries.

"The possible change of mandate means months and months of procedures and we have to act and to react immediately," European Council President Donald Tusk said.

The EU leaders have also asked their foreign affairs representative, Federica Mogherini, to propose actions to capture and destroy people smugglers' vessels before they can be used to send people on the perilous sea journey, often from Libya, across the Mediterranean.

Other measures announced by Tusk were similar to those announced in a draft 10-point plan on Monday, including stepping up cooperation to tackle people smuggling networks and working with countries where migrants come from and travel through, especially those around Libya, to limit people coming through and discourage them from putting their lives at risk.

Tusk also pledged that the EU would do more to protect refugees, including helping under-pressure states like Italy and Greece and coordinating resettlement on a voluntary basis.

He also pledged an "effective returns policy" for migrants who did not qualify for refugee or asylum status.

EU leaders sat down for crisis talks on Thursday on possible military action against human traffickers in Libya, in a desperate bid to halt the tidal wave of refugees trying to reach Europe by sea. (23.04.2015)

EU leaders are to hold an emergency summit aimed at revising their current Mediterranean rescue operations, which were cut back in 2014. This year alone, over 1,750 refugees have drowned trying to reach the EU. (23.04.2015)