The European Commission's president has called for refugee quotas for EU countries and more legal migration. Europe's leaders are discussing ways to stop thousands of migrants dying in attempts to reach the continent. 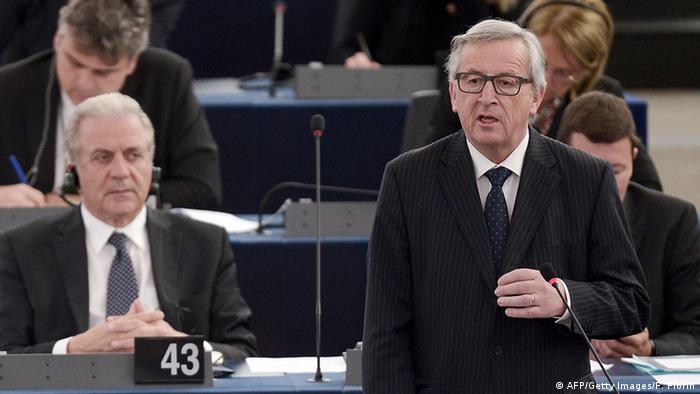 Speaking to lawmakers at the European Parliament in Strasbourg on Wednesday, European Commission President Jean-Claude Juncker suggested a binding quota for taking in refugees across all 28 EU member countries.

"I will appeal… for the establishment of a quota system," Juncker said, outlining plans he would later present to the rest of the European Commission. "We must distribute refugees throughout the whole of Europe."

Currently, only five EU countries, including Germany, take in 75 percent of the refugees in the bloc.

Wednesday's debate follows widespread concern in Europe about the deaths of thousands of migrants from Africa, Asia and the Middle East trying - via dangerous journeys often at the hands of human traffickers - to reach the bloc due to persecution, conflict or poverty. In response to mass-drownings off the coast of Libya, EU leaders last week announced a boost the Triton patrol mission in the Mediterranean.

"In the medium term, legal migration must be on the agenda," Juncker said, calling on member states to take in not just people needing protection, but also a limited number of people wanting to come to Europe and seek work.

"If we don't open the door, even partly, you can't act surprised when the unfortunate from across the planet break in through the window," he said.

He said while everyone knew that Europe could not be the only place of refuge in the fight against poverty, as the richest continent it must help so that people, driven by need, did not end up "sitting in boats and drowning before our coasts."

Juncker criticized the response of EU governments to the latest tragedies as "inadequate."

"It's not enough to just fight the symptoms of this crisis," he said, adding that "Member states must extend development aid, that's absolutely necessary."

The commission - the EU's executive arm - is due to unveil a comprehensive migration strategy in mid-May.