The German government wants to see the OSCE observers set free, and Russia has even pledged support to make this happen. But Berlin wants to avoid an attempt by Ukrainian forces to free the hostages by force. 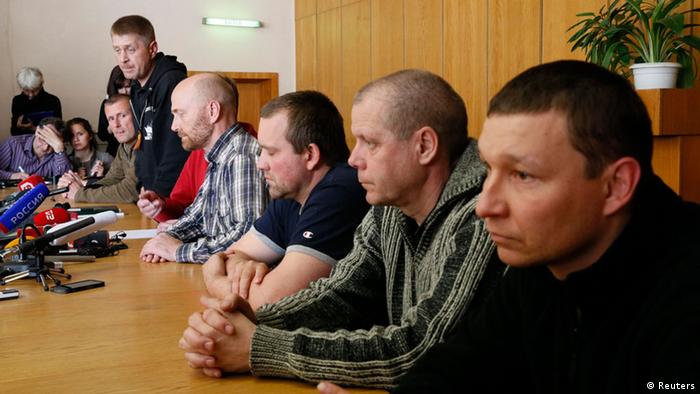 International observers from the OSCE, including four Germans, have been paraded in front of the public"in a disgusting way, coerced with weapons," in the rebel held city of Slavyansk, German government spokesman Steffen Seibert said in Berlin on Monday (29.04.2014).

Earlier, Foreign Minister Frank-Walter Steinmeier said the public display of the men in the media on Sunday was a "violation of every rule for treatment, and all the standards that are made precisely for tense situations like this." 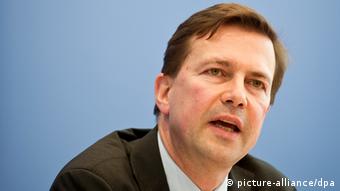 Seibert was unusually outspoken at the government press conference

The OSCE team consisted of three German soldiers, a German interpreter, a Dane, a Pole, a Swede, a Czech, and five Ukrainian soldiers. The Swedish officer was released on Sunday because he suffers from diabetes.

The German government sees this as a positive first step and is demanding the immediate and unconditional release of the remaining prisoners. However, it also wants to avoid any possible attempts by Ukrainian forces to free the hostages by force. Steinmeier raised these concerns with Ukrainian Prime Minister Arseniy Yatsenyuk in a telephone call on Saturday, Foreign Ministry spokesman Martin Schäfer confirmed.

Berlin is so far displeased with Russia's role in efforts to secure the release of the hostages. According to the Foreign Ministry, Moscow has pledged to help free the captives. But there's been a lack of clear signs from the Russian side, said Schäfer, both behind the scenes and in public, that "what has happened in Slavyansk with foreign OSCE observers is unacceptable." It prompted Steinmeier to telephone his Russian counterpart Sergei Lavrov again on Monday.

During the regular government press conference held in Berlin on Monday, nearly an hour was spent on the pro-Russian separatists kidnapping of soldiers with diplomatic passports.

At the press conference convened by the separatists in Slavyansk, the detained German colonel spoke for the observers, saying they were "guests" of the separatist leader Vyacheslav Ponomarev, and not prisoners of war. German government spokesman Seibert referred to them as "hostages."

It is clear that the prisoners "weren't in a situation where they could choose their words freely," as they were being paraded. There has been no direct contact to them since Friday afternoon. Seibert dismissed the accusation that the inspectors had been spying as "absurd." Their trip had been agreed by the terms of the "Vienna Document," which the OSCE member states signed in 1990 and which was renewed in 2011. 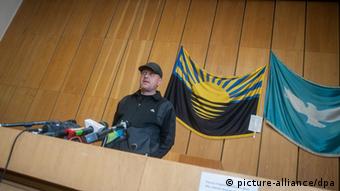 Ponomarev, the self-appointed mayor of Slavyansk, paraded the observers before the cameras

This document obligates the 57 member states to provide extensive information every year on its armed forces, its most important weapons systems, its defense planning, and its military budget. Major maneuvers planned for the year ahead also have to be reported every year. The information provided may also be checked by inspection teams. The aim is provide transparency - especially in crisis situations exactly like the current one in Ukraine.

Since the beginning of March, four such teams have already travelled to Ukraine - invited by the Kyiv government - and this one was under German leadership. A fifth mission led by Canada is already on the ground, though their further deployment is uncertain. All the OSCE states are informed of these inspection trips, and Russia - itself a signatory to the Vienna Document - has made use of it in the past. According to the German Defense Ministry, a Russian-led team has recently travelled to Spain. On top of the military inspection trips, the OSCE also undertakes civilian observer trips, and the OSCE is also leading the negotiations for the release of their own inspectors.

The four German members of the observation team belong to a special Bundeswehr 140-strong inspection team based in Geilenkirchen, North Rhine-Westphalia. According to the German Defense Ministry, it was being accompanied by the Ukrainian police. It remains unclear how the OSCE were recognized - they were not carrying any special equipment - though the separatists claimed they were carrying explosives and ammunition.

Opinion: Dare to protest against Putin

Sanctions against individuals are just pin-pricks in the fur of the Russian bear. Europe's governments are attempting to respond prudently to Putin's aggression - its citizens should be outraged, says DW's Bernd Riegert. (28.04.2014)

Tough economic sanctions would hurt Russia more than Europe, economist Georg Zachmann tells DW. He argues the EU should do more to support the Ukrainian economy. (28.04.2014)

Ukrainian Prime Minister Arseniy Yatsenyuk tells DW about the danger he sees in current Russian policy in the area. He says that Russia has been waging a new kind of war "for 10 years." (28.04.2014)