Ukrainian Prime Minister Arseniy Yatsenyuk tells DW about the danger he sees in current Russian policy in the area. He says that Russia has been waging a new kind of war "for 10 years." 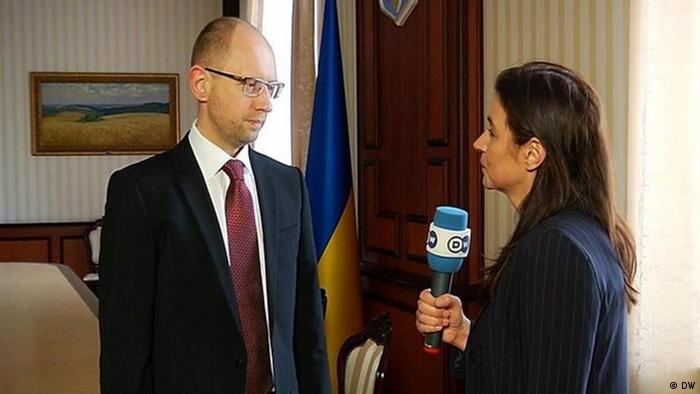 In an interview with DW, Ukrainian Prime Minister Arseniy Yatsenyuk has accused Russia of waging "a new type of war."

"Have you seen these green guys with no insignia on their uniforms?" he said. "Russia has always objected, saying this is not the Russian military. But three days ago, President Putin confirmed that these were Russian soldiers. So I am talking about a new type of war, which Russia already waged."

Talk of third world war is not an 'exaggeration'

Yatsenyuk repeated his view that the situation in Ukraine could escalate into a third world war.

"This is not like previous wars," he said, "but this is the war that Russia started 10 years ago when they first started to bypass Ukraine with the new energy routes." Yatsenyuk said the war had continued with pressure on trade with Georgia, Moldova and Ukraine. Russia had prevented countries from joining NATO by interfering in their domestic affairs. It had taken part of Georgia and then annexed Crimea. "How could I name this? It isn't a war? It's just a peaceful process?"

He insisted that the pro-Russian separatists who were occupying government buildings in eastern Ukraine would be better described as "pro-Russian terrorists." And he stressed that his government's prime aim was to protect civilians, despite the difficult situation.

"We are in a trap," he said. "On the one hand, we need to protect civilians. On the other hand, if we start a comprehensive and large-scale counterterrorist operation, this would lead to a relatively high death toll, including civilian casualties."

But his main purpose was to work together with the US and the EU to use sanctions in order to bring Russia back to negotiations.

Separating fact from fiction in Ukraine

As turmoil continues to grip eastern Ukraine, one separatist has been making a name for himself. Denis Pushilin is the self-proclaimed leader of the Donetsk People's Republic - and until now was completely unknown. (20.04.2014)

As Russia threatens to annex more Ukrainian territory, Oleg Ustenko, economic adviser to the Ukrainian president, wants the EU to agree on even tougher sanctions against Russia.