Unknown takes separatist spotlight in Ukraine | Europe| News and current affairs from around the continent | DW | 20.04.2014

As turmoil continues to grip eastern Ukraine, one separatist has been making a name for himself. Denis Pushilin is the self-proclaimed leader of the Donetsk People's Republic - and until now was completely unknown. 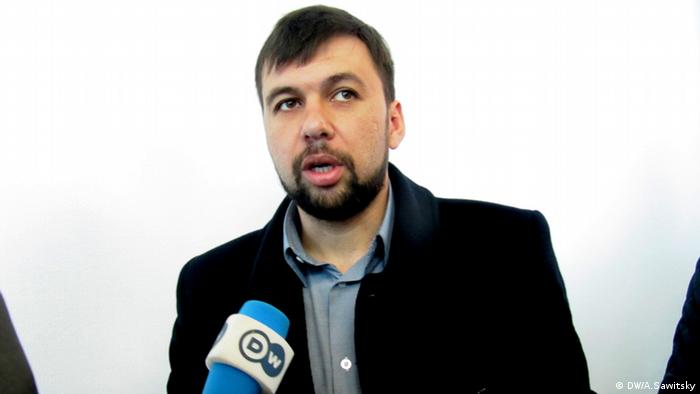 Though several days have passed since Russia, Ukraine and the West called for an end to violence, intimidation and provocation in eastern Ukraine, tensions have yet to ease in the region. Pro-Russian separatists have refused to accept the terms of the international deal struck in Geneva. One young man in particular has made his views clear: Denis Pushilin.

The spokesman for the self-proclaimed Donetsk People's Republic has demanded that the government in Kyiv step down before the separatists agree to lay down their weapons and vacate occupied government buildings. "We agree that the buildings should be vacated. But first, [Prime Minister Arseniy] Yatsenyuk and [President Oleksandr] Turchinov must leave the buildings which they have illegally occupied since the coup," said Pushilin. 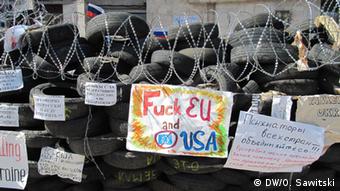 'Never heard of him before'

In the last few days, the 32-year-old businessman has emerged as the spokesman and self-proclaimed leader of the Donetsk People's Republic. Earlier this week he was completely unknown; today, the confident man with the full beard is being quoted in news reports around the world.

This is Pushilin's second attempt at playing politics. According to Ukraine's central election commission, he ran as a member of the party "We Have One Goal" in the 2012 election, hoping to represent the Kyiv region - and failed. His election campaign covered many issues, but mentioned nothing about a special protection for Russians or Russian speakers.

Aside from this earlier attempt at politics, very little is known about Pushilin. He appears to be a fan of boxing and travel, and graduated from school with average results. His Facebook profile features an interview with the Russian news agency RIA-Novosti and many photos, including shots of him in swimming trunks. He doesn't appear to have much of a following on the social network - his posts are only acknowledged with a handful of likes.

Pushilin's sudden fame has irritated many separatists. "I have never heard of him before. It's hard to say where he's come from," said a member of the pro-Russian movement, who asked to remain anonymous. Pushilin presented himself to the people as someone who could be relied on, but ultimately, said the man, he is not so important, simply because the movement has no clear leader.

Smoke screen for others? 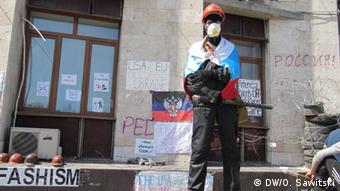 The separatists have made strict demands

This assessment is consistent with that of Volodymyr Kipen, a Ukrainian political analyst and head of the Donetsk-based Institute for Social Studies and Political Analysis.

"These people are quite uninteresting as individuals. Their function is merely to disseminate political manifestos," said Kipen. For him, Pushilin is simply a "puppet" with only one main role: to further destabilize the region. In addition, Pushilin can act as a kind of smoke screen for other, more well-known individuals who wouldn't dare make risky statements in public.

And there is an element of risk for Pushilin. In early March another self-proclaimed "people's governor," Pavel Gubarev, made headlines of his own. But after a few days, the 31-year-old former history student was arrested by Ukraine's security service agency, SBU. The accusation: Gubarev was involved with "attacks on state institutions, a violent attempt to seize power and a conspiracy to destroy Ukraine's territorial integrity." He is still being held in Kyiv.

Pro-Russian activists in eastern Ukraine are refusing to accept an international deal struck in Geneva on Thursday. Instead, they've placed new demands on the government in Kyiv. The city of Donetsk remains on edge. (19.04.2014)