In east Ukraine, a pro-Russian group has declared an independent republic from within an occupied building in Donetsk. DW heads inside to hear from leaders and gauge local moods for a planned referendum in May. 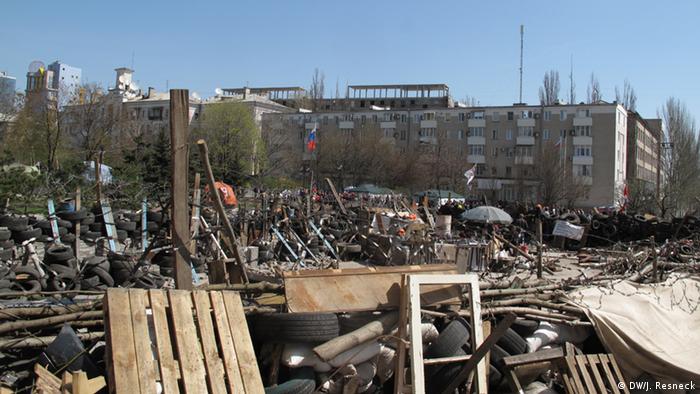 Behind a makeshift barricade of old tires, razor wire and pallets, masked, club-wielding men in worn combat fatigues police the entrance to the capital of the self-proclaimed Donetsk People's Republic.

Since 7 April, when pro-Russia demonstrators seized the Soviet-era administration building for the Donetsk region and declared the republic, daily rallies have been held where crowds in the hundreds to thousands chant slogans that equate the two-month old caretaker government in Kyiv with fascism. 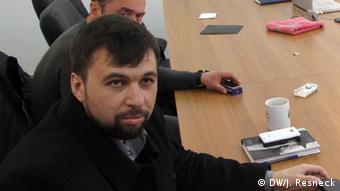 "The Donetsk People's Republic, this was a spontaneous decision, made several hours after [occupying the building]," Denis Pushilin, chairman of the self-proclaimed republic's leadership council, told DW. "There was a need to make a strong decision through this act and declaration."

Supporters of the movement equate the political crisis as larger struggle against political extremism.

"All of Europe should help us against fascism," said 73-year-old supporter Vladimir Khachaturian, who says he has very early memories of the Second World War. "And we don't want more oligarchs who help Kyiv."

Cleavages in Ukrainian society are increasing between those who support a united Ukraine and those who look to Russia as a guarantor for peace and security.

"Nearly 80 percent of the Donetsk region saw the Maidan movement as a coup d'etat - not a legitimate revolution," said researcher Cyril Cherkashyn, whose Donetsk Centre of Political Analysis and Technology polled 547 people earlier this month.

Respondents were about evenly divided into camps over staying with Ukraine - albeit with greater autonomy - or seceding as an independent state or even joining Russia.

Inside the 11-story former administration building, Soviet-era posters warn against excessive drinking or talking to strangers. Anti-American and anti-European Union graffiti adorns the walls as nervous young men in ski masks search visitors as they file in and out of the occupied building. 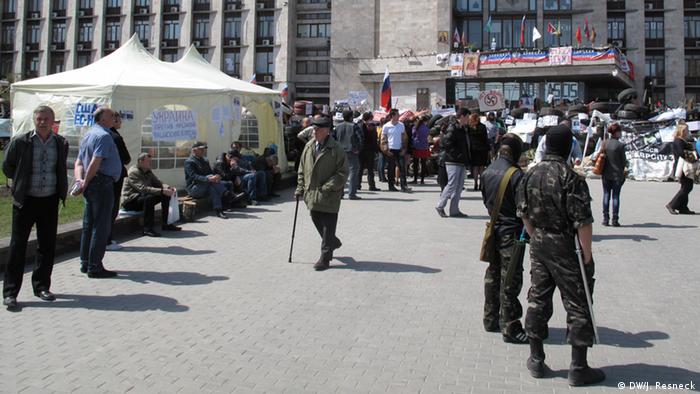 The group does not plan to adhere to the 17 April Geneva agreement signed by Russia, Ukraine, the US and EU

The Ukrainian government has dismissed the occupation of administrative buildings as the work of terrorist extremists, puppets of the Kremlin intent on annexing this industrial region in a repeat of events in Crimea in March.

"That's nonsense," said Pushilin, the secessionist leader. "Russia helps us to keep this conflict from getting deeper. This conflict was started by Kyiv."

He also dismissed the US-brokered Geneva agreement signed by Ukraine and Russia on Thursday, 17 April, which demands that protestors vacate administration buildings occupied in the region, saying his group would do so only if Ukraine's prime minister and president leave the buildings "they are occupying illegally."

Instead, the self-proclaimed leadership is pushing ahead with a 11 May referendum over the region's future, either as an independent state, autonomous republic within Ukraine or adjoined to Russia.

"Either we will become an independent state, or we can rejoin Ukraine within a confederation with more freedom to decide what's good for us, not just taking orders from Kyiv," said Alexander Gnezdilov, spokesman for the self-proclaimed republic. "I personally think most people will vote for joining Russia, but it depends on people's opinion."

Opinion is mixed, and the outcome of any fair referendum is in question. Recent poll numbers show about 26 percent saying they wanted to join Russia, whereas 26.5 percent support remaining within in Ukraine. The rest either wanted to be independent or envisioned a confederated republic of Ukraine with greater autonomy for the regions.

The referendum would be held two weeks before national elections in Ukraine, the latter of which local authorities say they intend to boycott. With neither side recognizing each other's legitimacy - a byproduct of the lack of trust between different political camps - there are doubts as to the legitimacy of such a vote.

On Thursday, pro-Ukraine demonstrators held a rally on the outskirts of the city center. The demonstration was moved just across the river due to safety concerns in the event of clashes between rival factions. A cordon of riot police formed a phalanx to protect the crowd as about two thousand people gathered in the park. 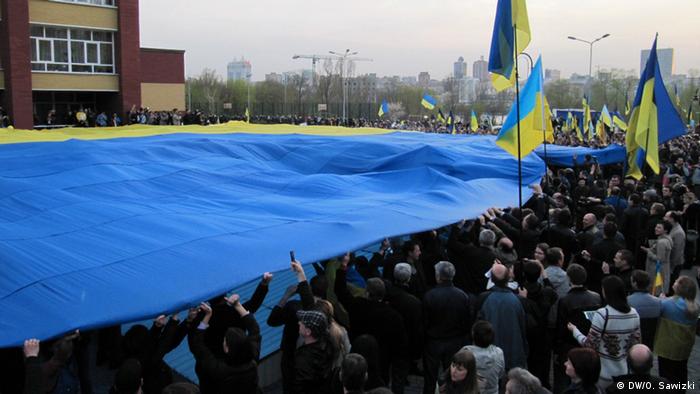 Attending the rally with her mother, 19-year-old university student Olga Dovgalova said she was sickened by the divisions within her own city.

"I have a sort of déjà vu. The Cold War isn't over - the participants are the same - the Iron Curtain between Europe and Russia again, I am tired of this," said Dovgalova, who was born six years after the collapse of the Soviet Union. "I want peace, unity for my country as it was a couple of years ago."

As the rally broke up, hundreds paraded across the bridge, where passing motorists alternated between horns honking in support and occasional jeers of derision.

Back in the center, supporters of the self-proclaimed republic dismissed the rally as orchestrated by students paid to travel from western Ukraine.

There was no evidence of this. No buses picked up the demonstrators. The majority boarded public transportation to head home as dusk settled on the city.

Meanwhile, stick-wielding masked youths patrolled the city center as local police and medics stood by. The masked youths are often found milling around the front of the occupied building, in this case coming to the far end of the square in an apparent search for pro-Ukrainian nationalists on the very edge of their 'territory.'

So far the veneer of civility remains intact, though the peace among Donetsk's own population remains fragile.

Krichbaum: 'Russia needs to extinguish the fire in Ukraine'

Gunther Krichbaum, chairman of the European Affairs Committee of the German Bundestag, welcomes the Geneva agreement, but doesn’t view it as a breakthrough. (18.04.2014)

A government anti-terror campaign to root out pro-Russian separatists in eastern Ukraine threatens to turn into a fiasco. The country's demoralized forces are ill-equipped and defections are commonplace. (18.04.2014)