Berlin: It's the Wurst!

A favorite of chancellors, pop stars and any native son in Germany's capital, currywurst is the real Berlin treat. 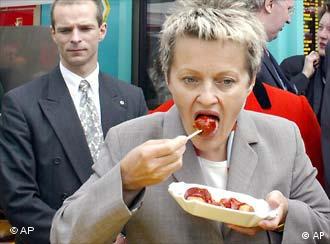 Germany's Minister for Consumer Protection, Renate Künast, is one of millions of fans of Berlin's staple curry sausage.

Which German food has been the subject of a rock ballad, at least one play and two books, and is a favorite of Chancellor Gerhard Schröder?

Be prepared for the wurst. Currywurst, that is.

Currywurst, the ultimate German street food, is designed to be scarfed down while standing on a street corner after a late night on the town -- and don’t forget one last beer chaser.

Yet Schröder recently ordered the "Literarische Currywurst" during a state visit from U.S. President George W. Bush at Theodor Tücher's Restaurant on Berlin's historic Pariser Platz. And after Madonna was snapped eating one during her last tour of Germany, the editor of Berlin's tabloid Bild newspaper said it had all the traits of a good story: a celebrity and currywurst. Herbert Groenemeyer, Germany's answer to Bruce Springsteen, even wrote a song in honor of the homegrown snack.

Indeed, a glance through the press archives shows that anybody who is somebody is offered a currywurst, and the accompanying photo op, at some point during their visit to the German capital, just as visiting dignitaries to New York stop and order "one with everything" at the local hot dog stand.

A skinless pork sausage smothered in curry-laced ketchup, currywurst is sometimes served whole but most often chopped into bite-sized morsels and eaten off a flimsy paper plate. It costs about €2.50 ($2.65).

Currywurst stands can be found in all German cities, but the snack is especially associated with Berlin, where even prior to unification it was popular on both sides of the wall.

OK, so we know that everyone loves currywurst. But curry, that famous export-blend of Indian spices, is alien to the German palate. So where did it come from, and who makes the best? What are the secrets and mysteries behind this icon of pop food-culture?

How the currywurst came to Berlin

In his novella-turned-play, The Discovery of Currywurst, Hamburg-born writer Uwe Timm answers the question of the iconic treat’s origins with questions of his own.

"Most people doubt that currywurst was ever actually invented, let alone by one person in particular," writes Timm. "Isn't it just like those myths, fairy-tales, and legends, the type dreamed up by legions of storytellers, not just one? Did anybody invent the meatball, the boulette? Are these dishes not collective achievements?"

In the end, however, Timm posits that the currywurst does have a specific origin and can be traced to a single individual – who, not surprisingly, comes from his home town. According to Timm, the currywurst was created by Hamburg kiosk owner Lena Brücker at the end of World War II. Sadly, Timm notes, she took the secret of her special sausage spices to the grave.

This version of events is, of course, an affront to any real Berliner. Berlin legend has it that Herta Heuwer invented the currywurst, on September 4, 1949 – and patented it under number 721319.

She has since passed away, so we may never know where the ubiquitous snack had its origins.

The quintessential Berlin Imbiß, or takeaway stand, is Konnopke's, in the former East Berlin. It's been going strong under family management since 1930. Located under the tracks of the U2 subway at Eberswalder Strasse station in Schönhauser Allee, the little shop has the status of an institution, and gets regular mention in the press.

The shop is now run by Waltraud Ziervogel, who took it over from her father. According to Ziervogel, her father "introduced skinless bratwurst – today's currywurst – to East Berlin in 1960. We continued to sell it and I took over my dad's business in 1976, and I've been doing it under his name ever since."

Ketchup is the key

The secret of her success, Ziervogel says, is the ketchup. "The currywurst has to be tasty of course. But the key is making your own ketchup," she says. More details are not forthcoming, however.

As to the debate over the origins of the currywurst, Ziervogel says: "I have no idea, love. Skinless currywurst were around before 1960 in West Berlin. We just copied it."