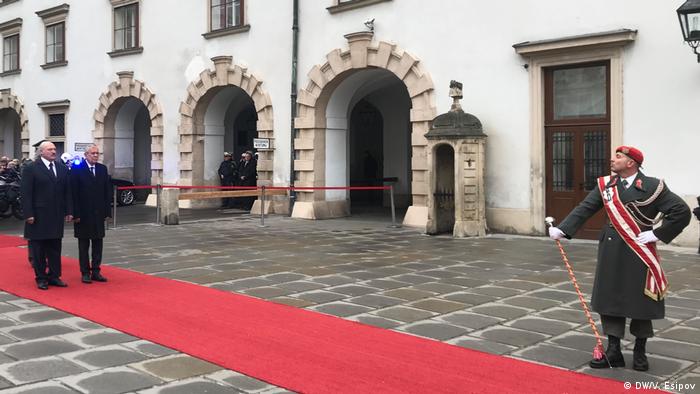 It is his first visit to a European Union member state in more than three years and comes as part of a push for closer ties amid tensions with Russia.

Relations between Minsk and the EU have been virtually frozen for almost a decade, but relations have shown signs of improving. Since the Russian annexation of Crimea in 2014, Belarus has shown increasing friendliness towards the EU, first hosting Ukrainian war negotiations in 2015. A year later, the EU lifted sanctions against Belarus, while Lukashenko released a number of prominent opposition prisoners.

Numerous visits from European leaders have followed in recent years, as he positioned his country as a "reliable partner" for the East and the West. Lukashenko was invited to Austria by Sebastian Kurz following his visit as chancellor to the eastern European nation in March.

Who is Lukashenko? Often called "Europe's last dictator," the 65-year-old is the longest-serving head of state on the continent, having ruled for 25 years. The authoritarian leader of the former Soviet republic has attracted sanctions in the past due to his country's poor rights record and lack of fair elections.

What is to be achieved by the visit?

Austrian political scientist and Russia expert Gerhard Mangott told DW: The visit "is an attempt by the Austrian government to bring Belarus even further out of isolation." The aim is to create an "Armenian model" for Minsk — a gentle economic rapprochement with the EU while maintaining relations with Russia.

Austria is the second-largest foreign investor in Belarus after Russia and is "very interested" in expanding trade, Mangott said. Belarus, which has recently suffered an economic downturn, is also likely to be interested in Western investors.

Activists in Brest are protesting a new lead-acid battery factory out of pollution and health fears. They've demanded answers from President Lukashenko, who's involved in other ways. Juri Rescheto reports from Belarus. (11.04.2019)

Aleksander Lukashenko is in Sochi for three days of talks with Vladimir Putin. The meetings come amidst persistent rumors that Belarus could become part of a single state controlled by Russia — and even ruled by Putin. (13.02.2019)

A Deutsche Welle journalist who was detained in Belarus has been freed. Paulyuk Bykowski was one of a group accused of unlawfully accessing news from the state news agency. (10.08.2018)

Belarus: The Dream of a Dictator