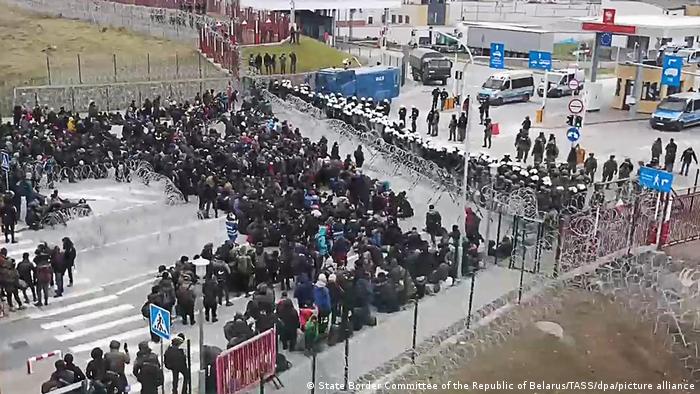 Poland has refused to let the migrants enter EU territory

In a series of posts on Twitter, Poland outlined how officials suspect that Belarus is escorting migrants and refugees to the border.

What did the Polish government say?

The Defense Ministry said the migrants had been escorted from a camp near the border to the border crossing itself.

"The relocation of migrants from the makeshift camp to the border crossing in Kuznica is a planned operation by the Belarusian services," one tweet from the Defense Ministry said. "The action is most likely directed from the command vehicle located at the rear of the former migrant camp."

Poland also accused Minsk of instrumentalizing the migrants for propaganda purposes. A video tweet from the Polish MOD reportedly showed Belarusian media taking out their cameras and documenting the migrants at the border crossing. Poland has blocked access to any reporters in the area.

"Instrumental use of migrants by Belarus," the Polish government said. "Migrants, mainly women and children, are forced to approach the fence so that the Belarusian media can prepare their propaganda materials."

Polish intelligence spokesperson Stanislaw Zaryn said the Belarusian government had been spreading rumors "about the possibility of entering Poland's territory."

One false rumor being spread is that there are buses on the Polish-Belarusian border which will take migrants to Germany. "Whoever spreads these lies puts people in great danger," the German Foreign Office said.

"First of all, it must be said clearly that this is a bad dictator there in Belarus. And there is nothing to gloss over, he has lost all legitimacy," Scholz said on Monday.

Scholz stressed that the EU was right to impose tougher sanctions on Belarus, pointing out that it seemed to show the bloc's determination to take action against Minsk for its role in the migrant crisis.

German Chancellor Angela Merkel and Lukashenko spoke about the migration crisis by phone on Monday.

"The Chancellor and Mr. Lukashenko spoke about the difficult situation on the border between Belarus and the European Union — especially about the need for humanitarian aid for the refugees and migrants there," German government spokesperson Steffen Seibert said in a statement, without referring to Lukashenko as Belarus' president.

The phone call between Merkel and Lukashenko is the first time a western leader spoke with the Belarusian strongman since controversial presidential elections last year.

The European Union on Monday agreed to new sanctions targeting airlines accused of bringing the migrants from the Middle East to Minsk.

"Today's decision reflects the determination by the European Union to stand up to the instrumentalization of migrants for political purposes," EU High Representative for Foreign Affairs and Security Policy Josep Borrell said. "We are pushing back on this inhuman and illegal practice."

Borrell said the sanctions would impact "quite an important number" of individuals and entities for "facilitating illegal border crossings in the EU."

The decision comes after Belarusian President Alexander Lukashenko said he wanted the migrants at the border to return to their home countries.

"We are actively working on convincing these people to head home," Lukashenko told the Belarusian state-run Belta news agency.

Lithuania, Latvia and Estonia said Belarus must be held responsible over the migrant crisis.

"We ... condemn the actions taken by the Lukashenko regime instrumenalizing migrants for political purposes," the leaders of the three Baltic countries said following a video meeting with Polish President Andrzej Duda.

Latvia on Saturday began a military drill near the country's border with Belarus. Latvia has deployed 3,000 troops for the exercise, which is expected to continue until December 12.

Iraq said it would begin repatriating its citizens from the Polish-Belarusian border region starting on Thursday.

"Iraq will carry out a first flight for those who wish to return voluntarily on the 18th" of November from Belarus, Iraqi Foreign Ministry spokesman Ahmed al-Sahaf said.

Kremlin says Lukashenko not to blame

The Russian government said Monday that Lukashenko is not behind the crisis at the border.

"Lukashenko is not creating the situation that is taking place at the border," Kremlin spokesperson Dmitry Peskov told journalists. "It is completely wrong to place all the blame on Lukashenko."

Peskov said Moscow is ready to mediate between the EU and Belarus to resolve the crisis. Russia is a major ally of Belarus.

French President Emmanuel Macron and Russian President Vladimir Putin spoke by phone on Monday, with the two sides agreeing on a "deescalation" of the migrant crisis.

White House spokesperson Jen Psaki urged Russia to intervene in the situation and stop the exploitation of migrants by the Belarusian government.

"We are still calling on Russia and encouraging them directly to use its influence to press the Lukashenko regime to cease its callous exploitation and coercion of vulnerable people," Psaki said.