Winter's arrival has sparked calls for urgent aid to the migrants stranded at the Belarus-Poland border. The EU is preparing fresh sanctions against Belarusian authorities. 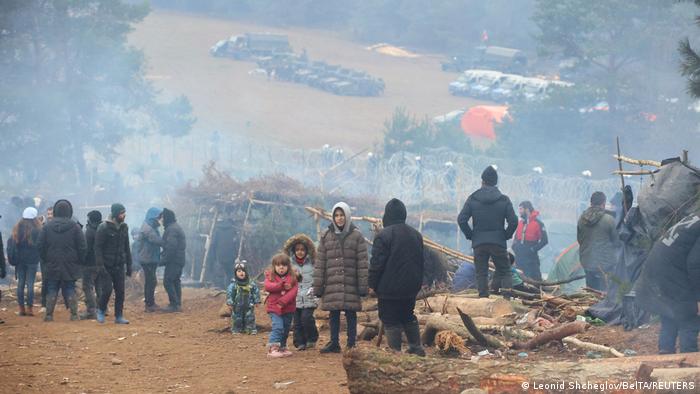 Poland says thousands of migrants are trapped at the border

The president of Germany's lower house of parliament, the Bundestag, on Sunday called for EU countries to provide swift help to migrants on the Polish-Belarusian border.

"People are being brought to the EU border under a false promise," Bärbel Bas told the newspapers of the Funke media group. "We must not allow people and their fate to be used as leverage."

Bas said a speedy European response was required and insisted that Germany was on the side of those EU states affected by Belarus' migrant push, namely Poland, Lithuania and Latvia.

"Europe must quickly come to an agreement on how these people can be helped," she said.

Bas also spoke out in favor of stronger border fortifications, saying that while "fences and walls at the borders should be dismantled wherever possible… unfortunately, given Lukashenko's policies, this is unthinkable."

The EU says Belarusian President Alexander Lukashenko's government has for months been helping migrants to fly into Minsk before driving them to the country's borders with Poland, Lithuania and Latvia and illegally pushing them into EU territory.

Up to 4,000 migrants are currently waiting in makeshift camps at the Polish border, according to Polish officials. Rights groups have described their conditions as dire, with temperatures now below zero due to the onset of winter. Nine deaths have been recorded so far.

Annalena Baerbock, the co-leader of Germany's climate-friendly Green Party, which is in negotiations to form the next coalition government, said there was now an urgent need for humanitarian aid.

"Aid organizations must be allowed into the closed border area immediately," she told Bild am Sonntag newspaper. "I appeal to the Polish government to make this possible and to accept the EU's offers of support — also with regard to joint border protection."

The premier of the eastern state of Saxony, Michael Kretschmer, said Germany should not feel pressured to give shelter to the migrants.

"We are not allowed to accept these migrants into the EU or Germany," he told Bild am Sonntag.

"We have clear rules on immigration," Kretschmer added, referring to EU refugee and asylum policy or Germany's policy of welcoming skilled workers.

"Neither is the case with the migrants who were lured by Lukashenko. We have to show the dictator in Minsk that this measure will not be successful. Then he will stop the [people] smuggling."

Fifth round of sanctions

On Monday, EU foreign ministers are expected to adopt new sanctions against Belarusian state airline Belavia, for its alleged role in transporting migrants to Minsk.

Brussels has levied four previous rounds of sanctions against Lukashenko's regime in response to his disputed election in August 2020 and subsequent bloody crackdown on anti-government protesters.

"We will give the green light to extending the legal framework of our sanctions against Belarus so that it can be applied to everyone who participates in smuggling migrants to this country," the EU's top diplomat Josep Borrell told French weekend newspaper Le Journal du Dimanche.

On Saturday night, a group of about 50 migrants managed to push through a barrier and enter Poland, according to Polish police.

Police said on Sunday that they had rounded up 22 Iraqi nationals so far.

A separate attempt to break through the border near the town of Kolonia Klukowicze was unsuccessful, they said. But one officer was injured when the migrants threw stones at the authorities.