Christie's London sold a painting portraying a healthcare worker as a superhero for €19.5 million on Tuesday, the most ever paid for a work by Banksy, who donated the work to a Southhampton hospital last May. 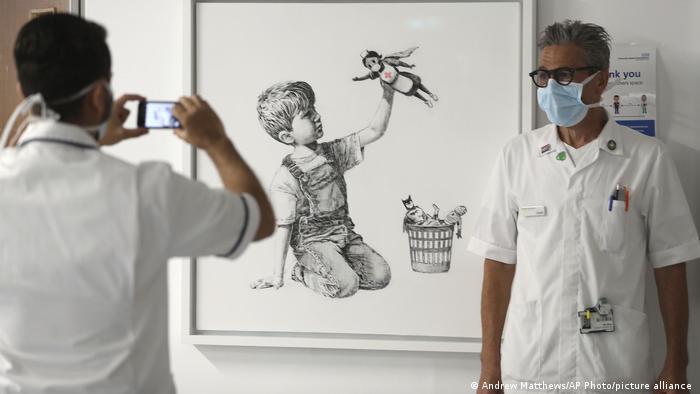 "Game Changer," a one-meter-square (three-foot-square) black-and-white painting of a child playing with a toy nurse as superhero by the artist Banksy sold at Christie's auction house in London for a record £16.7 million (€19.5 million / $23.2 million) on Tuesday, the most ever paid for a work by the anonymous artist.

The painting of a young boy hoisting a caped and masked nurse aloft — Batman and Spiderman relegated to the waste basket behind him — was donated to the University Hospital Southhampton by the artist last May, in appreciation for the service of frontline workers from the UK's National Health Service (NHS) in fighting the coronavirus.

It is said the work arrived with a letter reading: "Thanks for all you're doing. I hope this brightens the place up a bit, even if it's only black and white."

Christie's says the Southhampton Hospitals Charity will use proceeds from the sale to "fund well-being projects for staff and patients," and to "distribute to a wider community of healthcare providers both within the NHS and charitable sectors."

"This incredible gift will be invaluable in helping us to focus on promoting and protecting the welfare of our staff as they heal and recover from the last year," said David French, interim chief executive officer at University Hospital Southampton.

Speaking of the artist and the painting — which had an estimated sale price of €4 million and was hammered down at €16.7 million — Katharine Arnold of Christie's called Banksy, "an extraordinary artist who is a constant barometer of nationwide sentiment."

"With the perfect image of a little boy playing with his superhero doll; a nurse sporting the International Red Cross, he perfectly captured the essence of this moment in time," said the European contemporary art expert.

A reproduction of the work will take the place of the original at the hospital for patients, visitors and workers to enjoy.

The funding the painting will provide is much needed across the UK healthcare landscape. The NHS in particular is a chronically underfunded behemoth that can never keep up with the demands put on it by an aging population despite annual budget increases.

That strain means that early screening for illness might not be done and waiting times at hospitals and physicians' offices are exacerbated by shortages of healthcare workers that have in turn been further negatively impacted by Brexit.

A 2018 Organization for Economic Cooperation and Development (OECD) study comparing 21 countries found that the UK had among the lowest per capita number of doctors, nurses and hospital beds in the Western world, with only Poland having fewer doctors and nurses, and only three —Canada, Denmark and Sweden — having fewer beds.

The OECD also found that the UK had cut the number of hospital beds in the country by half — down to 100,000 — over the past 30 years.

The live-streamed sale at Christie's took place on the one-year anniversary of the first lockdown order issued by Prime Minister Boris Johnson. To date, more than 126,000 UK citizens have died from the coronavirus.