Promoted as "the most valuable Banksy collection," the new Berlin exhibition featuring works by the elusive street artist can leave fans with a bitterly ironic aftertaste. 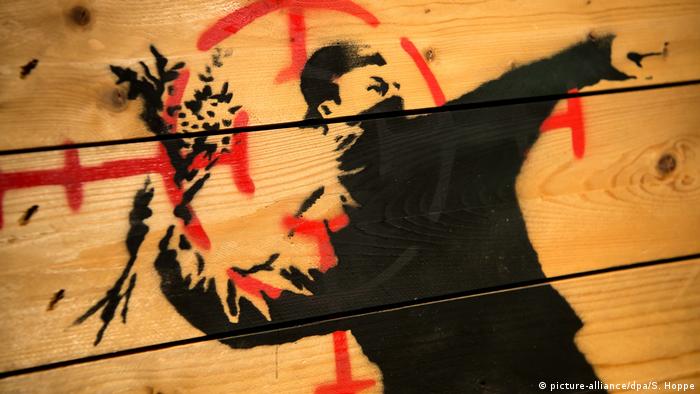 Banksy remains one of the most mystifying cultural icons of our times. His meteoric rise has brought him acceptance that few other "vandals" enjoy: Local authorities have commissioned his exhibitions - some have even apologized for removing his graffiti, despite its illegality.

Banksy's journey has been remarkably ironic, to say the least. His insistence on anonymity turned him into one of the most prolific graffiti artists of the street art movement. His sarcastic and anti-establishment messages delivered him into the laps of fortune makers and celebrity buyers, who took the streets back to the galleries and started trading his work for millions.

Whether he likes it or not, Banksy has come to be absorbed by the establishment he mocks, and the trajectory of his success symbolizes the collusions and tussles between artists and dealers; the tempestuous interdependence between those who champion artistic integrity and those who monetize it.

"The Art of Banksy" is an unauthorized traveling exhibition that opened in Berlin Friday, after shows in Antwerp, Istanbul, Amsterdam and Melbourne. It showcases almost 80 pieces of art, including some of Banksy's most popular works (for example, "The Girl and the Balloon"), as well as previously unseen oil paintings.

The exhibition charges visitors 20 euros (over $22) for the privilege of seeing something they could have seen on the street for free. And if any of them wish to purchase one of the prints, they are put in touch with the curator. 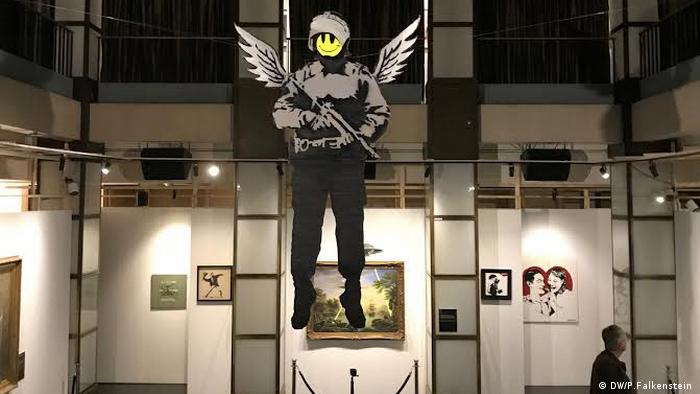 The Art of Banksy exhibition in Berlin

The exhibition is curated by Steve Lazarides, a former friend and agent to the elusive artist. The pair parted ways in 2008 in unexplained circumstances. Lazarides says the exhibition will probably anger his former client, who remains a staunch critic of such commercial projects. But this has not stopped Lazarides from going ahead. Works taken from private collections can be exhibited without the consent of artists, and this is one of those instances.

I can't believe you morons actually buy this sh**

The result is controversial. There is something jarring about viewing street art in the sanitized environment of a commercial art gallery, and it is hard to ignore the irony that the exhibition tries to sell art that is essentially meant to be free to the public. "Sale ends" (2006) shows figures kneeling in religious fervor in front of a sign that reads "Sale Ends Today," reminiscent of the hordes that congregate on Black Friday, the shopping day following US  Thanksgiving Day.

"Morons" (2007) depicts the scene of an auction where a framed canvass with the words "I can't believe you morons actually buy this sh**" is sold at a ridiculous price. The works make no effort to hide the artist's contempt for commercialization, and one wonders about a consumer's sense of self respect when they spend a fortune on something that insults their desire to own it. 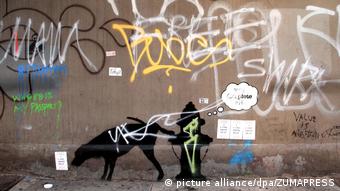 Old Skool: A defaced view of the 'Peeing Dog' by Banksy in New York City, 2013

Landing in the trophy cabinet of millionaires

The exhibition shows an awareness of these issues, and tries to refute expected criticisms. It features previously unseen oil paintings - obviously not meant for the streets - and tries to restore some dignity to the prints by evoking a sense of urgency normally associated with the impermanence of street art: Viewers are reminded that the exhibition is a one-off experience, and the likelihood of such displays in the future is very slim.

Yet, the message fails to fool the viewer. It does not come across as "get a look before the establishment elites remove it off the walls;" but rather, "take a last look because these establishment elites might never let you look at this again." There is something inherently depressing about that message, especially when one interprets it in light of Banksy's own words: "When you go to an art gallery you are simply a tourist looking at the trophy cabinet of a few millionaires."

The issue here is not just of consent, but also the ethos of the street art movement. Does street art belong in the street, or can it be displayed in galleries? Banksy has often said that street art should be displayed where it belongs: on the street, where people can access it without buffers and barriers. Yet he has been central to its commercialization too. He is an effective brand manager, a shrewd businessman; he knows that people's fantasy is a stronger marketing tool than reality. 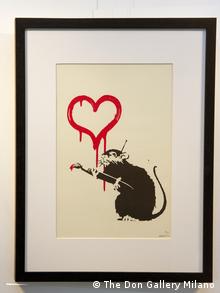 Banksy embodies the controversies and paradoxes that have long dogged the street art movement. The fact that street art defies ownership is what gives it the edgy reputation it enjoys today, but it is precisely this reputation that has made it commercially valuable and treading the line between the two presents difficult choices for artists who wish to make a living off their art.

Banksy's film "Exit Through the Gift Shop" (2010) critiqued the commercialization of street art but also acknowledged the limitations of such criticisms. In response to a question about the film, he once wrote: "It seemed fitting that a film questioning the art world was paid for with proceeds directly from the art world. Maybe it should have been called "Don't Bite the Hand that Feeds You."

Can the movement fend off the predatory advances of private art collectors and dealers? Banksy suggests that there may not be an escape from the inevitable need for commercial sustenance. And perhaps, the last nail in the coffin of artistic idealism is the literal gift shop that concludes this unauthorized exhibition.

Against his will: works by street artist Stik on display in Munich

Heralded as the latest Banksy, street artist Stik is at the center of a new exhibition in Munich - the first of its kind in Germany, but one being held without the artist's consent. (07.04.2017)

Banksy among street art trailblazers on show in Munich

Kicking off this Easter, an exhibition in the Bavarian capital features provocative, politically-engaged urban art from across 20 nations. Enigmatic street art legend Banksy is among the exhibitors. (12.04.2017)