All of its 10 rooms face the controversial West Bank wall, and none receives more than 25 minutes of sunlight a day. True to style, British street artist Banksy's newest creation is thought-provoking. 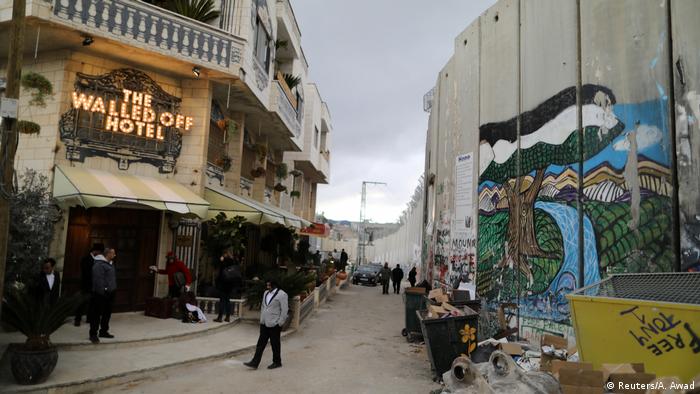 The Walled-Off Hotel - a reference to the actual location and an onomatopoeic turn on "Waldorf Hotel" - opens its doors to the public on Saturday. With accommodations ranging from inexpensive soldiers' bunk beds to a presidential suite, it is only five meters (16 feet) from the wall - illegal under international law - separating Israeli-controlled areas from Palestinian territory.

"Walls are hot right now, but I was into them long before Trump made it cool," said the artist known as Banksy - his true identity is a well-kept secret - in a statement on Friday, when a handful of reporters were allowed to visit his self-described "three-storey cure for fanaticism, with limited car parking."

Banksy has previously adorned the Israeli West Bank barrier wall and war ruins in Gaza with his own graffiti. His own creations now also adorn the hotel. They include a wall mural overlooking a bed in one of the guest rooms that depicts a pillow fight between an Israeli soldier and a hooded Palestinian. At another spot, cherubs on life support hover over a piano.

As expensive collector's items, Banksy's works sell for six-figure sums. Another of the artist's notable creations is "Dismaland," a grim take-off on an amusement park in Weston-super-Mare, in Somerset, England. 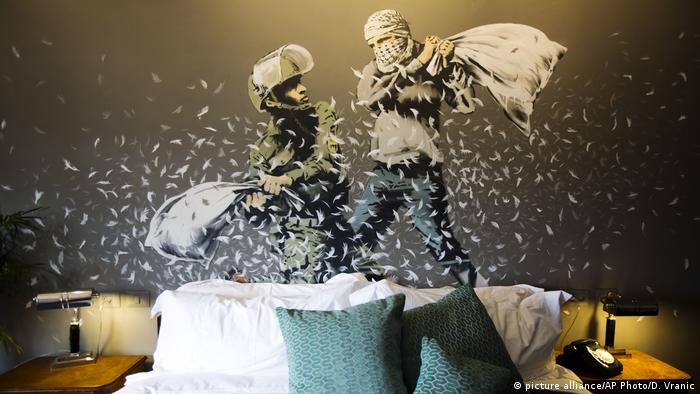 A gallery, a museum - and nothing left to chance

Banksy had his hotel in Bethlehem built secretly over a period of 14 months on the site of a former pottery workshop. The upper storey rooms lie directly opposite Israeli watchtowers. In the presidential suite, water for the Jacuzzi flows from an ostensibly bullet-ridden interior tank.

At a location accessible through control points to Israelis, international tourists and Palestinians, the reclusive artist hopes to increase awareness of everyday life among Palestinians living on walled-off territory while bolstering the economy of a community whose tourist industry has suffered under increasingly severe travel restrictions. The hotel also houses a gallery where works of Palestinians who might not otherwise get international exposure are on display.

Built in century-old colonial style, the hotel is opening on the centennial of the Balfour Declaration, a statement by the British colonial rulers of Palestine that led to the founding of Israel decades later. A likeness of former British Foreign Secretary Lord Arthur Balfour himself sits at a desk near the entrance. 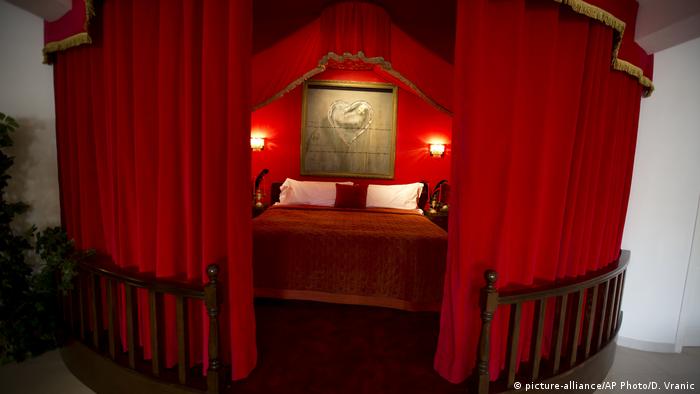 In the presidential suite

No detail of the complex was left to chance; even the books on shelves were chosen carefully, including titles such as "A Room With a View" and "Cage Me a Peacock."

The hotel also includes a small museum, curated in consultation with Gavin Grindon, a professor at Essex University, that explains the wall and the history of the region. But even the video presenter concludes on a thought-provoking note: "If you are not completely baffled, then you don't understand," he says.

The hotel opens for overnight guests on March 20.

A group of Afghan artists has painted graffiti on the walls of government buildings, businesses, and embassies in Kabul. They call themselves the Afghan "Banksy." Monica Bernabé shows us some of their work. (04.11.2016)