Snowmelt in the Alps and volatile weather patterns have caused rivers across Germany to burst their banks. Europe's most important shipping routes have been closed off to traffic, with some areas facing evacuation.

Days of heavy rain and melting snow have caused water levels of the Rhine, Moselle and Danube rivers in Germany to rise, with authorities warning flooding is likely to continue through the weekend.

The Rhine in the country's southwest has witnessed a particular surge in recent days after the Eleanor weather pattern brought rainstorms to the entire continent. Shipping traffic through the city of Cologne was halted on Sunday after the river breached the 8.3-meter (27-foot) mark. It is expected to climb to 9 meters on Monday, well above the normal water level of 3.5 meters in this part of the Rhineland.

A spokeswoman for the flooding authority further south in Mainz said that the river had already burst its banks at several locations upstream and that water was still "rising intensely." The situation is expected to ease by Tuesday.

Read more: After the thaw, Germany braces itself for flooding

High tide along the Rhine

The Rhine reached 7.79 meters in Düsseldorf, the state capital of North-Rhine Westphalia, on Sunday. Authorities have erected fortifications along the city's harbor to prevent any water from entering low-lying parts of the old town. The council has also made around 40,000 sandbags available to residents threatened with inundation. A number of restaurants along the river said they may have to close if the waters continue to rise.

In the former German capital Bonn, water has spilled over onto the promenade along the left bank of the Rhine, which has been sealed off from public access.

Villages south of Bonn have started fortifying their defenses, with residents living along the river being told to take measures to ensure their homes are safe from flooding.

Shipping operations, including ferries crossing the river, have been severely limited in many parts of the Rhineland and are expected to cease completely if the river reaches 9 meters. This could happen if the Moselle River, which flows into the Rhine, continues to rise as well. 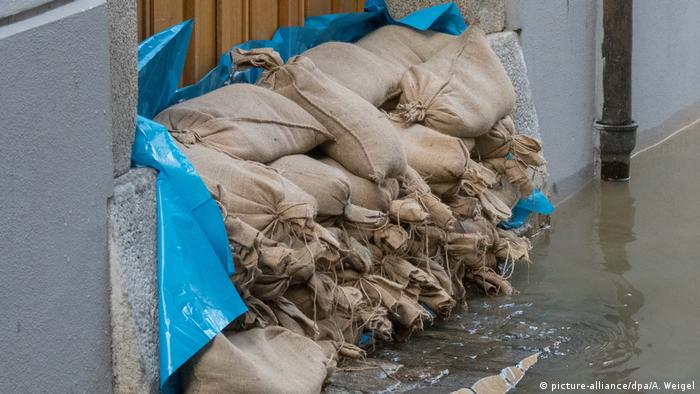 Some areas are preparing for even greater floods with sand bags

Water levels along the Moselle in the state of Rhineland-Palatinate have also been surging and are expected to continue to do so. The river, which crosses three European countries, has reached almost 7 meters, with another 60 centimeters (2 feet) expected over the weekend.

In tourist villages like Cochem along the Moselle, the river has spilled over into streets and shipping has been stopped altogether for several days.

"People are piling up sandbags, pumping out their cellars and emptying their homes. We hope that the situation will improve soon," Arno Simon, mayor of the Moselle town of Ürzig, told German press agency dpa.

The situation was also critical along the Danube River in southern Bavaria, where some houses have already been inundated.

Evacuations might have to be ordered if the river rises further, and locals have been advised to be prepared for more flooding.

The Neckar River in southwestern Germany was also closed to commercial shipping, with water spilling over into some parts of local villages and towns. Locals have been advised not to park their vehicles close to the riverbank in case of further flooding. The popular tourist city of Heidelberg had to cordon off parts of its historic old city because of moderate flooding there.

The Main, Saar and Weser rivers were also affected, but to a lesser degree.

The impact of the flooding, though relatively mild compared to previous river surges, is already expected to cost hundreds of millions of euros in public funds.

Read more: After the thaw, Germany braces itself for flooding

Clean up efforts have dramatically improved water quality in the Rhine River in recent decades, attracting bathers back to its shores, but a dip in this busy river may be less hygienic than many think. (29.08.2011)

Most of Germany's major rivers have swollen to double and triple their usual levels. Authorities are working day and night to keep the floods at bay. So far, there has only been limited material damage. (06.01.2018)