Swimmers unaware of dangerous bacteria in Rhine | Environment| All topics from climate change to conservation | DW | 29.08.2011

Clean up efforts have dramatically improved water quality in the Rhine River in recent decades, attracting bathers back to its shores, but a dip in this busy river may be less hygienic than many think. 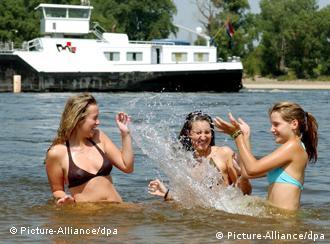 Despite the growing number of swimmers, the Rhine is not safe

For years, word of the Rhine's cleanup has been attracting bathers back to what was once one of Europe's most heavily polluted waterways, but it may still be dirtier than people like to think.

"Especially from the microbiological risks, swimming in the Rhine is not a good thing," said Martin Exner, director of the Institute of Hygiene and Public Health at the University of Bonn.

It's a message that's likely to leave a sour taste in the mouths of locals.

For those living along the Rhine – which passes through some of Germany's most densely populated territory – the river provides the closest feeling to a beach this side of a long trip to the coast.

In summer, it's a popular destination for picnickers and – increasingly – swimmers, eager to rejoice in the Rhine's success story. 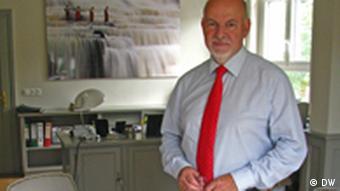 It's not so long ago that the Rhine was a stinking mess.

According to RheinEnergie, a local water utility, by the 1950s heavy industry and agriculture had filled the river with pollutants like cadmium, mercury, lead and ammonia.

A fire at a chemical production warehouse in 1986 dumped enough highly toxic pesticides into the water to decimate fish populations over a "flow distance of several hundred kilometers," a 2006 report reads.

Since those days, more than 50 billion euros ($72 billion) have been spent cleaning up the Rhine and building new water treatment facilities. The last ten years have been especially successful. Fish populations have returned and the river is nearly free of industrial chemicals.

Every year, more swimmers are jumping into the Rhine, thinking that if they stay in the shallows, away from the river's strong current and heavy barge traffic, the water cannot hurt them.

Yet Martin Exner says that there are plenty of other dangers to bear in mind, despite the success of industrial cleanups. For instance, sewage.

While modern sewage treatment plants are able to remove most contaminants from wastewater, dangerous levels of E. coli are still being released into the Rhine, he told Deutsche Welle.

Exner said wastewater enters treatment plants with E. coli levels of about 10 million parts per 100 milliliters. The treatment plants reduce the E. coli in the water significantly, to about 100,000 parts, but that's still 200 times higher than what Exner said is a safe level for humans.

Exner said even if a swimmer tries to keep from swallowing river water, on average one still ingests between 50 and 100 milliliters. This exposes swimmers not only to E. coli poisoning, but other contaminants like giardia and norovirus.

And the risks aren't limited to the water one swallows. Exner said humans can also catch leptospirosis from rat and mouse urine in the Rhine. The virus enters the body through a rash or cut and can lead to a high fever, diarrhea and vomiting.

On a recent hot afternoon, 21-year-old office worker Lina Hembd and her friend Sara Rempel waded into the Rhine up to their knees, playfully splashing each other.

Lina said she gets in the river about once a week when it's warm, but she doesn't put her head under. Why? She said she was "scared of the fish." The water quality however, didn't bother her at all. 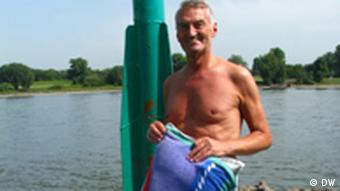 David Zeitler, another local enjoying the Rhine's beaches, said he had no problem jumping in all the way to cool down.

When asked whether he felt the water was clean enough, he nodded.

"Yes it is. Just look at it. There are so many fish swimming. It must be clean water," he said.

Some longtime residents remember the years of chemical pollution the Rhine suffered.

"I knew the Rhine much more polluted than it is now," said 68-year-old Heins Wonnef.

"20 years ago, I wouldn't have even tried (to go into the water), but now I think it's no problem…Of course, I would not recommend drinking the water."

Exner still has hope for the future of the Rhine's water quality. He said other European cities, such as Cannes in France, are using much more advanced ultra-filtration technologies in their water treatment plants that can turn wastewater bacteriologically sterile.

That's his hope for the Rhine, someday.

In a decade of two, he said, the Rhine could be truly clean again. Of course, the cleaner the river gets, the more attractive it will be to the fish.

So Lina Hembd will probably still not put her head under.

The environmental downside to desalinated water

As water becomes increasingly scarce, more and more countries are looking at the option of seawater desalination. But at what cost to the environment? (23.08.2011)

A field research project is following 90 Cologne-based households that are trying to change their lifestyles to help protect the climate. The state's consumer protection watchdog is keeping tabs on the volunteers. (12.08.2011)