Austria's Chancellor Sebastian Kurz has criticized French President Emmanuel Macron's proposals for Europe. Macron has called for a reform of the EU, with controversial ideas including an EU-wide minimum wage. 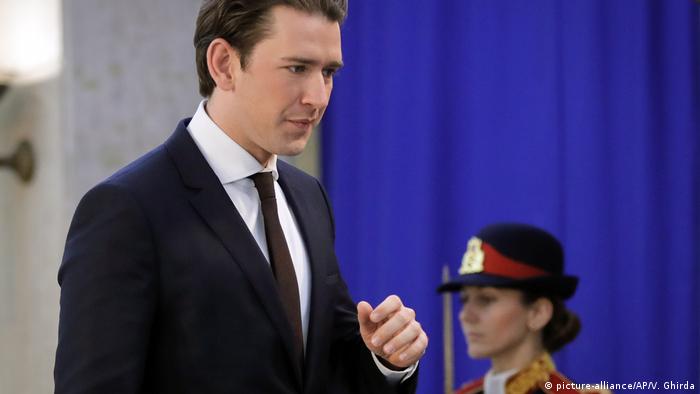 Austria's conservative Chancellor Sebastian Kurz on Tuesday responded to French President Emmanuel Macron's ambitious vision on the future of Europe, saying some of the proposals could even be "dangerous."

Macron's statement, which was published last Tuesday in major newspapers in every EU country, criticized populism while outlining a vision for EU social and regulatory reforms.

Kurz, in an interview with German broadcaster ARD, agreed with some of Macron's proposals like border protection and regulating internet companies. But he stopped short of joining Macron's calls for a European "social shield," which would include an EU-wide minimum wage.

"I believe that many of the suggestions are utopian, when I think of the proposal for a social union, or a European minimum wage," said the chancellor, who heads Austria's governing Austrian People's Party (ÖVP).

Kurz said a minimum wage plan may sound good, but added it was "completely impossible" because of disparity in living standards across the EU.

"Do you think that German car makers would open production sites in Hungary or Poland if the salaries were exactly the same as in Germany?" he said.

Responding to Macron's calls for the pooling of EU debt, Kurz said such a move would be "dangerous."

"It is already attractive enough for countries to accrue debt," he said, adding it could lead to taxpayer cash flowing out of more fiscally sound countries to countries with debt issues.

Some of Kurz's statements were similar to those published in a statement Sunday by Germany's Annegret Kramp-Karrenbauer, the head of the CDU party and prospective successor to Chancellor Angela Merkel.  Kramp-Kannenbauer disagreed with the "communitization of sovereign debt" and the "europeanization" of social systems.