Auschwitz survivor: ′Every night I dreamed of food′ | Germany| News and in-depth reporting from Berlin and beyond | DW | 26.01.2015

Auschwitz survivor: 'Every night I dreamed of food'

Starvation, torture, murder: The horrors that millions of people experienced in the German concentration camps are indescribable. DW's Naomi Conrad met survivors who returned to Auschwitz 70 years after its liberation. 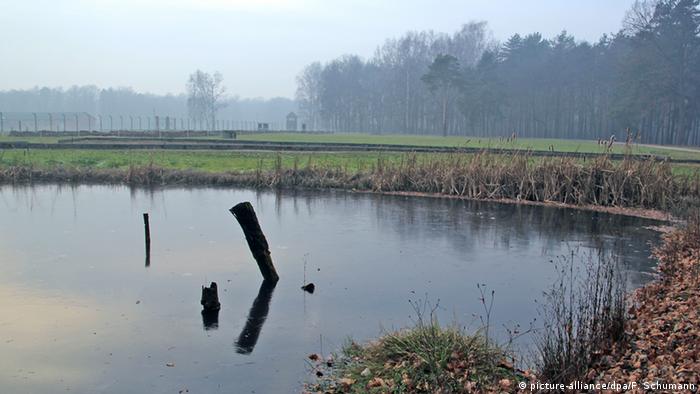 As the bus trundles past the grey and somewhat derelict train station in the Polish town of Oswiecim, the rusty railway tracks dusted with snow, an old man suddenly starts to cry: His rasping, haunting sobs echo through the bus, which has fallen silent. His wife whispers softly in his ear, slowly stroking his arm. She clutches his arms as the two alight from the bus and make their slow, laborious way through the slush to the main entrance to the museum of Auschwitz to join the throng of journalists and survivors: men and women who, despite the desperate odds, lived through the starvation and countless other horrors of Auschwitz and other German concentration camps and have returned, 70 years after the camp's liberation by the Soviet Red Army on January 27, 1945.

As he walks past a group of Italian students laughing and jostling at the ticket counter, Natan Grossmann, his shoulders hunched against the icy-cold wind, recalls the endless nights in Birkenau, a satellite camp of Auschwitz. "Every night, I used to dream that my mother was making food for me, huge plates of delicious food." His smile is twisted: His mother, father and brother were all murdered by the Nazis. At 15, Grossmann was all by himself, first in the concentration camp, and then on the long, forced death march as the Red Army advanced and the Nazis forcefully relocated their prisoners to camps inside Germany. He shrugs: Some nights, he would wake up and realize that he hadn't dreamed of food. "That would make me incredibly sad."

'This can happen again'

As Grossmann reaches the infamous entrance to Auschwitz, its contemptuous "Arbeit macht frei" in huge black letters across the gate, he is whisked away by one of the organizers, who arranges a cluster of survivors under the gate, faced by a crowd of cameramen and photographers. Pressed against a hut next to the barbed-wire fence, Jeffrey Tuchman, a cheerful middle-aged documentary filmmaker looks on. "If the media had been here back then," he says, "maybe someone would have stopped the murder." He shrugs: He says his father, Marcel, never wanted to be one of "those professional survivors" who tour schools and churches to recount the horrors of the Holocaust. But, then, as his father realized that the generation of survivors was dying out, leaving no one to tell the story in the face of growing number of Holocaust deniers, he changed his mind, Tuchman says.

A few feet away, on the other side of the fence, his father is surrounded by four journalists and a cameraman. Why, a young journalists asks, is he in Auschwitz and how does it feel? Marcel Tuchman, who survived the death camp because a German engineer selected the then-21-year-old for slave labor in the Siemens factory, chooses his words carefully, deliberately: "The Holocaust didn't happen overnight," he says. "There were sparks already. So the major message is that this can happen again." And, he adds, he came to honor the voices of those silenced forever in the gas chambers of Auschwitz and its satellite camps, where, it is estimated, more than 1 million people died.

'It's not exactly a vacation'

Another journalist butts in: But how does he feel, being back? Tuchman’s smile is wry: "Well, I can tell you, it’s not exactly a vacation." But, he adds, he didn’t survive to feel self-pity, but to make the most of life. He teaches medicine, he says, and "I teach my students how to be humane." He smiles.

To his left, another throng of journalists has surrounded Samuel Beller, who was born in Oswiecim, only to be locked behind Auschwitz's gates. "I survived five years and eight months of torture beyond description," he says into the nearest microphone. His voice is hoarse and angry. "This is a painful history. It should be told a thousand times." His voice breaks, but he talks on. "Young people today just don't know enough about it!"

Behind him, groups of tourists are slowly picking their way through snow that covers the straight lanes that slice through the rows of stone barracks, stopping to take pictures of the gallows where dozens were hanged, the wooden guard house and the barbed-wire fence. Inside Hut 5, the Italian school children have stopped in front of a glass pane: Behind it is a huge mound of human hair, some still plaited - hair that was shaved off the heads of children, women and men after their arrival. Many were immediately sent to die in the gas chambers: A huge pile of empty rusting cans that had contained the cyanide is displayed behind another pane. A middle-aged man takes a picture on his smartphone, then stares at it without moving, ignoring the other visitors crowding round him to see.

Outside, an old Polish man, wearing the thin, striped, blue-and-white prison uniform under a thick coat, is slowly walking down the main road, trailed by a German camera team. At the gate, Marcel Tuchman turns to his son and whispers, "I don’t want to visit, ever again." His son nods: "It’s alright Dad, you don't have to." His voice is quiet, soothing.

As the bus takes the survivors and their families back to their hotels in Krakow, most of them are silent, staring at the snow-covered fields and villages outside. Then a survivor, a vivacious woman sitting in the back of the bus, strikes up a conversation with her young neighbor: Snippets of their conversation drift down the bus. Maybe, the survivor says, her voice full of warmth, "you should try online dating. You know, some young people do meet their partner that way."

Reinhard Strecker lives a quiet life now - but he was once feared by ex-Nazis who became top judges and prosecutors in postwar Germany. Ben Knight meets the man who uncovered the German judiciary's Nazi past. (26.01.2015)