The Australian-run detention center on Manus Island was declared illegal in 2016. But hundreds of men remain on the island, stuck in legal gridlock. DW looks at the current state of affairs on the island. 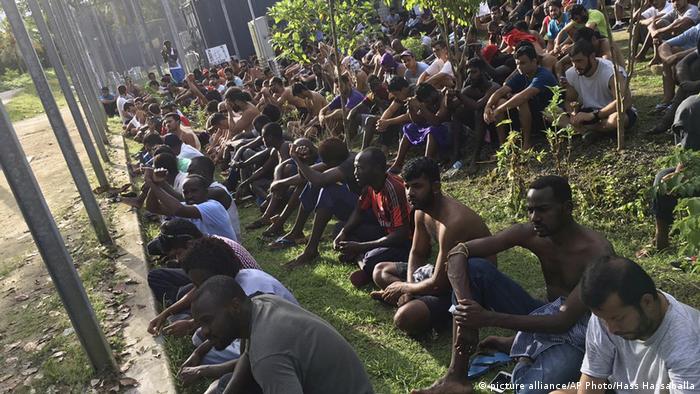 Australia's controversial detention center on Papua New Guinea's (PNG) Manus Island was shut down in October 2017. But roughly 600 asylum seekers remain on the island, many living in legal limbo and gripped by despair.

"The current situation is very bad and unsafe," Sudanese asylum seeker Abdul Aziz Adam told DW from Manus Island. Adam has been living in detention on Manus for nearly four and a half years, after he fled Sudan fearing for his safety. "We are hopeless and powerless and many of us gave up."

After PNG's supreme court ruled the detention center "illegal and unconstitutional" in April 2016, the detained men, mostly from Iran, Afghanistan, Myanmar, Syria and Pakistan, were forced to leave the camp and relocate to "detention transition facilities" on the island. The transition centers are located in the township of Lorengau; temporary shipping-container-style buildings that are "overcrowded," says Adam.

While some 84 asylum seekers have been sent to the United States, under a deal agreed between Australian Prime Minister Malcolm Turnbull and former US president Barack Obama, many remain caught in a legal gridlock in PNG – unable to stay and unable to go.

"They are stuck," Marcella Brassett, campaign manager for the Melbourne-based Asylum Seeker Resource Centre (ASRC), told DW. "The US deal is moving really, really slowly – there is no timeframe, so people have had medical checks done as part of the process that have now expired and they don't know what is going to happen to them," she said.

"They have no freedom of movement – they can walk around the Manus center or go to the markets or the doctor, but they can't leave the island and they can't work. They don't have any papers."

Although US President Donald Trump has expressed his dismay over the repatriation deal, calling it "dumb," he has agreed to honor it. But this is of little reassurance for those Manus-bound asylum seekers from Sudan, Somalia, Syria, Iran and Iraq, for whom resettlement in the US is an unlikely prospect due to Trump's January 2017 travel  ban on nationals from seven Muslim-majority countries.

Only 70 percent of men on the island have been determined to be genuine refugees by the PNG government, in a process that Brassett says is "flawed" and lacking in transparency.

The remaining "negative status" men reside in a separate transit centre called Hillside Haus and cannot be deported because their home countries will not allow it. "People who have not been successful have had risk assessments done [by the UN] which say it is unsafe for them to go home. But they haven't been accepted to live in PNG so they are living in awful limbo with nowhere to go," Brassett said.

This makes them effectively stateless, according to prominent Australian barrister, Julian Burnside AO QC, which means they have no nationality with which to make rights claims. "They're in legal limbo, like those in a similar situation in Australia," he said. "At least PNG's constitution prevents them being held in detention: in Australia, people adversely assessed (or rejected on character grounds) who can't be removed are held in detention indefinitely."

But for the remaining men on Manus – many of whom have been there for nearly five years and whose futures are far from clear – PNG's legal ruling has done little to change their circumstances on the ground.

Even if they were permitted to live in PNG, Brassett says this is not considered a safe option. Four asylum seekers have died on the island of Manus since 2012, and two more died in Australia after contracting illnesses on Manus and being transferred there for treatment.

"Many people don't feel it is safe. Although there is some support from the community, there is also a lot of resentment because they [asylum seekers] have been there for so long. There have been a lot of security issues and a lot of violence," Brassett said.

Just last week Behrouz Boochani, a writer and an Iranian refugee on Manus, reported that a fellow asylum seeker had been stabbed repeatedly with a screwdriver.

The prevalence of depression and post-traumatic stress disorder on Manus is among the highest ever recorded. The UNHCR's Asia Pacific bureau head, Indrika Ratwatte, described the "shocking" psychological state of the men after visiting in March 2018. "Clinical psychiatrists and professionals have determined that around 80 percent of the asylum seekers and refugees in Nauru and Manus are suffering from post-traumatic stress and depression," he said at a press briefing.

Although the Australian government has already conceded to pay A$70 million ($53 million, €47 million) to nearly 2,000 people it held on Manus between 2012 and 2016, there are concerns over how the asylum seekers will access this money without the rights to open bank accounts, and the government has given no indication it will resolve the uncertainty for the remaining men.

"The really appalling thing about this is that Australia has its offshore processing regime because our politicians make it look like a kindness: they say they are worried about asylum seekers drowning (careless, cruel people smugglers, etc). But if people tried to get here and did not drown, we punish them by putting them on Manus or Nauru, where they have so far been held for about five years. That's a bizarre way to show your concern."

No one knows when, or if, the men will be resettled, and for Adam, almost five years of waiting has eroded any sense of optimism he once had. "We actually lost hope a long time ago," he said.

Papua New Guinea police cleared and sealed off a former Australian immigration detention center after the last 300 asylum-seekers were taken away in buses. The men said they feared for their safety outside the camp. (24.11.2017)