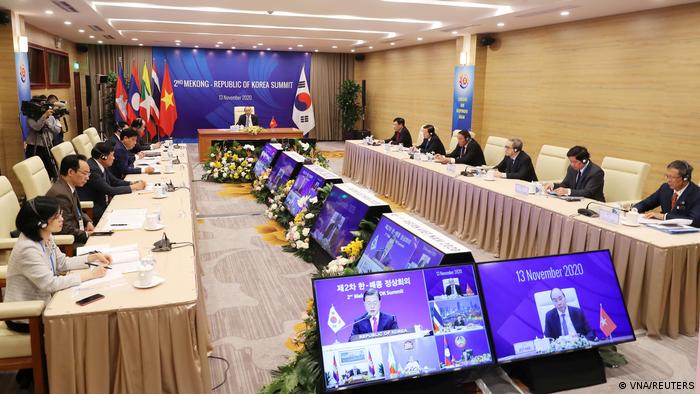 Fifteen nations in the Asia-Pacific region have entered into the world's largest free-trade agreement, which they hope will accelerate the recovery of their economies, ravaged by the coronavirus pandemic.

The Regional Comprehensive Economic Partnership, or RCEP, was signed on Sunday on the sidelines of the annual summit of the Association of Southeast Asian Nations (ASEAN), held via videoconference due to the pandemic.

The virtual summit was hosted by Vietnam which held the rotating chair position in the run-up to the event.

The RCEP deal, signed eight years after negotiations first began, covers 2.2 billion people and a third of the world's economy. It had previously been expected that the deal would be signed in early 2020.

However, environmental protection and labor rights are not part of the deal.

An open door for India

The China-backed agreement is seen as an alternative to the Trans-Pacific Partnership (TPP), a now-defunct Washington trade initiative. 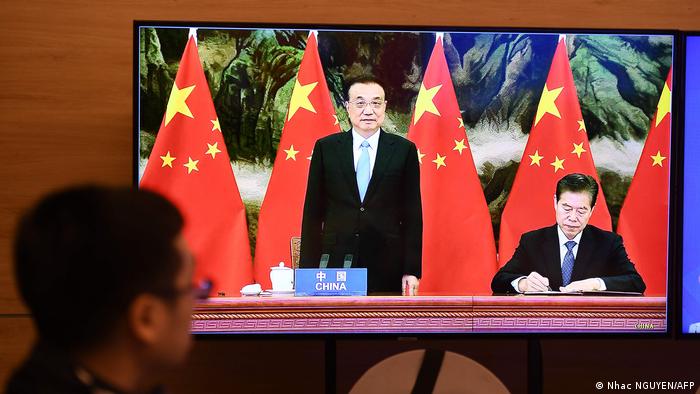 A notable absentee was India, which withdrew from the RCEP negotiations last year citing concerns over opening up its agricultural and manufacturing sectors to more foreign competition.

ASEAN leaders have said they still intend to expand trade with India and that the door remains open for New Delhi to rejoin the bloc.

Japanese Prime Minister Yoshihide Suga on Saturday reaffirmed his government's support for "broadening a free and fair economic zone, including a possibility of India's future return to the deal, and hope to gain support from the other countries."

Read more: APEC summit: Free trade in Asia in the age of protectionism

The trade deal allows China — by far the biggest economy and the most populous country in the region — to cast itself as the "champion of globalization and multilateral cooperation," Gareth Leather, senior Asian economist for Capital Economics, said in a report.

Countries around the world are facing an economic slowdown in the aftermath of the pandemic-induced lockdowns. Indonesia recently slid into its first recession in more than two decades, while the Philippines saw its economy contract by 11.5% in the latest quarter.

The RCEP deal does not include environmental protection and labor rights or commit countries to open services and other vulnerable areas of their economies.

It does, however, set rules for trade that will facilitate investment and other business within the region, said Jeffrey Wilson, research director at the Perth USAsia Center.

"RCEP, therefore, is a much-needed platform for the Indo-Pacific's post-COVID recovery," Wilson wrote in a report for the Asia Society.

The Chinese premier, Li Keqiang, celebrated the signing of the deal in a speech given at the summit, saying: "The signing of the RCEP is not only a landmark achievement of East Asian regional cooperation but also a victory of multilateralism and free trade."

Read more: The real winners of the US-China trade dispute

Vietnam, which had been chairing ASEAN at the time of the summit, handed over its responsibilities to Brunei during the closing ceremony.

Vietnamese Prime Minister Nguyen Xuan Phuc expressed his satisfaction with the deal, saying: "I am very pleased that, after eight years of negotiations full of difficulties, today we end negotiations on the Regional Comprehensive Economic Partnership (RCEP) and officially sign it during the 37th ASEAN Summit."

Australia hopes the trade deal will improve its relations with China, its biggest trading partner.

Ties with Beijing became frayed earlier this year after Canberra called for an international inquiry into the source of the coronavirus, which first erupted in the central Chinese city of Wuhan in late 2019. The row escalated to a trade dispute which hit a dozen Australian industries and threatened exports to China of agricultural products, timber, and resources worth billions of dollars.

"The ball is very much in China's court to come to the table for that dialogue," said Australian Trade Minister Simon Birmingham.

"It is crucial that partners like China, as they enter into new agreements like this, deliver not only on the detail of such agreements but act true to the spirit of them," Birmingham told The Age newspaper.