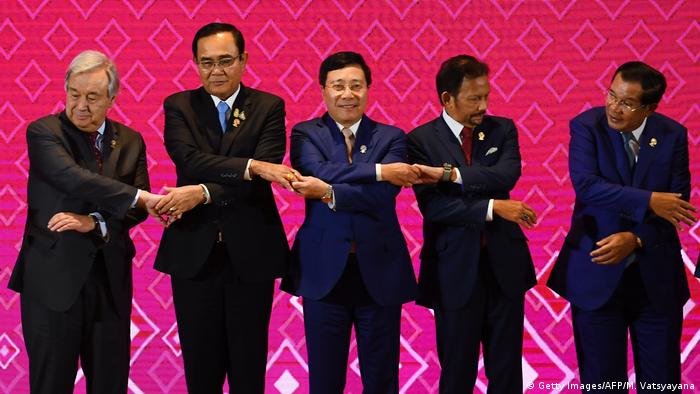 An agreement to create the world's largest trade bloc will be signed by Asian countries in 2020, the Thai government said Monday.

Thailand, which is hosting the three-day Association of Southeast Asian Nations (ASEAN) summit in Bangkok, had previously said it hoped to conclude negotiations on the trade deal by the end of the year.

Read more: Free trade in Asia in the age of protectionism

The new trade area, known as the Regional Comprehensive Economic Partnership (RCEP), involves the 10 ASEAN members, plus China, Australia, New Zealand, India, Japan and South Korea. If implemented, it would be the world's largest free trade bloc, comprising nearly half the world's population and about a third of GDP.

The trade war between China and the United States has taken a toll on export-dependent Southeast Asian countries. Economic growth in the region is projected to slow this year to its lowest level in five years, making the signing of the deal more pressing for many ASEAN members.

Speaking at the summit's formal opening, Thai Prime Minister Prayut Chan-o-cha called for a swift agreement "within this year to stimulate economic growth as well as trade and investment."

"The early conclusion of RCEP negotiations will lay the foundation for East Asia's economic integration," a statement from China's Foreign Ministry said on Sunday.

RCEP negotiations had stalled over India raising concerns about the impact a flood of cheap Chinese goods could have on local businesses.

Some countries have also raised the possibility of moving ahead without India. Discussions on the deal will resume when member states meet on Monday afternoon.

Tensions over the contested South China Sea were also on the agenda at the ASEAN gathering. After meeting with leaders, Chinese Premier Li Keqiang said Beijing was ready to work with countries in the region to ensure long-term peace and stability.

Li said significant progress had been made on a legally binding code of conduct, which is due to be completed by 2021. The document has long been an aim for ASEAN countries, which reject China's vast maritime claims and accuse Beijing of encroaching on their territory.

ASEAN is made up of Indonesia, Thailand, Singapore, the Philippines, Malaysia, Vietnam, Brunei, Cambodia, Myanmar and Laos.

Leaders were also due to discuss air pollution, illegal fishing and further economic cooperation before the summit ends on Monday.

For the first time, the US will conduct naval exercises with a coalition of Southeast Asian countries amid tensions over territory in the South China Sea. The US said the drills will help "maintain maritime security." (02.09.2019)