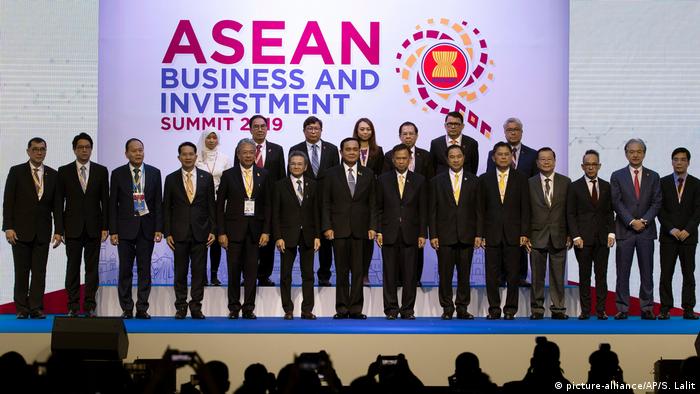 Southeast Asian countries should speak with "one voice" to safeguard their interests in the face of protectionism, Malaysian Prime Minister Mahathir Mohamad said at the start of the regional summit on Saturday.

Officials were hoping to present an initial agreement on a free trade bloc in the region during the three-day meeting in Bangkok.

The 10 members of the Association of Southeast Asian Nations (ASEAN) have long been wrangling over a plan to create a free trade area.

'If you go it alone, you will be bullied'

"ASEAN is quite a big market for the whole world. We don't want to go into a trade war," 94-year-old Mahathir told business leaders at a meeting on the summit's sidelines. But "if they do things that are not nice to us, we have to be not nice to them."

In a reference to US President Donald Trump, who is locked in a damaging trade war with China, Mahathir said: "If the person is not there, maybe there will be a change."

"We should have one voice," he added. "If you go it alone, you will be bullied."

The trade war between Beijing and Washington has taken a toll on export-dependent Southeast Asian countries, where growth this year is projected to slow to its lowest level in five years.

A draft final statement for the summit, cited by the Reuters news agency, said leaders would express "deep concern over the rising trade tensions and ongoing protectionist and anti-globalization sentiments."

The US, an important ASEAN trade partner, is sending a delegation to the meetings, while China is sending its premier, Li Keqiang. Some officials say this is a sign of the weakening US role as a counter to Chinese influence in the area.

Representatives at the Bangkok summit said they were close to concluding the Regional Comprehensive Economic Partnership (RCEP), which includes the 10 ASEAN nations plus China, India, Japan, South Korea, Australia and New Zealand.

If finalized, it would be the world's largest free trade area, comprising nearly half the global population and about a third of GDP. But negotiations have stalled, with some countries such as India raising concerns about a potential flood of cheap Chinese imports.

"The finalization of the RCEP negotiation has become a key test for ASEAN's capacity to deliver on its often-cited centrality," Marty Natalegawa, a former Indonesian foreign minister, told Reuters.

Besides trade, ASEAN members were also expected to discuss territorial disputes with China over Beijing's encroachment in the South China Sea.

ASEAN is made up of Indonesia, Thailand, Singapore, Philippines, Malaysia, Vietnam, Brunei, Cambodia, Myanmar and Laos.

In an interview with DW, Singapore's Defense Minister Ng Eng Hen downplayed concerns over a major confrontation emerging in the region and said that calling China a regional hegemon was a matter of "opinion." (18.02.2019)

For the first time, the US will conduct naval exercises with a coalition of Southeast Asian countries amid tensions over territory in the South China Sea. The US said the drills will help "maintain maritime security." (02.09.2019)