Artificial intelligence a key challenge for Germany′s next government | Business | Economy and finance news from a German perspective | DW | 21.09.2021

Artificial intelligence a key challenge for Germany's next government 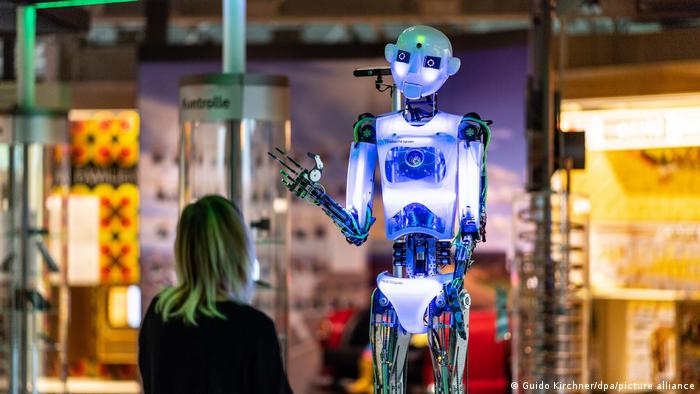 Germany has long been a leader in science and engineering. Now, with artificial intelligence (AI) coming of age, the erstwhile technological trailblazer in western Europe is experiencing some growing pains.

AI is poised to become one of the key technologies of the economic and industrial future. Germany's federal election is just around the corner, and the country's next government will have a laundry list of grievances to address to make the country fit for the AI future.

This isn't news to those leading Germany. Since 2018, the federal government has had a strategy in place aimed at cultivating the use of artificial intelligence at home, backed up by similar efforts on the EU level. Mobility, health care, the digitalization of industry and manufacturing, environmental sustainability and, of course, the coronavirus pandemic were some of the key areas considered in a progress update published last December by Germany's government. The country sees major potential for the integration of AI technologies in these areas, but has identified several hurdles that need to be overcome first.

Germany has long contributed to academic research on the topic of artificial intelligence. But in such a dynamic field, the country needs to do more to stand out globally, the government and experts in the field agree.

For one, to become attractive to international AI talent, Germany will have to improve its reputation in the realm of tech and innovation. In 2019, over 50% of AI job vacancies in Germany either could not be filled or were filled later than wished or with less desirable candidates. Germany has already been grappling with a shortage of skilled labor. Expertise in AI specifically will be even harder to come by.

"Talent is very important both for industry and academia, for both of us," Antonio Krüger, CEO and director of the German Research Center for Artificial Intelligence (DFKI), told DW. "And we need to provide environments that are very attractive to these kinds of people."

The government also wants to encourage the use of AI technology by Germany's all-important small- and medium-sized enterprises (SMEs). The so-called Mittelstand, which generates around a third of the total turnover of German companies, according to the Federation of German Industries (BDI), has been slow to take up the use of AI, despite government efforts. A recent study from the Economy Ministry showed that only around 6% of companies surveyed said they used AI technology.

"It will be crucial that developments in AI can be utilized by these smaller companies," said Krüger. "This means having good interfaces, having good tools, and good cloud infrastructure for AI. And which enables these small- and medium-sized enterprises to put AI into their products and to enhance their product with digital services that rely on AI techniques."

Such developments will rely on Germany making greater strides on digitalization, an area where it has notoriously fallen behind countries like China and the United States.

Germany also wants to use AI to fight the spread of the coronavirus. As part of its coronavirus stimulus package, the federal government has promised to increase its spending on AI from €3 billion ($3.54 billion) to €5 billion by 2025. Most of the funds will be used to develop supercomputing technology in Germany.

"AI can assist in the management of pandemics, for example in pandemic forecasting, monitoring and modeling the course of the epidemic or the effectiveness of different measures, and in research, inter alia in developing vaccines," wrote the authors of the government's strategy update.

Coordinating medical data for these purposes will be particularly difficult in Germany, however, where personal data is largely decentralized and highly protected.

"This, I think, is one of the major hurdles in this respect," said Krüger. "This has been identified. So it's something that we know in Germany, and we are starting slowly to change it. But it's taking too long." He hasn't called for less regulation, however, but instead for greater unification of systems.

AI relies on vast amounts of data to learn and become more effective. The question of when and where to use AI technologies and the data they need will be another puzzle to figure out.

For its part, the federal government wants "to ensure that all stakeholders in the field of AI honor their individual responsibility to respect human rights." AI technology should also be energy- and resource-efficient and contribute to environmental conservation.

Voting on the future of AI

In the upcoming federal election on September 26, AI is on the ballot as well. Most of Germany's five major parties have devoted sections of their party platforms to the topic.

While Germany's right-of-center parties have stressed the importance of AI for preserving Germany's position as an economic powerhouse and industry leader, the left-of-center parties have drawn more attention to its dangers. Used carelessly, they say, the technology has the potential to entrench discriminatory patterns or end up violating the data protection standards that German society holds so dear.

All parties have, however, acknowledged the importance of AI, albeit with different points of emphasis: public sector goods provision for the center-left Social Democrats; ecological and climate monitoring and forecasting for the Greens; industrial competitiveness for the conservative Christian Democrats and the neoliberal Free Democrats.

A likely compromise could take the form of increased funding in the short term while regulatory issues are hashed out.