Just hours before his arrest, the opposition journalist told DW he feared he would soon be behind bars. Independent journalists in Cuba face arbitrary arrest, threats and psychological attacks, Quinones said. 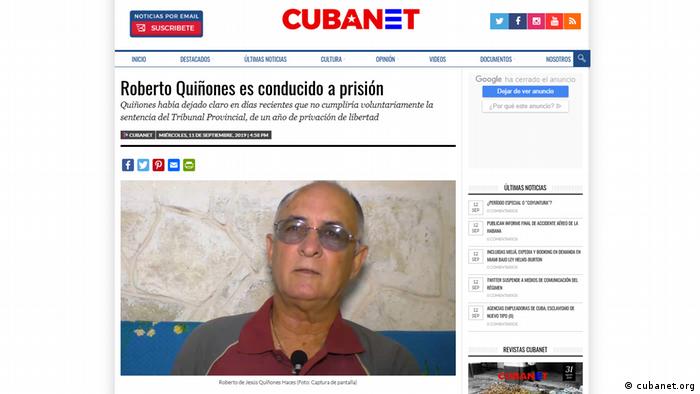 The independent website Cubanet, which Quinones writes for, reported his arrest

In early September, the One Free Press Coalition, of which DW is a member, listed independent Cuban journalist and lawyer Roberto Quinones Haces as one of the 10 most threatened journalists in the world at present. Quinones heard the news from colleagues: "My internet access has been blocked on a almost daily basis," he told DW in an interview this past Wednesday morning.

"They could come get me at any moment," Quinones said in the same interview, referring to Cuban authorities. And, exactly as he predicted, Cuban police arrested him that same afternoon.

The interview is presented here.

Deutsche Welle: Mr. Quinones, what has the Cuban government accused you of?

Roberto Quinones: They have accused me of resisting arrest at the Guantanamo City Court on April 22. On that day, I was at the entrance to the court, speaking with the daughter of Protestant pastors who were facing a court sentence because they want to home school their children. I was barely able to ask any questions before the police approached us. They wanted to arrest me on the spot. I am a lawyer, and I know that I did not break the law. The only thing I did was to ask what I was being arrested for. Then immediately, without any explanation, an officer put my hands behind my back and handcuffed me. The officer pushed me with such force that I fell to the ground. I was then dragged me to their car.

I started to say that this was abuse, and as they drove me to the station, the officer hit me so hard that I was bleeding by the time we arrived. The officer even ruptured one of my eardrums. I was in such bad shape that the station chief told them to take me to the hopsital.

The officer denied any wrongdoing and said I had resisted arrest. I was taken to court and sentenced to one year in prison.

[Editor's note: The sentence was enforced with Quinones' arrest and imprisonment on Wednesday, September 11.]

Are you afraid of what could happen to you in prison?

I am afraid of the violence that I may face for this type of act, but I have a clear conscience. I have prayed a lot, and I ask God for strength every day. It's true, I am afraid, but I also feel the power of others who will be with me.

You had the chance to close the case by paying a fine. Why didn't you?

All of the evidence against me is false, and it incriminates my character. Since there is no evidence in my favor, I see this as a violation of Cuban criminal law.

What does your family think of the situation?

It is difficult for them. I have two children in the United States, and they are worried. My family is also very divided, given the current conditions. Several of my siblings and relatives have criticized me and advised me to respect what the government says. But I don't see things like this. For me, it is a question of dignity, and I can only follow my conscience, even if it pains me to be on poor terms with those I love.

Haven't you ever thought of leaving Cuba to avoid arrest?

I'd like to make clear that I have been asking the US Embassy in Havana for political asylum since 1994. Unfortunately, I've never qualified for acceptance. I have continued defending opposition members and human rights activists. To this day I have never gotten a reply from the US Embassy. But now, at 61, I'm no longer interested in leaving my country. I'll keep fighting for my ideals in Cuba, no matter the cost.

What are the consequences of being an opposition journalist in Cuba?

Fearing for your life. When you experience repression, you begin to prepare psychologically for what could come. You get used to the procedures, but, of course, you know something even worse could happen one day. I have been afraid before, and I am afraid now. My wife says I am paranoid, but I have to be, because I am living under extraordinary pressure and constant pyschological attacks. I get phone calls in the middle of the night, they threaten me, they detain me in my home for nothing. All that has made me a fearful person, because anything can happen here.

How would you describe the state of the press in your country?

It seems to me that the Cuban government is very nervous about what's happening with the independent press. We've spread our reach and many young people have joined our side, and this unsettles the government. Many journalists are tired of working for the state media, where all reporting is ideologically in line with the Central Committee of the Communist Party of Cuba. Independent journalists are rebelling against that, and this is why the government is attacking us.

Do you have a message for journalists in situations similar to yours?

I would tell my colleagues that we all have to look out for one another, and especially for our younger colleagues, because they represent hope for the future of this country. They have to be ready, because it is not easy to be an independent journalist in Cuba.

The third-deadliest country in the world for journalists, Mexico saw nine journalists murdered in 2018. Their deaths are a worrying sign of the state of press freedom — as is increasing aggression toward the media. (19.02.2019)

Thousands of Cubans who built their own data networks at home can now apply for a license, but control over the internet itself stays under state control. Cuba has been one of the least-connected places on the planet. (29.05.2019)

Havana says it will extend the rationing of food and other products in the face of hardened US sanctions. The political and economic crisis in Venezuela is also partially to blame. (11.05.2019)

Press freedom advocates have called for more safeguards from legal attempts to silence journalists. Without them, such lawsuits will continue to pose "a threat to media freedom and public interest advocacy." (21.07.2019)