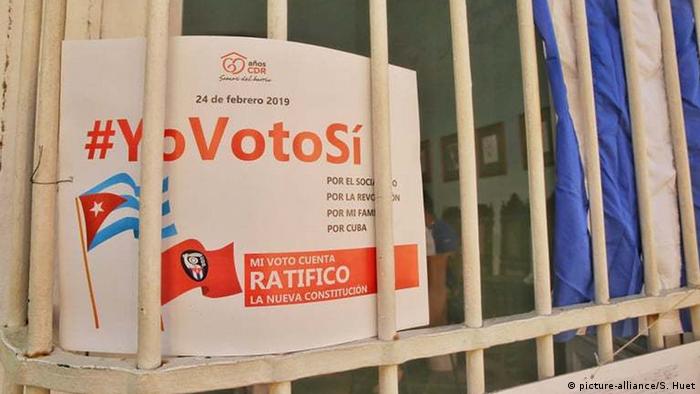 "The constitution has been ratified by the majority of citizens," electoral commission president Alina Balseiro told a news conference.

The constitution entrenches socialism's "irrevocable" role and replaces the 1976 constitution, which had passed with 97.7 percent support.

There are also references to gender identity that could pave the way for gay marriage, and the right to legal representation upon arrest and habeas corpus.

Building a Church – Catholics in Cuba

Since 1959, Cuba has been run first under revolutionary leader Fidel Castro, then by his brother Raul and, since last year, by Miguel Diaz-Canel, the first leader to be born after the revolution.

The government had lobbied heavily for a “yes” vote, labelling opponents as counterrevolutionaries and enemies of the state

It was helped by the near monopoly over the media and information. A simple majority was needed for the changes to pass.

Opponents argued the constitution perpetuates an oppressive regime and some religious groups criticized it due to provisions that eliminate a requirement for marriage to be only between a man and woman.

Cubans became eligible to sign up for data plans on their smartphones. It is a long-awaited, and expensive, development on an island that limited mobile access to the Internet for most people. (06.12.2018)

The new constitution omits references to communism, recognizes private property and enshrines gay marriage. After it passes the National Assembly it will be voted on in a public referendum. (22.07.2018)

In Cuba, the government guarantees everybody a place to live, but away from the tourist sites, the majority of the houses are in stark disrepair. The empty spaces are often converted into parking lots or playgrounds. (25.02.2019)