Are there still Russian soldiers in Belarus? | Europe | News and current affairs from around the continent | DW | 24.04.2022

Are there still Russian soldiers in Belarus?

When Russia launched its attack on Ukraine, some of the troops invaded from Belarus in the north to occupy the areas around Kyiv and Chernihiv. They have now withdrawn — but are they still in Belarus? 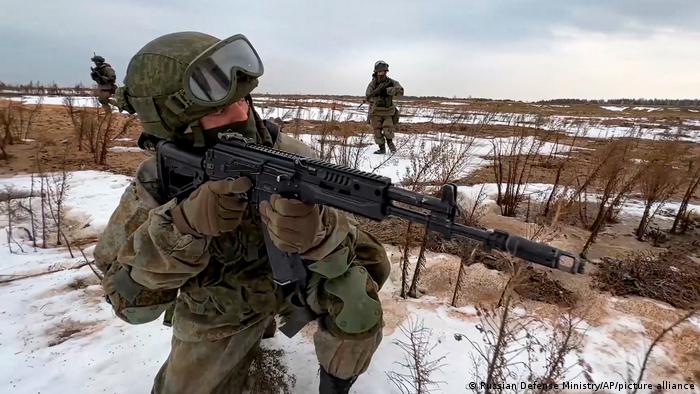 The Russian troop buildup in Belarus began weeks before the invasion, as seen in this image from the Russian government

"You can't compare it with what happened in February or March, when endless columns of vehicles drove past us, first toward Ukraine and then back again," said a resident of the Belarusian city of Mazyr. The woman, who gave her name only as Yelena, was describing Russian troop movements in the first weeks of the war. Now, though, she said they don't often see people in military uniform.

The Russian army was already making its presence felt in southern Belarus before the Kremlin began its war against Ukraine on February 24. It had been conspicuous there for a few weeks, with the Russian and Belarusian militaries holding joint maneuvers in Belarus prior to the initial attack.

It was a tense time in Mazyr, said Yelena, even though the Russian soldiers were stationed in an army camp outside the city.

"We would often see them in the shopping malls, bars and restaurants. I don't know if there were any clashes with the local population; I didn't hear of any, anyway, but the Russians did sometimes act as if they owned the place — very rudely," she said.

When Russian troops withdrew from Ukraine, they brought with them household appliances and other looted items. Yelena said the soldiers set up an impromptu market and tried to sell these things to the people of Mazyr — even much-needed diesel fuel. However, she noted that the soldiers avoided speaking about the "Ukrainian issue."

"They said they were forbidden from talking about it," she said.

Little traffic on the railroads

Military hardware is nowhere to be seen at the Belarusian train stations near the Ukrainian border. Residents of Gomel, Mazyr, and other cities in the region comment on social media that, these days, they seldom see transports of armored vehicles, tanks and other heavy weapons.

"It's usually damaged equipment being taken away that clearly can't be repaired on site," said one Gomel resident.

The fact that the railroad network is now rarely used to transport military equipment may also be a consequence of acts of sabotage against Belarus' railway infrastructure. There have been reports of at least 10 incidences of sabotage in Belarus since the beginning of the war in Ukraine. Some have been officially confirmed by the authorities, and have even been classified as "acts of terrorism." 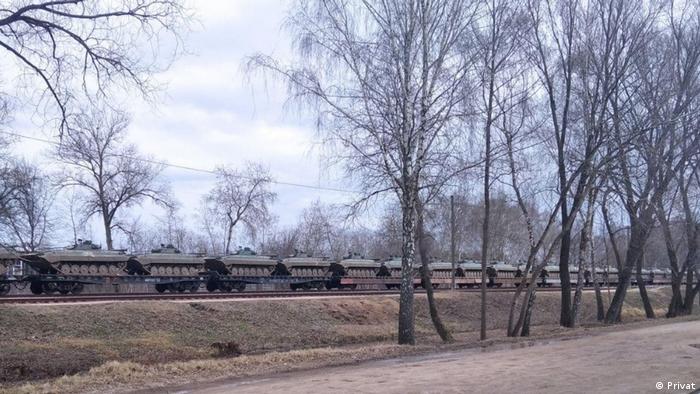 In the early stages of the war, Russia made use of the Belarusian rail network

Prohibited from entering the forest

While Russian soldiers are no longer as noticeable in the bigger towns and cities, the inhabitants of Belarusian villages in the Ukrainian border region are still feeling the presence of Russian units in their woods and forests.

As of April 18, entry to the woods has been either restricted or prohibited altogether in 10 districts in Gomel Region, and in three districts of Brest Region in the far west of the country. Officially, the ban has been imposed because of a high risk of wildfires in the woods and marshes. But the villagers don't believe this — spring has been cold this year, and there have been no reports of any forest fires.

Mikhail, who lives in Almany in the Brest Region, is more inclined to believe the rumors that munitions and weapons have been stashed in the woods. "There's a lot of talk now about how there are still hiding places in our woods and marshlands where the Russian army stockpiled mines and explosives for the war against Ukraine. But something obviously went wrong," he said.

This assumption is also supported by instructions issued by the authorities to the people of the Belarusian-Ukrainian border region. They have been told that they must report any discoveries of weapons, ammunition or explosives, and that anyone who fails to do so will be prosecuted. Locals have said such orders were never issued in the past.

Army units are still on the move in the Belarusian forests, especially in areas of Brest and Gomel that border Ukraine. However, they are no longer made up of Russian soldiers, but units of the Belarusian army. The Belarusian Defense Ministry has stated that "soldiers continue to perform tasks to reinforce sections of the country's southern border." Russian forces have now withdrawn from Chernihiv and the surrounding region

A Belarusian army major, who asked not to be named, told DW that the deployment is officially described as "protection against possible saboteurs and illegal armed groups." In his assessment, though, the current situation on the Ukrainian border does not give much cause for concern.

Nonetheless, in an interview with Belarusian state media, the head of the country's State Security Council, Alexander Volfovich, alleged that it could not be ruled out that there might be "provocations against Belarus" with the aim of "dragging [it] into the conflict."

This article was originally published in Russian