Mother of Russian soldier: Ukraine war is a ′bloodbath′ | Europe | News and current affairs from around the continent | DW | 29.03.2022

Mother of Russian soldier: Ukraine war is a 'bloodbath'

A 26-year-old Russian soldier was killed in the first days of the Ukraine war during an attack on the Hostomel airport near Kyiv. DW spoke with his grieving mother who still defends Russia's actions. Russian troops have faced fierce resistance from Ukrainians, slowing down their advance

On February 24, Russia launched war on Ukraine though Russian President Vladimir Putin continues to refer to the campaign as a "special military operation." Scores of Russian soldiers have been killed since fighting broke out roughly one month ago. But often, neither the soldiers nor their families are told where they will be been sent to fight.

So far, Russia's Ministry of Defense has only twice reported fatality figures relating to its troops. On March 25, authorities acknowledged a total of 1,351 Russian servicemen had been killed in Ukraine. Yet a NATO source cited in the Washington Post estimates roughly 7,000 to 15,000 Russian soldiers could have fallen since February 24. On March 20, Russian newspaper Komsomolskaya Pravda reported 9,861 Russian deaths, citing the Ministry of Defense. The piece was quickly removed from the website, with editors claiming the newspaper had been hacked.

26-year-old staff sergeant Yevgeny was killed in the early days of the war near Ukraine's capital Kyiv. He had never taken part in combat operations before.

Despite losing her son Yevgeny, Natalya (not her actual name) argues the invasion of Ukraine is justified. Yet she thinks Russia's campaign amounts to a full-fledged war, rather than a "special operation."

DW decided to publish this interview with Natalya as a testimonial of a mother who lost her son to the Russian-led war on Ukraine. She makes claims about the origins of the war that contradict current developments. DW has decided to leave her answers unedited as they clearly show the effects of the longstanding propaganda of the Russian state.

DW: Natalya, how do you feel?

Natalja: It is very hard, it hurts deeply. It is not my fault, nobody will bring back my son.

When did Yevgeny enlist?

Right after his exams in 2014, he joined the army. He was sent to a special unit with the foreign military intelligence agency GRU. They offered him a contract but I convinced him not to sign up, as he would had to serve in conflict zones. 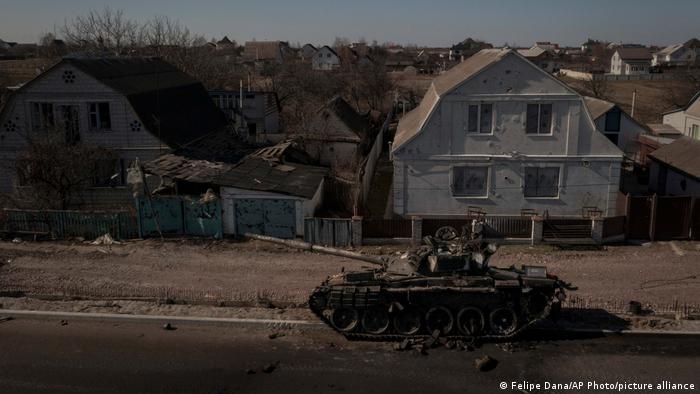 A destroyed Russian tank near Kyiv, photographed on March 10

Afterwards, he made a living working for a security firm and applied to join the police force. He did not like the job, however and decided to return to the army. They took him back immediately, we had only one evening to say goodbye. Yevgeny served in the national guard. He liked it there, rising to become a team leader. His job was to disband protests in Moscow.

He became a father in 2017. He met his wife from his time at the security agency. She moved to join him in Moscow, and they married.

How did he end up being sent to Ukraine?

It was late January, around the 25th or 26th. My son called me, telling me they would be sent to the city of Smolensk [in western Russia, 80 kilometers from the Belarusian border] for drills with Belarus. I asked him: "Are you lying? What drills?" I went online to research the military maneuvers and found that a drill with Belarus had been conducted in the past. I kept searching, trying to find out where we are at war. I did not even think of Ukraine. The next day, I remembered the unrest in Ukraine.

Are you saying you understood you son was not being sent to participate in a military exercise?

Yes. I told Yevgeny I am not stupid and do not believe you are being sent to Smolensk. I kept researching more and realized that he would be going to Ukraine.

I wanted to dissuade him from going. I told him he may not return. He replied: "What are you talking about!" He had no idea where he was being sent. Either they brainwashed him, making him think they really were going to participate in drills. Or he knew what was coming but could not fathom what a bloodbath it would be. I suppose nobody expected that, not even Putin.

Were you in touch after he left?

He left on February 13. I jokingly asked him if he liked Smolensk and what kind of food they were eating. He laughed, telling me everything was fine.

The last time I heard from him was on the morning of February 24, when everything started. He wrote to me using a fellow soldier's WhatsApp account, telling me: "Mum, war has broken out." And I replied: "My son, I can see it on television." And he said: "Can you imagine, an entire unit with our boys was killed at the border." I asked: "Where are you?" To which he replied: "I am in Smolensk, mum."

I think he was somewhere near there. It was only from there near the border that he could have been flown to the airport [Hostomel, near Kyiv]. I told him: "Hang in there, son." And he wrote back: "Alright, goodbye mum. I have to go. Tell my wife everything is fine." Then, we never heard from him again.

I had my phone with me constantly. I spent days watching television, and reading on the internet. I thought maybe I would spot his face somewhere. I went to church everyday, lit a candle and prayed for him. But by then, he was long dead.

Yevgeny was in Hostomel on February 24. He did not die on February 27, as his death certificate says. He was killed much earlier, probably on the night between February 24 and 25.

What makes you think so?

I read online that our soldiers conquered Hostomel on February 24. All our boys were then sent there. But then they came under fire from Kyiv. Our boys were encircled and nobody came to their aid. They were shot at and bombed for a full day. Think about it, the airport is basically an open field.

On February 25, our soldiers regained control of Hostomel. On February 26, they found Yevgeny. But I was only informed on March 8. His unit called me around 1:30 p.m. and told me my son had died in a battle near Rostov [Rostov-on-Don, a city in southern Russia, some 60 kilometers from the Ukrainian border]. I almost lost my mind.

Why did they say he died near Rostov-on-Don?

I do not know why they reported that. Maybe because his body was sent to a morgue in Rostov, and they had no verified information about his death.

Did you ever discuss Ukraine with your son in the past?

To be honest, no.

Do you understand why this war was begun?

I think if we had not started bombing them, the Ukrainians would have bombed us. We had no choice. But something went wrong, nobody saw it coming. Now that so many soldiers have died, we cannot stop. We need to press on until we achieve victory.

Do you understand why Russia is fighting in Ukraine? What was Yevgeny fighting for?

My son fought for us, for Russia and the Russians. So that we can keep using our phones, eat and drink like before. He did not die in vain, he died for us, so that we can lead long, happy lives, so that we don't have to live through war and that bombs fall on us.

In Russia, it is illegal to call this conflict a war. Do you regard this as a war or a "special operation"?

I do not see this as a "special operation." This is a proper war. I am aware we are not supposed to call it that, but it is a war. It's a bloodbath.

The interview was conducted by Oxana Ivanova.