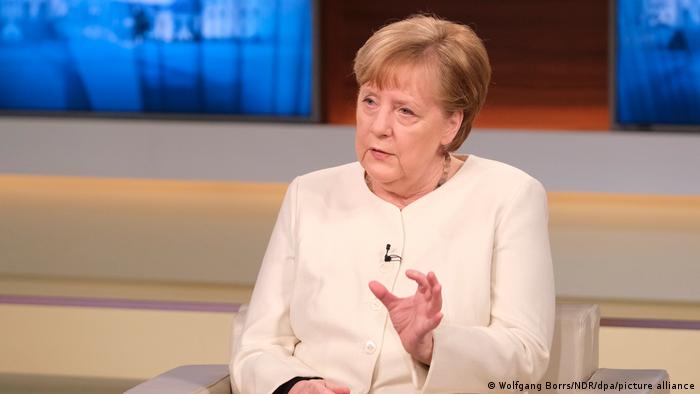 It has been a year of emergency meetings between Chancellor Angela Merkel and her counterparts who lead Germany's 16 states. Often long, late and argumentative, their increasingly confusing outcomes have become symbolic of, and a cause for, shortcomings in Germany's response to the COVID-19 pandemic.

For Merkel, who has usually favored tougher measures than many of the state leaders, last week's meeting with them was the last straw.

"That was a turning point,"she told Anne Will, a journalist for German public broadcaster ARD. "We can't just keep doing it this way."

She criticized state leaders who want to ease restrictions despite rising infection rates. Her rebuke extended to her ally Armin Laschet, new CDU chairman and head of North Rhine-Westphalia, Germany's most populous state.

"There is no leeway for places over 100. That is clearly written in our agreement," Merkel said, referring to the seven-day incidence rate that is the agreed threshold for re-tightening measures.

Laschet, who has his sights set on running for chancellor, has denied he is undermining the so-called emergency brake for loosening lockdown rules.

"North Rhine-Westphalia has implemented the emergency brake for all its districts," he told a gathering of party leaders on Monday.

The back-and-forth has frustrated Merkel, pushing her to consider increasing her own influence in further decision-making. That would suit some of the state leaders just fine, such as Bavarian leader Markus Söder, who hails from the CDU's sister party, the CSU, and is also believed to have ambitions for the chancellorship.

"If Chancellor Merkel wants to take more initiative at the national level to change the rules and set out clear guidelines, she has my full support," he told ARD on Monday. 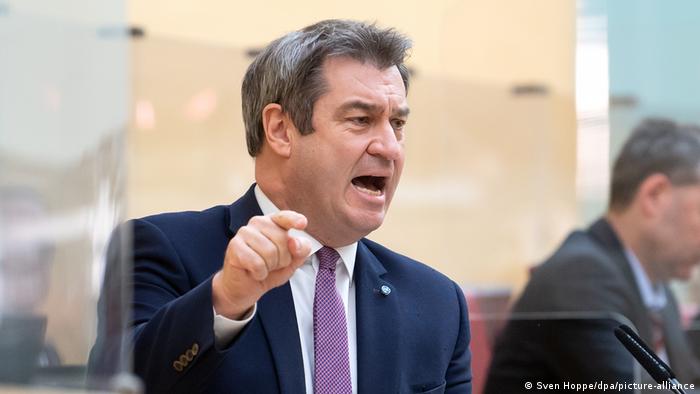 CDU plummeting in the polls

Merkel's Sunday night interview on Will's popular political talk show was a rare media appearance for the outgoing chancellor. With the exception of moments of extreme crisis, such as the influx of migrants in 2015 and earlier in the pandemic last year, Merkel tends to let her spokesperson and other government officials do the talking in TV interviews.

However, Germans are growing restless from repeated lockdowns — none of which have ever gone as far as those in countries like Italy or France — a sluggish vaccine rollout and stubbornly rising infection rates.

The frustration is showing in the polls. Merkel's conservative party, the CDU, has been crashing, down some 15 points from last year when the government was widely praised for its competent handling of the first wave of the pandemic.

The Greens, long seen as a likely junior partner in the next government with the CDU, have been making steady gains. They have benefited from new urgency to address climate change and the electorate's disenchantment with the current "grand coalition" of CDU/CSU and the center-left Social Democrats (SPD), the other traditional big-tent party. CDU Chairman Armin Laschet, state premier of North Rhine-Westphalia, has been on the defensive

Cascading misfortunes for the conservatives, which include a pay-for-play face mask scandal that has led to resignations of CDU/CSU lawmakers, may have changed assumptions about general elections in September and Germany after Merkel. This has put the Greens within striking distance of taking the top spot in a possible coalition, and would give Germany its first postwar government not led by either the CDU or SPD.

"The CDU doesn't have any claim on the chancellory," Merkel told Will, although her party has led Germany for all but 15 years since 1949.

The CDU needs a lot to go right over the next several months if the party is to get back on track.

Germany's total COVID-19 cases and deaths are still far below comparable countries such as the United States, the United Kingdom and France, and the European Union overall. But Germany has fallen behind on testing and vaccinations, and more than 80% of the country's 75,000 deaths have come since the second wave began in the late fall.

That was when Merkel again bowed to pressure from state leaders to go softer on pandemic restrictions. Within weeks, the resulting "lockdown light" was roundly deemed a failure and a somewhat harder lockdown began.

Leader of Germany, ruler of little

Despite nearly 16 years in office and steady popularity among voters, Merkel's powers are limited. Germany's federal system transfers considerable authority to the states, including over key areas like health and rule enforcement.

The division of power is enshrined in the Basic Law, Germany's constitution, as a way to promote regional differences, check centralized power and level the playing field between richer and poorer states.

In the pandemic's early days, Germany's federalism was credited with giving local and state authorities flexibility in how they responded to outbreaks in their areas. Yet it has also been cause for confusion and lack of coordination against a virus that does not recognize state borders.

"The participation of many decision-makers generally doesn't get praised for protecting political freedom, but criticized as an efficiency problem," Nathalie Behnke, a public policy professor at Technical University Darmstadt, wrote last year for Germany's Federal Agency for Civic Education.

Merkel told Anne Will her patience with state leaders is wearing thin, and signaled her readiness to override them if they failed to act "in the very near future."

"I have a duty and an obligation to see how we can take action at the national level," she said. "One possibility is taking another look at the infection protection law and amend it."

The infection protection law grants the federal government additional powers during a national health emergency. Germany's parliament, the Bundestag, has amended it a few times since the beginning of the pandemic. Critics fear it hands the government too much power and requires increased legislative oversight, although the option is constitutional.

Changing the law to put more power in the hands of the federal government would require signoff from the Bundestag as well as the Bundesrat, the upper house of parliament that represents the states. Merkel said she has not yet decided if she will push for the change.

"We are legally responsible to curb infections, and that's not happening right now," she said, rejecting an offer to hold another meeting with state leaders. "We don't need a meeting. We need the states to take action."

Opinion: The German government is in free fall

Angela Merkel's government has announced a U-turn and said that there will be no Easter shutdown after all, just two days after announcing one. DW's Jens Thurau warns that the chancellor has lost her way.