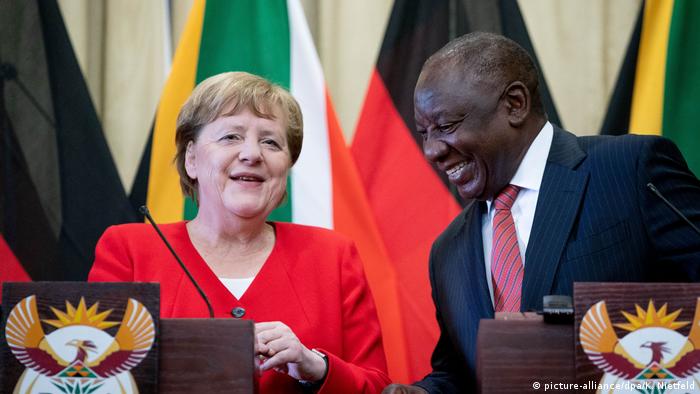 Thursday’s talks focused on how South Africa, a country largely dependent on coal, can transition to renewable energy. Ramaphosa said South Africa hopes to learn from Germany’s experience in dealing with climate change.

"We had really extensive and very informative discussions on energy, and the chancellor was able to share the German experience of how they have been able to move away from coal power stations and getting to renewables," Ramaphosa said.

Coal-fired power plants are responsible for generating 89% of South Africa's electricity. Germany, on the other hand, plans to scrap coal-fired stations by 2038.

"We have also touched on barriers related to how one can combine the traditional generation of energy with renewables, and I think we are very much in agreement,'' Merkel said.

Read more:Why few visas are issued for Africans wanting to come to Germany

The two-day visit began with a focus on improving business relations between the two countries as well as cooperation at the United Nations Security Council, where both Germany and South Africa are serving two-year terms as non-permanent members.

South Africa is a lucrative market for the German economy. But "the general conditions for the commitment of German companies are not optimal," Matthias Boddenberg from the Southern African-German Chamber of Commerce and Industry told DW ahead of Merkel's trip.

Some 600 German businesses already have operations in South Africa. However, recurring power outages across the country have put off a number of foreign investors.

Ramaphosa and Merkel also discussed the ongoing conflict in oil-rich Libya, with Merkel calling for collaboration in handling the crisis without "imposing a solution on them.“

"It is unfortunately not only an African problem but all the way from Russia to Arab states, Turkey and also from European states. We have seen many who apparently have a vested interest in Libya,'' Merkel said. "The Libyans themselves have to find a solution for their country."

Meanwhile, Ramaphosa said he "would like to see Africa taking the lead in all this," but he acknowledged that "the Libyan problem is a unique one because we have a number of other countries outside of Africa involved in that conflict."

Ramaphosa said nevertheless he expects a "much clearer African position" on Libya to follow the African Union summit that is scheduled to take place in the Ethiopian capital of Addis Ababa on Sunday.

Eight female founders from Ghana, Kenya and South Africa are currently in Berlin as part of the Female Tech Business in Africa program. They want to network and push for digitization throughout Africa. (22.08.2019)

The influence of the German constitution in Africa

On May 23, 1949, Germany's Basic Law was adopted and became a symbol of a new beginning. Some five decades later, German constitutional experts helped with the formulation of South Africa's postapartheid constitution. (23.05.2019)