The German chancellor has said she is open to a "short extension" to the Brexit deadline on certain conditions. She told the German parliament that the EU is committed to close cooperation with the UK in the future. 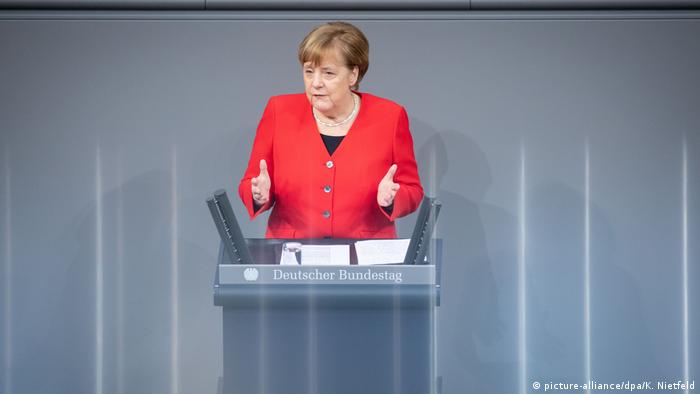 German Chancellor Angela Merkel on Thursday echoed European Council President Donald Tusk's stance on the UK's exit from the EU by saying a "short extension" to the March 29 deadline could be granted if there was a "positive vote" in the British Parliament.

Speaking before the German Parliament on Thursday morning, Merkel said she was convinced that the modifications to the Irish backstop — a key stumbling block in the Brexit negotiations — hammered out in Strasbourg last week are "sufficient" on the part of the EU to allow British Prime Minister Theresa May to move forward.

She added that if there was no "positive" vote in the UK, another dedicated EU summit could take place.

Merkel said the extension would be "discussed intensively" in Brussels over the next two days. "I continue to be convinced that we need an orderly exit," Merkel told a largely respectful chamber, save for some demonstrative groaning from the bank ranks of the far-right Alternative for Germany (AfD).

Merkel: UK not isolated after Brexit

Merkel, like many of the other German parliamentarians, stressed that the UK would "always be included in our thinking" whether inside or outside the EU. "The door to closer cooperation is wide open," the chancellor said.

Merkel's speech also included an impassioned appeal to the EU's powers of compromise, pointing out that it is worth "fighting for this Europe." "We are seeing multilateralism being put under increasing pressure," she told an applauding chamber. "Our work will continue to be founded on multilateralism."

That theme was taken up by members of her coalition partners, the center-left Social Democrats, whose parliamentary leader Andrea Nahles offered the British prime minister some advice: "One can't call this anything but an acute failure of British politics. Mrs. May, take a step towards the opposition," she said, before adding that if parliament can't agree on a withdrawal agreement, the only viable option would be a second referendum. 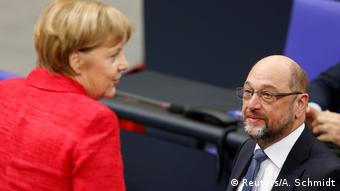 The AfD, meanwhile, reminded everyone that Brexit had been the result of a democratic vote, and said that, despite the confusion, Britain should be "respected" for confronting a basic question. "It wasn't the false information of the Brexit supporters that led to this situation," Party leader Alexander Gauland said. "It was the two souls in the chest of every Englishman that led to this dilemma."

Gauland reveled in the chance to repeat a war-time Winston Churchill quote that has become a Brexiter-favorite: "If Britain must choose between Europe and the open sea, she must always choose the open sea." (Churchill went on to become one of the strongest proponents of the nascent European Union.)

But Gauland accused the EU of punishing Britain, arguing that it shouldn't be difficult to simply allow the UK to leave the backstop unilaterally: a red line for Brussels because of the chaos that this would possibly unleash at the border between the Republic of Ireland and Northern Ireland. The Left party's Sahra Wagenknecht said Brexit and far-right populism are the symptoms of Europe's sickness, not the cause

Future of Europe and the world

But such direct comments on the chaos in Britain were relatively sporadic: most of the parliamentarians referred to Brexit mainly as a symptom of a wider crisis in Europe, or as an opportunity to attack perceived failures by Merkel to keep Europe together.

The socialist Left party's Sahra Wagenknecht said that Brexit, like the gilets jaunes protests in France, had been provoked by the EU undermining its own founding values. "Freedom has become just the freedom of the market and the big companies, instead of equality we have the justification of growing inequality," she said. "And solidarity has become the political legitimization of egotism, disregard for others, and greed."

"The EU is not sick because more and more people are voting for anti-European parties," she added. "The anti-Europeans are being voted for because the EU is sick."

The SPD's Martin Schulz, a former president of the European Parliament, warned against what he called the "renationalization" of world politics. Without a strong Europe, he said, the world's decisions would not be made by the G20, or the G7, but "the G2": China and the US.

To prevent this, "we must bring Europe together, so that its value-based economy ... can be established against the expansionist state capitalism of China on the one hand, and the brutal egocentric course of the US on the other," he said. He went on to condemn Merkel for failing to respond adequately to French President Emmanuel Macron's calls for stronger EU institutions.

The Bundestag debate happened ahead of Thursday's European Council meeting that will see May try to convince EU members to grant an extension to Brexit until the end of June.

Earlier, Tusk said a short delay would be an option, but only if the UK Parliament approves May's divorce deal with the bloc before the scheduled March 29 departure date.

The German chancellor urged lawmakers that "Europe means the freedom to say, write about and believe in what you think is right," within the bloc's legal framework.

Brits in Germany during Brexit

Theresa May has asked the European Union for a short extension of the Brexit deadline. But it's unclear whether EU officials will accept a deadline after European parliamentary elections in May. (20.03.2019)