Theresa May has asked the European Union for a short extension of the Brexit deadline. But it's unclear whether EU officials will accept a deadline after European parliamentary elections in May. 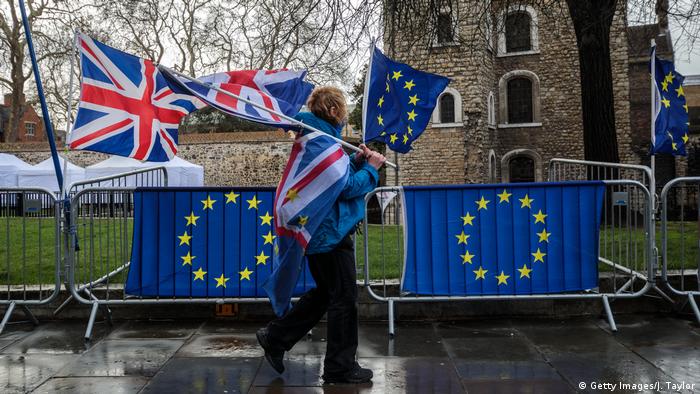 In a letter to European Union leaders, the United Kingdom has requested delaying Brexit until June 30, Prime Minister Theresa May said on Wednesday.

"As prime minister I am not prepared to delay Brexit any further than the 30th of June," May told MPs in Parliament.

"I have therefore this morning written to President Tusk, the president of the European Council, informing him that the UK seeks an extension to the article 50 period until the 30th June," she said.

In the letter she says that she intends to hold a third vote on the twice-rejected Brexit deal, but will need more time to do so after the speaker of the house invoked a centuries-old rule disallowing multiple parliamentary votes on the same matter.

"If the motion is passed, I am confident that Parliament will proceed to ratify the deal constructively. But this will clearly not be completed before 29 March 2019," she wrote.

May also said she would ask Parliament to vote once again on her withdrawal deal, but did not say when the vote would take place. British MPs have twice rejected May's painstakingly negotiated agreement with Brussels.

Britain is still scheduled to leave the bloc on March 29 — almost three years after UK citizens voted for the withdrawal in a referendum.

In the leadup to a crucial leaders' summit in Brussels, EU officials have voiced frustration over the political deadlock in Britain and concern that a delay would make Brexit coincide with European parliamentary elections in May.

The European Commission believes delaying Brexit until June 30 would entail "serious legal and political risks," according to an internal briefing for EU leaders.

"Any extension offered to the United Kingdom should either last until 23 May 2019 or should be significantly longer and require European elections," the document said. "This is the only way of protecting the functioning of the EU institutions and their ability to take decisions."

European Commission President Jean-Claude Juncker told Germany's Deutschlandfunk public radio on Wednesday that the leaders' meeting was unlikely to end with an agreement about postponing Brexit, which would require unanimous backing by EU leaders.

"We will probably have to meet again next week because Mrs. May doesn't have agreement to anything, either in her Cabinet or in Parliament," he said. "She must bring approval of the negotiated deal and she must bring clear ideas on timing."

No-deal Brexit 'in no one's interest'

Juncker added that the bloc had already done much to accommodate Britain over its planned split from the bloc and could go no further.

"There will be no renegotiations, no new negotiations, no additional guarantees in addition to those already given," Juncker said. "We have intensively moved towards Britain, there can be no more."

A third vote on May's existing deal is by no means impossible but has been made far trickier after Britain's parliamentary speaker threatened to block another vote on the same pact.

Another solution could be using a delay to convince Parliament to approve a different deal. Other alternatives include Britain crashing out of the EU without a deal — which would disrupt business across the bloc — or even a second Brexit referendum down the track.

German Chancellor Angela Merkel welcomed the fact that Britain had made a "clear request" about how to proceed, her spokesman Steffen Seibert said.

Seibert told reporters in Berlin that the request "will certainly be discussed intensively" at the summit, adding that Germany remains convinced that a no-deal Brexit "would be in no one's interest."

Before May's announcement, Andrea Leadsom, parliamentary leader and one of May's senior ministers, had said a short delay was the best option, adding that it was "absolutely essential we are out of the EU" before the European parliamentary elections.

"It would be extraordinary for the people who voted to leave the EU to find us fielding candidates for these next elections," she told British radio broadcaster LBC.

But Labour lawmakers say a short postponement would essentially allow May to force them to pick between her deal or a no-deal Brexit.

The European Union presented a unified front after UK lawmakers snubbed concessions and voted down a Brexit deal. Bloc leaders said the UK must justify itself if it wants an extension. (13.03.2019)