The new center will look at the political, ethnic and religious grounds for forced migration, with a focus on the displacement of Germans during and after World War II.

Merkel spoke via video to those gathered at the freshly restored Deutschlandhaus, built at Berlin's Anhalter Bahnhof train station in 1935. 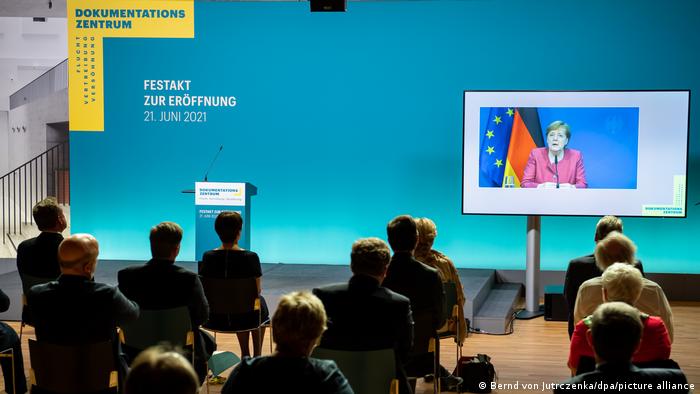 Merkel spoke via video link at the opening ceremony

"This center was discussed at length and intensively, in Germany but also with our partners in Europe. The discussions about this place really were not always easy, but they were important," Merkel said, while also welcoming the Polish, Czech and Hungarian ambassadors.

In those countries in particular, there were concerns that the fates of expelled Germans could deflect attention from guilt for Nazi atrocities.

The new institution "fills a gap in our coming to terms with history," Merkel said. "It is crucial to look at the story of displaced Germans, not as some isolated phenomenon, but rather embedded in the cause and effect of historical context."

The center's exhibitions will "illuminate politically, ethnically and religiously motivated forced migrations, primarily in 20th-century Europe but also beyond."

The center will provide a larger historical context by exploring "forced migration as a phenomenon of modern Europe."

These include displacements during World War I, the arrival of Vietnamese "boat people" in West Germany in the 1970s, the fallout from the implosion of Yugoslavia in 1990s and the European migration crises of recent years.

Its permanent collection is focused on the "displacement and expulsion of millions of Germans during and after World War II, which was initiated by Germany" but it also boasts space for temporary exhibitions as well as a library, archive and workshop facilities.

"The Documentation Center is about the flight and expulsion of Germans but also about the many other people," historian and director Gundula Bavendamm said.

She said getting the center up and running was "an impossible balancing act," with the main issue revolving around one key question: "How can the exodus and expulsion of Germans at the end of and after World War II be portrayed without raising the slightest doubt that this country is aware of its lasting responsibility for the German crimes of World War II and the murder of European Jews?''

"Without the Nazi policies of expulsion and annihilation, 14 million Germans wouldn't have lost their homes as a result of flight and expulsion,'' she said. "But that doesn't change the fact that their expulsion by the Allies and the eastern and central European states in the aftermath of World War II was also an injustice.''

Czech Republic: Opening up to History