Angela Merkel on Russian hacking reports: ′Honestly, it pains me′ | Germany | News and in-depth reporting from Berlin and beyond | DW | 13.05.2020 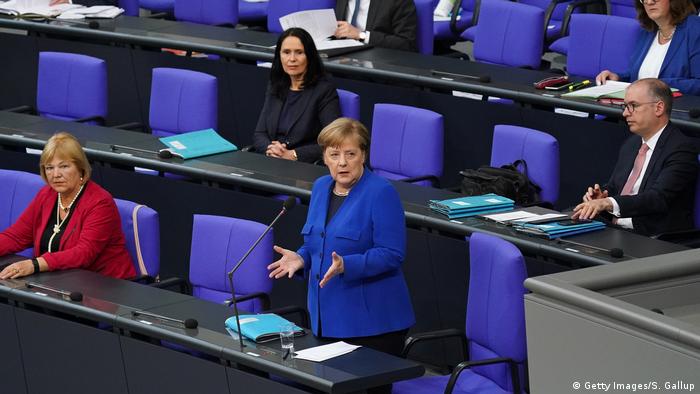 Angela Merkel was unusually critical of Russia in Germany's parliament on Tuesday when asked about the latest developments in a hacking case dating back to 2015.

German prosecutors have formally named a suspect with known ties to the "Fancy Bear" hacker group that has worked with Russian intelligence services and also established that Merkel's own local constituency office data was compromised. The chancellor subsequently said such efforts damage her diplomatic overtures to the Kremlin.

"I can honestly say, it pains me," Merkel told the Bundestag. "On the one hand, I strive daily for a better relationship with Russia, but then on the other we see that there is solid evidence showing that Russian forces are also involved in such activities. This really does add tension to our work towards and our desire for better relations with Russia. It's also an issue I can't quite dismiss internally, I find it quite uncomfortable."

Merkel said she did not have concrete information on what might have been taken or for what purpose but had the impression that material had been swiped "relatively haphazardly, based on what they could get."

The chancellor said she was taking the report published in magazine Der Spiegel on Friday "very seriously" and believed that it had been "thoroughly researched." She also said she was "very happy" that German's federal prosecution office had named a suspect in the case. Known hacker Dmitriy Badin was already subject to an FBI manhunt and is tied to the "Fancy Bear" or ATP28 operation, which is probably best known for its hack of Democratic Party servers in the runup to the 2016 election in the US.

President Vladimir Putin's spokesman Dmitry Peskov responded with incredulity last week when asked about the case, saying "I don't know who Germany is issuing the warrant for, I don't know about which hackers is this about, and why is this hacker supposed to be tied to the [Russian intelligence agency] GRU."

A day later, the Russian Embassy in Berlin said it had received no inquiry from the German government about Badin and had no information about him.

'We must be aware of this'

Merkel, who speaks Russian well and often leads NATO and European efforts at rapprochement with Vladimir Putin, said it was only the latest piece of evidence for a Russian "strategy" of hybrid warfare.

"Sadly, my conclusions aren't that new, because this is just one facet of many. There is a Russian strategy — we must be aware of this and we cannot simply wish it away — of hybrid warfare, also involving such cyber disorientation and the twisting of the facts," Merkel said. "It is not a coincidence, it is absolutely a strategy they're pursuing. Nevertheless, I will continue to strive for a good relationship with Russia, because I believe there are very good reasons to pursue such diplomatic efforts. But this doesn't make it any easier. "

One MP picked up on Merkel's use of the word "uncomfortable" in a follow-up question, positing that this word did not go far enough and that others might find it "outrageous, and rather more than uncomfortable."

It is not the first time that an alleged attempt to hack Chancellor Merkel's communications has made the headlines. The more famous example involved the United States' National Security Agency in 2013. Those allegations coming to light as part of the information revealed via whistleblower Edward Snowden, who ultimately sought asylum in Russia.

German Chancellor Angela Merkel and other senior politicians were reportedly hit by a data hack, with some of their letters, contact details and party memos leaked on Twitter. (04.01.2019)