Angela Merkel eyes free trade on trip to Latin America | Germany | News and in-depth reporting from Berlin and beyond | DW | 08.06.2017

Argentina and Mexico are important trading partners for Germany - all the more so as Chancellor Angela Merkel heads to Latin America in search of allies against US President Donald Trump's protectionist leanings. If the squeaky wheels gets the grease, Latin America makes no noise. The region causes few problems and maintains good relations with the West, yet there is little incentive to invest there. Even the United States mostly overlooks its own backyard, leaving it wide open for actors like China to use its considerable economic power to win influence there.

Germany and the EU are somewhere in between. "Germany's foreign policy has been very crisis-driven in the last several years," said Günther Maihold of the German Institute for International and Security Affairs (SWP). "Crisis that Latin America has nothing to do with."

That may be changing now that the US has thrown fundamental principles of global politics into question. Under President Donald Trump's leadership, the trans-Atlantic partnership may be growing apart. 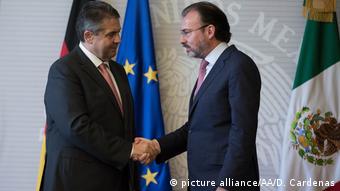 As a result, Chancellor Angela Merkel's visit this week to Argentina and Mexico is more than a symbolic gesture of outreach by the current head of the G20. Germany is looking for support for its worldview.

"Merkel has become a somewhat unwilling defender of free trade," said Detlef Nolte from the German Institute of Global and Area Studies (GIGA) in Hamburg. Her mission may be to shore up solidarity among trading partners, something that has until now more often been a plus than a must.

From the Foreign Ministry's point of view, a clear declaration of Germany's Latin America policy can be expected, said Maihold. Germany's current position stems from the late Guido Westerwelle, who while serving as foreign minister from 2009 to 2013, called Argentina, Mexico and Brazil "policy shapers," capable of helping tackle global issues like free trade and climate change.

Hesitation on both sides

That was before the financial crisis. Argentina fell into recession. So did Brazil, which underwent a political crisis soon after. There has been little interest in free trade as a result. Trade negotiations between the EU and Mercosur - an economic and political bloc of Latin American countries - have made little progress since they began in 1999, and not only because of Latin America. 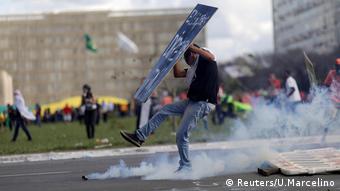 Brazil is in the midst of a political crisis

"The Mercosur states want to send agricultural products in particular to Europe, but that hasn't seemed doable on the EU side," Nolte said.

Relative to the region's other major economies, Mexico has long been part of global trade. However, it continues to be held back by domestic issues, such as organized crime, corruption and migration. Now, it has the added dilemma of its relationship to the US.

Eighty percent of Mexico's exports go to the US, despite free trade agreements with many Latin American and Asian countries. A framework agreement with the EU dating to 1997 is currently being updated. It is expected to be finished by the end of this year, said Ildefonso Guajardo, Mexico's Economy Secretary, following a meeting with EU trade commissioner, Cecilia Malmstrom.

Mexico would need additional markets should President Trump make good on his isolationist promises. China has been making strong overtures, where labor costs can be higher than in Mexico, Nolte said. 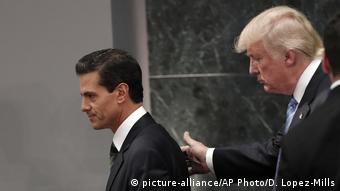 US-Mexico relations under Trump have been tense

Merkel urgently needs to solidify Germany and the EU's position in the region, said Maihold. "For years, Mexico's expectations of Germany have gone unfulfilled - scientific and technical cooperation, in particular," he said. One step towards this could be the Dual Year that the two countries are now concluding, inaugurated in Berlin in 2016 by Mexico President Enrique Pena Nieto with a focus on economy, tourism, education, science and culture. Merkel's trip marks the end of the Dual Year.

Germany faces stiffer economic competition in Argentina, where Russia, India and China have already won influence with infrastructure projects, among other economic incentives.

Merkel will be seeking a free-trade alliance as a bulwark against Trump's protectionism. Perhaps now more than ever, said SWP's Maihold, Germany needs both as global partners, regardless if they have filled the policy shaping role that Guido Westerwelle envisioned years ago.