Germany finds new coronavirus generosity ahead of EU summit | Germany | News and in-depth reporting from Berlin and beyond | DW | 16.07.2020

In the past, Germany helped impose a tough austerity program throughout Europe. Now Angela Merkel's government has come out in favor of debt-financed donations to EU partners. What has sparked this new generosity? 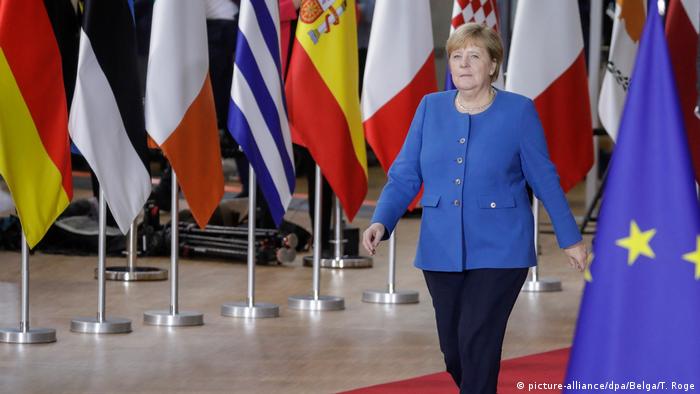 Caricatures of Angela Merkel in Nazi uniform appeared in Greek newspapers 10 years ago. At the height of the financial crisis, the Germans were seen as taskmasters, mercilessly teaching the indebted states of southern Europe budgetary discipline.

For thrifty northerners, on the other hand, Germany was the anchor of stability saving Europe from endless debt. 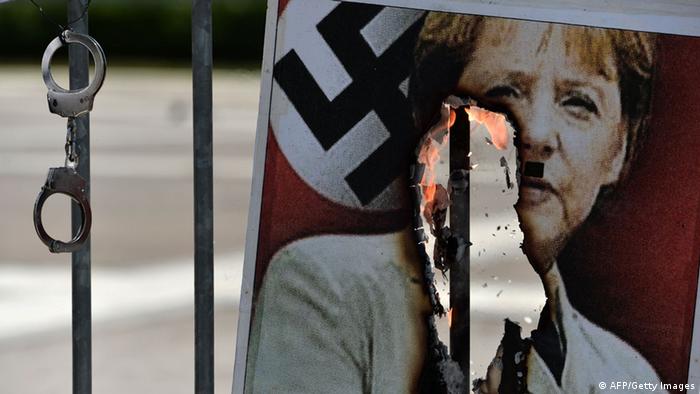 Today, it seems the same frugal German chancellor can hardly show enough generosity to pay for the coronavirus recovery fund. The aid package must be "massive," Merkel said on Tuesday after a meeting with Italian Prime Minister Giuseppe Conte, whose country would probably be the biggest beneficiary of the aid.

German Finance Minister Olaf Scholz, with one eye on the health of the financial markets, wants Europe to send "strong signals" to counter the economic consequences of the pandemic.

At this weekend's EU summit, the first since March at which government leaders will be present in person, the issue at stake is a huge aid fund of €750 billion ($850 billion). According to a proposal by the EU Commission, €500 billion of this is to go as non-repayable subsidies to the countries particularly affected by the coronavirus, the rest as loans. €500 billion as a debt-financed cash gift is an idea that Merkel, of all people, developed together with French President Emmanuel Macron in May.

The virus has changed everything

So why the change of heart? "Because of the exceptional nature of this crisis, we are also choosing an exceptional path," is how the chancellor explained the new generosity.

"The coronavirus is hitting all the countries in Europe, and some particularly hard," Andreas Jung, finance policy spokesman for Merkel's Christian Democratic Union (CDU) told DW. "There is a need for support among partners in an emergency situation. But that is also in our own interest: A strong Germany and a strong Europe go together."

For Merkel's stability-oriented CDU, this was initially a tough nut to crack. The party's parliamentary leader Ralph Brinkhaus admitted this in May, when Merkel presented the German-French proposal: "The whole thing is already a leap for our group."

But even Christian Lindner, head of the pro-business Free Democratic Party (FDP) is not categorically against the fund today. During the financial crisis his party was the CDU's coalition partner and, even more so than the CDU, stepped on the brakes when it came to getting into debt and spending money. However, Lindner considers it important "that aid is linked to conditions, i.e. reform plans."

Only the far-right is opposed

The only party which strictly opposes the plan is the far-right Alternative for Germany (AfD). Its parliamentary leader Alice Weidel sees it as a "breach of the dam," that would leave German taxpayers with "enormous burdens." She has no time for talk of European solidarity: "In this situation, we do not have billions to give away, because we have to help ourselves," she told the Bundestag.

With this notable exception, the critical voices have now largely fallen silent. The Bavarian State Premier Markus Söder, whom half of Germans would like to see as the next conservative chancellor candidate, has already backed the plans. He said that the states in the EU should no longer be divided into debtors and creditors, but that everyone should be seen more as partners. 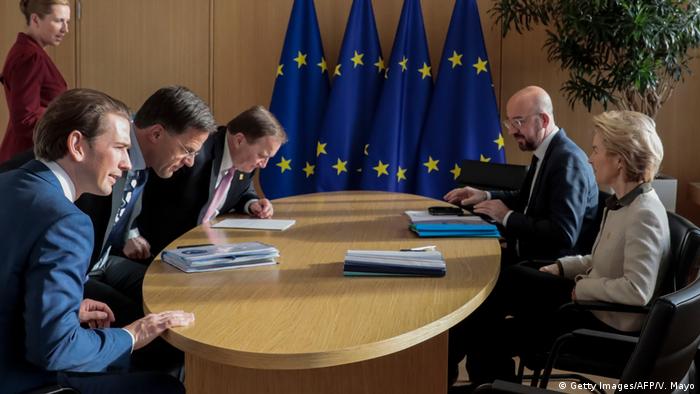 The heads of Austria, The Netherlands, Sweden and Denmark explained their position to EU commission leader Ursula von der Leyen

The fact that the old Germany is now prepared to distribute €500 billion in grants to distressed EU partners has surprised many.But Merkel is insisting on exactly this, despite the resistance of the so-called "frugal four," the Netherlands, Austria, Sweden and Denmark, because, among other things, loans would drive up Italy's debt ratio even further and thus strangle their economies.

Dutch Prime Minister Mark Rutte no longer understands the German thinking. He and the other "thrifty four" leaders fear false incentives and waste. But Andreas Jung of the CDU insists: "Without subsidies, it will not work. For already highly indebted states, the exclusive offer of loans means stones instead of bread."

Conditions as a compromise?

There are signs that Germany's new reputation as the benevolent donor has rattled some in the CDU. A day before the summit, parliamentary leader Ralph Brinkhaus demanded in a newspaper interview that the money must absolutely be tied to reforms in the states as a condition.

This earmarking is one of the possible compromises that might be hashed out at the summit, which could appease the "thrifty four." Various politicians have named areas that could be specifically incentivized by the grants, such as climate protection and digitalization. It would also be possible to reduce the sum of €500 billion in subsidies, or change the mix of loans and subsidies.

But this doesn't change Merkel's new generosity. Earlier this month, when she spoke of the incipient German Presidency of the Council of the European Union to the European Parliament, she said: "What message could be more fitting than this - that Europe is capable of great things if we stand by each other and stick together."

Asked what is at stake, Andreas Jung answers: "Europe: The idea, the values, the economy."

Lawmakers in France and Germany are pushing for the rest of the bloc to adopt their €500 billion rescue fund. However, skeptics have raised questions about how debt will be shared. (19.05.2020)

The EU's health commissioner says people aged over 60 — and other vulnerable individuals — should have a second COVID-19 booster. New mutations of the virus have recently led to increased infections.

German Health Minister Karl Lauterbach has said everyone should consider a second booster shot as the number of coronavirus infections and people in intensive care increases.