Despite the discomfort, rectal COVID-19 probes do have some benefits over mouth and nose swabs. But DW spoke to a researcher who says the case still isn't clear for their use as a mass diagnostic tool.

DW spoke with Wendy Szymczak, who researched the utility of stool PCR for detecting SARS-CoV-2 RNA and implemented diagnostic testing for COVID-19 at the Montefiore Medical Center in New York.

DW: What can a stool PCR test do differently than one of those oral or nasal swabs that most of us are familiar with?

Wendy Szymczak: The main advantage of a stool PCR is that you can detect the SARS-CoV-2 RNA for a longer period of time, post-symptom onset. So, for the traditional nose and throat, or nasopharyngeal PCRs, you can detect virus usually for about two weeks if the patient has mild symptoms. Whereas in the stool, it's been shown that you can usually detect the virus for about four weeks, and for some patients even longer, out to 70 days. The biggest caveat, though, is that not all patients will shed viral RNA in the stool.

So there is some sense in testing this way if you're trying to figure out, over a longer time frame, whether or not someone still has the coronavirus in them. 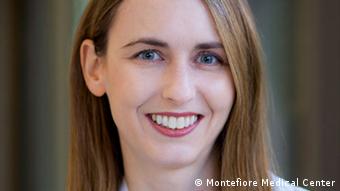 Dr. Wendy Szymczak is the director of the clinical microbiology lab at Montefiore Medical Center

Yes. It makes sense. It just depends on the purpose of why you're doing the test. For a patient where you're trying to make the diagnosis, if they're presenting to a medical center or urgent care center, it can be helpful because you have that extra timeframe to be able to pick up the infection. Now whether it's useful in an asymptomatic patient and for screening purposes, that's a little bit harder to say. And the reason is that we just don't know if those patients are only shedding virus in the stool — or if they are able to transmit the infection to others.

Why does the virus stay in the stool longer than in the throat?

I don't think we really know that. We do know that the virus can infect the cells within the gastro-intestinal tract, but we don't really know why you tend to shed [virus] longer in the stool versus the upper respiratory tract.

Yeah, I think these are normally done by a medical professional. The swab is put in about an inch, rotated, and pulled back out.