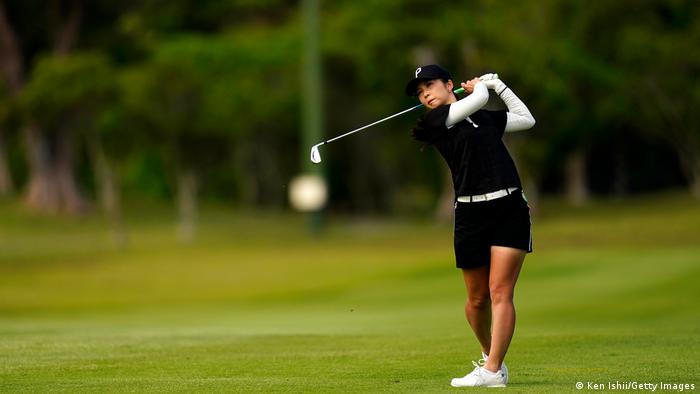 Erika Kikuchi hits her second shot on the 9th hole during the second round of the Daikin Orchid Ladies at the Ryukyu Golf Club in Nanjo, Okinawa

A symbol of wealth and social standing in Japan 40 years ago, golf suffered a deep downswing in its popularity after the nation's economic bubble burst in the early 1990s. With the advent of the coronavirus pandemic and a dramatic shift in the lifestyles of many Japanese, the sport is enjoying new-found popularity.

The Golf Digest Online course reservation site reported a record number of bookings in calendar 2020, up 12% on the previous year, while the organization for golf course operators announced that player numbers were up 10% in October compared to that of the same month one year earlier, which was before the pandemic struck.

Similarly, operators of golf driving ranges and companies selling golfing equipment and specialist clothing for the sport are all reporting increased sales.

The recent boom in the sport is "incredible," says Bennett Galloway, president and CEO of the Galloway Golf Group and a player in Japan for 30 years. And he says that while it may have been prompted by the pandemic, it may very well be sustained by changing social attitudes here. 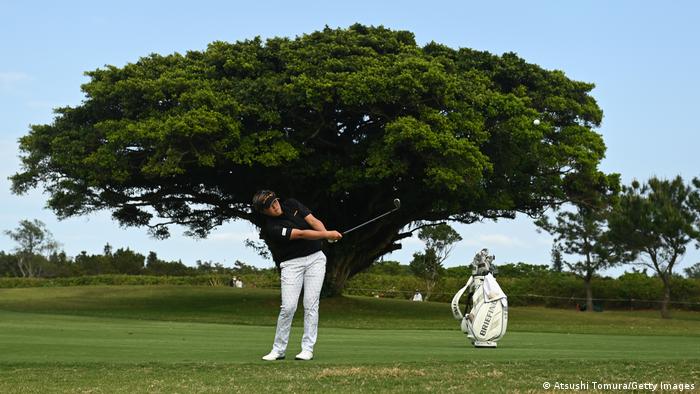 "Back in the bubble years of the 1980s, a lot of people did business on the golf course," Galloway told DW. "Companies would buy a membership to a course and these memberships would invariably go up in price, so it was a bit like playing the stock market.

"But the cost could be written off as a business expense and the membership would be used to entertain business partners and clients," he said.

"At the peak, some of these memberships were being sold for $2 million or more. It was a question of prestige, of belonging to an exclusive club and if you did not have a membership, then you would never be able to get a round on a weekend."

The burst of the economic bubble in the early 1990s put a sudden stop to much of that entertaining, with the value of memberships collapsing and a lot of golf clubs going out of business.

The sport has muddled along in recent years, with Japanese professional players having a degree of success on the international circuit. They are now hoping for a surge in interest as a result of the Tokyo Olympic Games, with the men's and women's tournaments scheduled to take place at the exclusive Kasumigaseki Country Club in Saitama Prefecture, north of Tokyo.

The games were put off from the summer of 2020 to this coming July, but the pandemic has already encouraged more people to take up the game.

"I was looking at the industry statistics and the number of people playing in August of 2020 was up 15% on the same month a year earlier, before the pandemic," said Galloway. "That's an incredible rate of growth and I would say that it is almost entirely due to the coronavirus."

Avoiding the 'Three Cs' and coronavirus

Unlike many sports, golf can meet the government's recommendations that people avoid the "Three Cs" of confined spaces, crowded places and close-contact settings, Galloway points out, while still providing exercise, social interaction and enjoyment.

And golf has also moved away from its elitist past, he believes, as companies encourage people to work from home, giving them more flexibility in their day-to-day work routines and the chance to take up new pastimes.

"I talk with these people and what I am hearing is that people want to get out more, to use their free time for themselves, to enjoy their hobbies and learn new ones," he said. "There is a very clear shift going on in Japanese society and the workplace here and people are realizing that they are able to do whatever they want to and when they want to."

And it is particularly exciting to see more young people taking up the sport, he said, with figures indicating that the number of 20- and 30-something players has soared by more than 40% in the last 12 months. Courses are even reporting entire families playing a round, something that would have been virtually unheard of in the 1980s.

Masa Yamada is a senior manager of a Tokyo-based hotel group and has been playing for about 25 years, and says he sees a big change in the sport here.

"I used to play with people I knew through business or work and, as a sport, it is a good way to keep in touch with those people," he told DW. "But now I prefer to play for myself.

"For me, golf is a good way to keep fit and it is also a social event that can also meet the regulations laid down for the pandemic," he said. "I'm seeing a lot more people on the course recently and I do think that many have realized that golf is an opportunity for them to get out of the house but still keep safe."

Galloway believes that corporate Japan has undergone a seismic shift in the last 12 months and that more companies will be encouraging their staff to work from home in order to save property, transportation and other costs.

"That potential really is there for the first time," he said. "But it does still depend on employees. If they find they are working from the suburbs, that courses are available to them on weekdays as well as weekends and if they are able to take time off to get a round in, then the sport should continue to bounce back. I'm optimistic it will."