Dozens of demonstrators were arbitrarily arrested and abused, according to an Amnesty International report. The anti-government protests broke out in November 2019 in response to a hike in petrol prices. 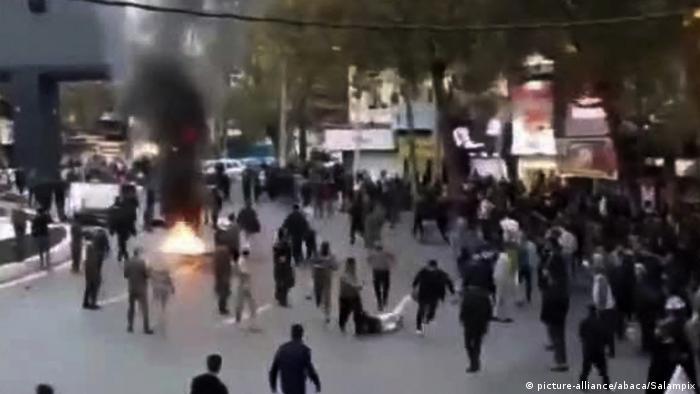 Iran's security forces were the perpetrators of serious human rights violations against demonstrators in the wake of anti-government protests in November 2019, according to a report by Amnesty International on Wednesday.

The UK-based non-governmental organization accused security forces of using torture to elicit confessions, adding that hundreds of civilians have subsequently been imprisoned since last year's protests against increased petrol prices that prompted a severe crackdown from the Iranian regime.

At the time, the nationwide demonstrations were quelled by security forces with widespread arrests as well as a near-total internet blackout.

Amnesty said it had collated dozens of accounts and that children as young as 10 were among those arrested.

Those arrested were tortured into "confessions" of involvement in the unrest, membership of opposition groups or contact with foreign powers, it added.

The human rights group said it had registered the names of more than 500 people "subjected to unfair criminal proceedings in connection with the protests."

"Hundreds have since been sentenced to prison terms and flogging and several to the death penalty following grossly unfair trials which were presided over by biased judges behind closed doors," Amnesty said.

Jail terms ranged from one month to 10 years, the report stated.

In May this year, Iran's interior minister suggested that up to 225 people died during the protests, when petrol pumps were set on fire, police stations attacked and stores looted.

A group of independent UN rights experts said in December 2019 that hundreds of people could have been killed, based on unconfirmed reports while Amnesty also suggested more than 300 citizens perished in the wake of the unrest.

Iran blamed the violence that broke out in the midst of the protests on "thugs" supported by the US, Israel and Saudi Arabia.

The World Cup has given Iranian women the chance to do what many take for granted — going to watch football matches. Activists are now pushing world football's governing body FIFA to end the ban issue once and for all.