Deutsche Telekom estimates that up to 80 percent of adult refugees in Germany own a smartphone. The devices were critical for their odyssey to get here, and they could be vital to help them stay. 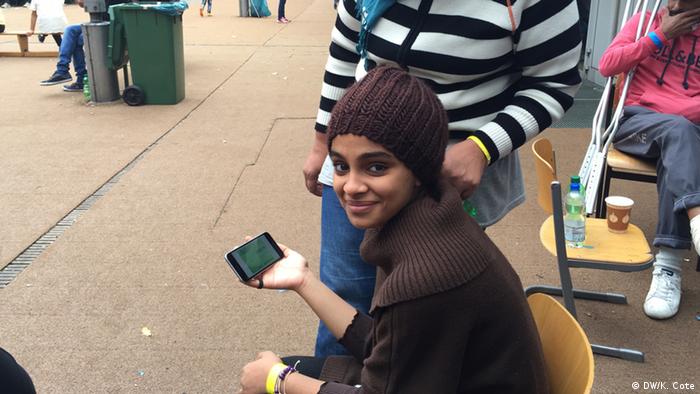 Information designers and IT companies are scrambling to develop online networks and multi-lingual portals to aid the tens of thousands of refugees who're arriving in Germany with little more than the smartphone in their pocket.

For refugees, smartphones are tools for survival," says Stefan Göllner, a communication designer, who specializes in urban issues. "They are crucial for making decisions on their journey to get here, and now they are indispensible for maintaining contact with their families back home, and in Europe."

But smartphone technology may also play a key role in getting the refugees officially registered as asylum seekers, and acquainted with life in Germany as well.

Göllner's company, Place/Making, has just developed an orientation website and app called InfoCompass (info-compas.eu). It contains information specially tailored for refugees in six different languages about getting around Berlin's Reinickendorf section, where thousands of refugees are already being housed in emergency accommodation.

Some 20,000 refugees have arrived in Berlin in the last weeks. An estimated 20,000 are expected over the next months, as the capital hosts its share of the 800,000 expected nationwide.

Friedrich Kiesinger, managing director of Albatros GmbH, sponsored the InfoCompass refugee site in Reinickendorf. Albatros operates emergency refugee centers in a number of places in Berlin, including in a giant indoor sports facility behind the Olympic Stadium.

Kiesinger says refugees have an enormous need for information, and to communicate. "The first thing they do after coming here and getting settled is head downtown to buy a phone card," he says. 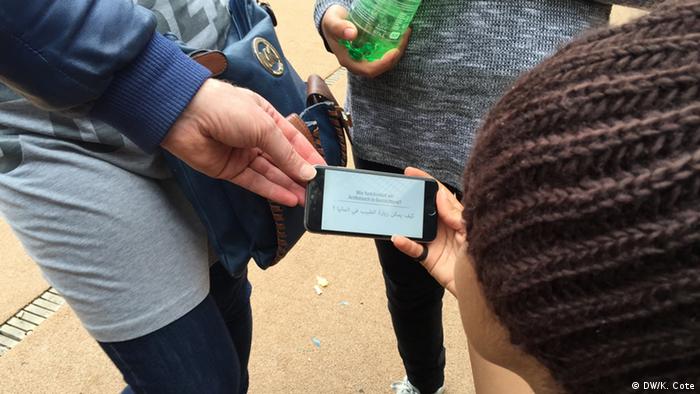 Learning to use the InfoCompass app may come in handy

Deutsche Telekom estimates that as many as 80 percent of all adult refugees arriving in Germany have a smartphone. Telekom announced an internal task force to examine ways of assisting with Europe's refugee crisis, shortly after images of the lifeless body of three-year old Aylan Kurdi washed ashore in Turkey, galvanizing public attention to the refugee crisis.

Since then, Telekom has provided five initial intake centers in Germany with Wi-Fi facilities in Nostorf-Horst, Trier, Deggendorf, Bramsche and Bremen. It's working fast to install them in another 25 centers over in the next few days.

"We are going to help where we can, but we are getting so many requests that we ask people to understand that we can't provide help everywhere all at once," says Christian Illek, Deutsche Telekom's chief human resources officer. Also, Telekom plans to go online with its own information platform for refugees by the end of the month.

Register before they get here

Europe's largest software company, SAP, is creating an app that would enable refugees to tell authorities that they are coming even before they get here. The app could become part of the official process for applying for asylum as well as the first step towards seeking a job. SAP has offered the technology to the Federal Government at no charge.

Most people say it is too early to tell whether smartphones and mobile apps will be as useful to refugees settling down in Germany as they were in them getting here in the first place.

But for the thousands and thousands of Germans who are anxious to pitch in, and the scores of official and grass-roots organizations who are struggling to organize the tsunami of volunteers, they have already proved a boon.

When the first wave of 450 refugees arrived on short notice at Mr. Kiesinger's sport halls behind the Olympic Stadium earlier this month, there was not enough water, baby food or diapers to go around. Local volunteer group Willkommen in Westend quickly created a dedicated Facebook page and notified its activists of the problem via email. By the time its leaders got to the sport halls, the first donations from members were being distributed.

Last night, the first special refugee train from Salzburg arrived at Cologne Airport, which is a new refugee hub for the German state of North Rhine-Westphalia. Daniel Heinrich was there when the train rolled in. (22.09.2015)

Jaafar, shu fi? You too are now Germany!

Ahlan wa-sahlan. Welcome to Germany! Your long journey has now come to an end. But now you have work to do - to ensure that you don’t remain foreign in this country. (22.09.2015)