Aid from around the world is streaming to the United States in the wake of Hurricane Katrina. George W. Bush has had his hands full in managing the clean-up but has also taken time to thank those who have helped. 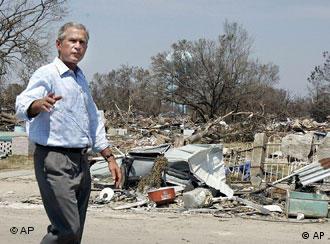 President Bush is thankful for aid from international community

The last week has been the most difficult in George W. Bush's presidency since the 9/11 terrorist attacks on the World Trade Center and the Pentagon. This time a natural disaster, Hurricane Katrina, has wreaked havoc on US soil, quite literally. Efforts to contain the situation have been disastrous, with thousands of citizens of New Orleans, mostly blacks, struggling to survive for a week in indescribable conditions while awaiting evacuation.

The international community is responding in offering humanitarian aid to a country that many would consider to be beyond the need.

Over the past weekend, Germany sent two planes loaded with 25 tons of food rations to a US Air Force base in Florida for further distribution to the Gulf Coast states of Louisiana, Mississippi and Alabama. Another flight carrying 15 tons is scheduled to be delivered on Tuesday. 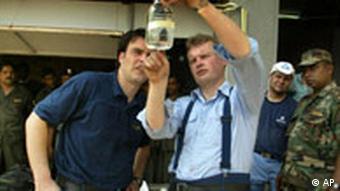 "We are so happy that the Germans are here. It's wonderful," said John Turner who's in charge of the American Disaster Prevention Association.

In a letter to German Chancellor Gerhard Schröder, President Bush wrote that millions of Americans were grateful for the assistance from Germany.

"It shows the generosity of the German people and government. It is a testimony to the human spirit as well as to the bonds between our nations," Bush wrote. 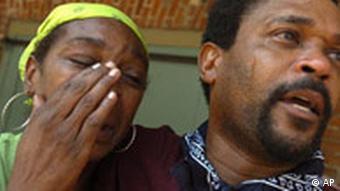 Frank-Walter Steinmeier, head of the Chancellor's Office, said this corresponded with items that Germany had offered.

In addition, a medical ship is in the Atlantic on its way to Egypt for an exercise but could be redirected anytime to the hurricane-stricken region.

EU, NATO and UN all responding

The EU is also responding generously to the United States' call for aid for the victims of Katrina. Britain alone plans to send 15 planes this week and might extend the operation -- with a sea shipment -- to provide blankets, tents and cooking equipment.

Other EU members, including the Baltic States Estonia, Latvia and Lithuania have rescue, security and victim identification units on standby. Greece has even placed two cruise ships at the disposal of the US government.

"The US has been enormously grateful for the outpouring of support, both emotional and concrete, from our allies over the past week," said the ambassador.

The United Nations is consulting with the White House about how they can help. During a visit to London, UN Secretary General Kofi Annan said the world now had a chance to repay the US for the help it has offered in the past.

"It has been a huge disaster. I don't think at the beginning one realized the extent of the damage and the disaster," he said in a BBC interview.

US Accepts German Help After Katrina

After initial hesitation, US officials on Sunday handed their German counterparts a "wish list" of emergency aid such as logistics experts, water purification plants and medical help for victims of hurricane Katrina. (Sept. 4, 2005)

Chancellor Gerhard Schröder announced he would help the United States deal with fuel disruptions and also offered emergency supplies and support to hurricane-struck regions in what has become a German campaign issue. (Sept. 2, 2005)

Meanwhile, the first Russian soldier to face trial for killing a civilian has asked the man's widow for "forgiveness." Ukrainian President Zelenskyy has warned of a long war.