Ai Weiwei: 'Refugee crisis is a political tool for populists'

In an interview with DW, China's dissident artist Ai Weiwei has said that some groups are trying to incite hatred against immigrants in Germany and Europe, and that the world needs to rethink the idea of humanity. 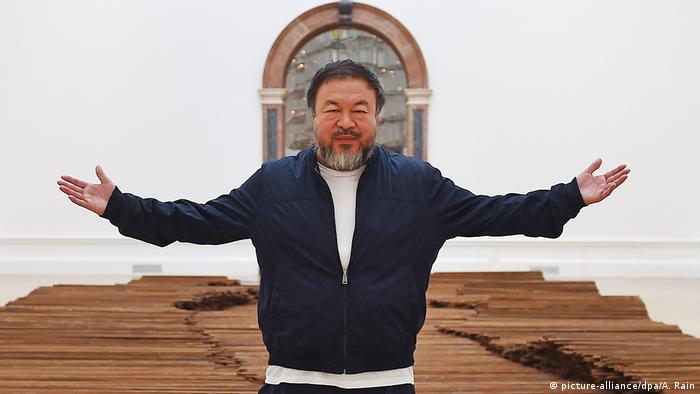 DW: In a recent interview with the media, you described the current mood in Germany and Europe as a reflection of the 1930s. Could you elaborate on trends and events that made you feel that civil society in Europe was becoming hostile?

Ai Weiwei: In 2015, Chinese authorities gave me back my passport and I was allowed to travel abroad. Almost immediately after, I went to the Greek island of Lesbos. I gradually became more involved with the refugee crisis. I visited refugee camps in Germany and in Greece. Our team also went to camps in France and in Italy. Altogether we traveled to over 20 nations and dozens of the largest refugee camps while filming Human Flow. My understanding of the refugee crisis developed from those experiences.

From the start of the project, I realized that Europe was refusing those who were most vulnerable and needed rescue. Different nations and political parties set up obstacles to frustrate and push refugees away. The number of global refugees has continued to grow since we made the film, now reaching almost 70 million, according to the UN.

As someone who came out of a so-called communist nation, I believed that Europe would protect its most valuable ideologies — respect for human rights, human dignity and freedom of speech. My research on the refugee condition led me to a very different, almost shocking conclusion. What I saw was Europe's developed nations — with their tremendous resources and capabilities — attempted to avoid bearing any responsibility.

With the deterioration of political ideology and growing economic difficulties, there is an effort to blame outsiders, to become more exclusive and fan hatred. The refugee crisis has become a political tool wielded by populists and right-wing movements all over the world, including in Europe.

We can only study the current situation with the lessons of the past. We can see how populism gradually led to the Nazi movement of the 1930s and 40s. We suffered not only a great loss of life, but also our fundamental trust in society and a belief in the goodness that humanity can provide. That loss takes much longer to restore than any economic depression.

What do you think governments in Europe, including the German government, should do in order to restore the respect for human rights in civil society?

It is essential and urgent for society to rethink what humanity is. We must strongly emphasize that humanity is one. We are living in an ever-shrinking global village. Physical borders cannot stop human struggle or state and business interests.

The West has profited from globalization more than anyone else. Without continuing to protect the essential values of human dignity and human rights, we could easily see society fall apart; political leaders and business leaders must be conscious and alert to the possibility that the establishment could be reduced to ground zero.

There have been some media reports about your plan to relocate to the US. Could you tell us why you decided to move and also about the years you spent in Germany?

I intend to establish a studio in an English speaking society. I spent over ten years living in the United States and am familiar with the culture in New York. That is why I am seeking a studio in the New York area. That is not to say I will give up my German studio, which will always function as my base in Europe.

I have many strong feelings about Germany. I like the country's rationality and it has strongly defended human rights and free speech. When I was living under soft detention in China, the German government and civil society steadfastly demanded my release. I was also given the opportunity to teach at the Universität der Künste in Berlin.

I spend most of my time in my studio conducting research and planning my exhibitions. I have little contact with German society, but I can still sense strong negative feelings toward foreigners. In some, there is the deep belief that those who come from elsewhere are not contributing to society; that they are not making society more colorful and lively both culturally and economically and are a burden instead.

Advocating for human rights through art has been a big part of your career. What inspiration did you find in Germany?

Recently, Germany announced that it would stop selling weapons to Saudi Arabia following the murder of the journalist Jamal Khashoggi. Germany made a clear gesture to cut itself off from an evil act carried out by a dark society. This is never an easy response.

England, France, and the United States view the journalist's murder as something that can be ignored, or as something separate from their business interests. It's so rare to see a political leader like Chancellor Angela Merkel stand out on the right side of history in defense of essential principles. Germany should value this because a horrible price was paid to learn this lesson.

As we head into 2019, are there any major projects planned for the upcoming year?

I will have a major exhibition in Düsseldorf next year at K20/K21 — the Kunstsammlung Nordrhein-Westfalen. It will be my largest exhibition in Europe. At the same time, I am producing several films on human rights, social justice and environmental concerns.