Germany is often criticized for sluggish levels of digital investment, particularly in AI. The government wants to invest €3 billion before 2025 to try and close the knowledge gap with world leaders in the field. 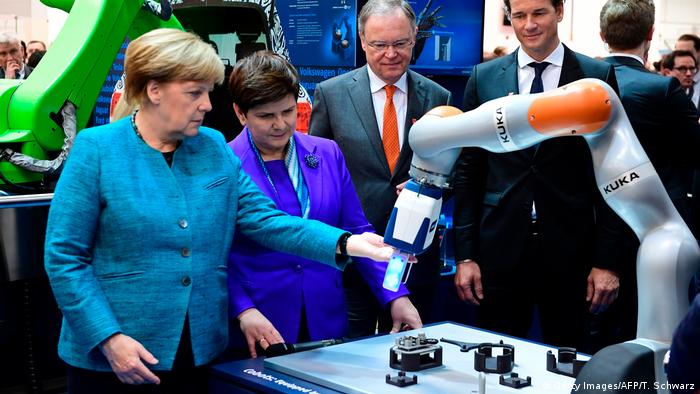 "Made in Germany" — as manufacturing seals of approval go, those three words are pretty valuable. Over the centuries, Germans have shown themselves to be quite adept at building things, from the diesel engine to the helicopter, the Bunsen burner to the microphone.

But how is that noted prowess holding up in the digital era, particularly in the increasingly prominent area of artificial intelligence (AI)? Many critics say not very well, with the United States, China, Israel, the United Kingdom, Canada, Japan and France all ahead of Germany in the "race for AI leadership," according to a 2018 study by online publishing platform, Medium.

According to another study, by the consulting firm McKinsey, if Germany is not quick enough in its implementation of AI across various industries, from medicine to transport, over the next decade, its current GDP target for 2030 may ultimately lag by up to one-third. In other words, German growth depends on how quickly it catches up on AI technology.

That helps to explain why the German cabinet will spend November 14 and 15 holed up in Potsdam, where the primary topic of consideration will be how Germany will become a global leader in AI.

AI is not new but in the last few years, its future importance has become more immediate, underlined by the volumes of investment being poured into research and development in China, the US and elsewhere.

Germany, perhaps belatedly, wants to get in on the act. A major reason for the Potsdam gathering is that the government will discuss how best to invest a fund of €3 billion ($3.4 billion) into AI research and development between now and 2025.

Back in April, German Chancellor Angela Merkel spoke of the need to compete with China on AI, and in an interview with online magazine t-online.de ahead of the Potsdam meeting, she emphasized that Germany is making significant progress in the area and plans on doing much more in the years ahead.

"We have excellence clusters in the field of artificial intelligence and here we will develop an overall strategy," she said. "There is a lot going on, but we need to accelerate our efforts once again."

In July, the German government released details of a strategy paper on artificial intelligence, due to be completed this month and presented at the 2018 Digital Summit in Nuremberg in December.

If the stated policy goals are to be believed, Germany has serious ambitions in the field. The government says it is committed to "achieving and maintaining leading global excellence in the research and development and the application of AI in Germany and Europe" and even says that "'Artificial Intelligence (AI) made in Germany' is to become a globally recognized quality mark."

A good start, but still not enough

But does the rhetoric match reality?

"It is a good start so I don't want to criticize it, but €3 billion is not very much," Michael Feindt, founder of Blue Yonder, a German company specializing in AI solutions for retailers, told DW. 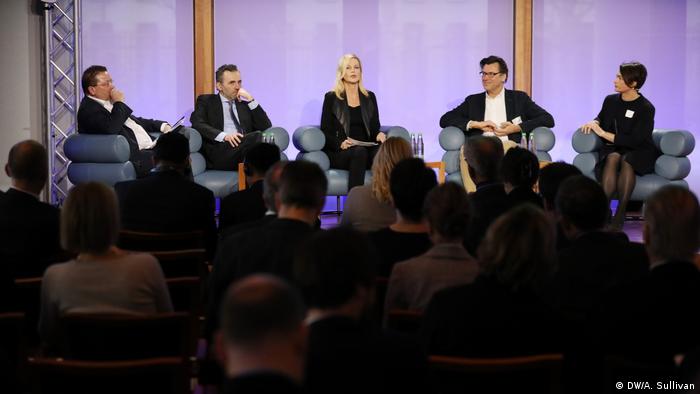 Michael Feindt (second from right) believes the €3 billion investment is a good start, but says more needs to be done

"Politicians are trying to find out what they have to do, what is good and what is not good and I think that is the right way to go, even if you may argue that it is a little late," said Feindt, who is also a professor at the Karlsruhe Institute of Technology (KIT).

"But this amount is much less than companies, such as Microsoft or Google, invest in AI in a single year. So people should not think that Germany will suddenly become a world leader in the field, able to compete with the US and China."

When it comes to pre-eminence in AI, the USA and China feature prominently in every discussion, and with good reason. According to Times Higher Education magazine, academic papers on AI development from China and the US far outweigh those from the rest of the world year after year.

The Chinese government has a wide-ranging national plan aimed at making the country the world leader in AI, with its plans including the building of a €2 billion AI research park in Beijing. The US has no one singular government policy for AI research, but strong academic programs from various US universities, as well as major private investment from business sectors, have made the country a powerhouse of AI innovation.

If Germany is arriving late to the party, it has cultural reasons for doing so, according to Feindt. He believes that a national obsession with privacy has made German citizens particularly wary of AI and its strong reliance on data. He also thinks Germany's manufacturing prowess means it is a country that tends to focus on hardware above software.

"If it is about data in Germany, then you have to explain it and show that it is not dangerous," he said.

Aljoscha Burchardt, a senior researcher from the German Research Center for Artificial Intelligence with a doctorate in computational linguistics, tends to agree on the German cultural resistance to AI and other forms of digital technology.

"While all political parties agree that we have to digitalize and that AI is a motor for progress, the population remains skeptical," he told DW. "That has to do with fears of job losses, fears about data protection. Maybe also with a generally skeptical attitude towards technology."

Moving with the times

Yet things do appear to be changing. The Potsdam meeting indicates some kind of momentum is building with the government's digitalization drive. Peter Altmaier, the Minister for Economic Affairs and Energy, said before the start of the two-day think-in that he believes the government commitment will be backed by that of private and business investors, hitherto sluggish in their willingness to invest in AI startups when compared to the world-leading nations.

It is also worth pointing out that while Germany is behind the leading nations when it comes to its AI sector, it is not exactly bottom of the league either.

In the Medium study, Germany ranked eighth in terms of global distribution of AI-focused startups. Then there are initiatives such as that between Amazon and Germany's Max Planck Society, whereby the US tech giant plans to build an AI research center next to the Max Planck Institute for Intelligence Systems in Tübingen, in the south of Germany.

"When I started, there was virtually nothing,” said Feindt, who founded his company in 2008. "But slowly, it is getting better."