For years, investment in digital infrastructure has been urged in Germany, with business leaders saying the country risks being left behind. But is Europe’s powerhouse really so unprepared for the digital revolution? 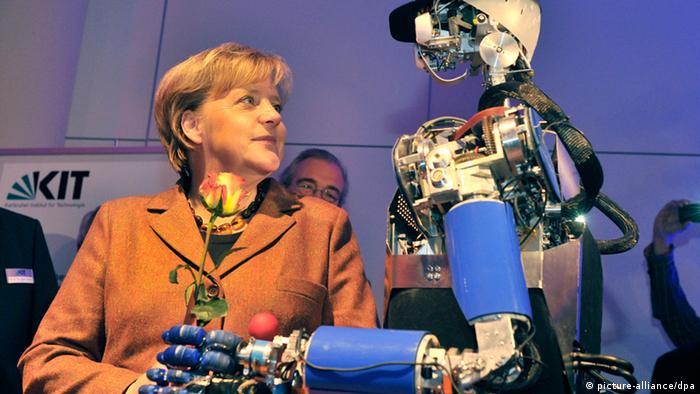 When news broke that Germany's main political parties had agreed another coalition deal, exhilaration was less than palpable in a country long used to such arrangements.

One particularly disenchanted constituency was German business leaders, many of whom warned that the latest deal will leave key sectors of the German economy unfit for the pressing digital and technological challenges of the future.

Such criticism is not new. While "digital infrastructure" refers to many things, generally it refers to fast internet. And in that area, Germany's performance has not been good enough.

According to the most recent Akamai 'state of the internet' report (2017), Germany ranks 25th in Europe in terms of average connection speed — pretty dismal stuff for the continent's economic superpower.

But are sluggish internet speeds really enough to say that Germany is on the brink of some kind of analog Armageddon? Has the lack of investment been such that an economic titan of Germany's stature could be scuttled on the rocks of technological change?

Few credible economic observers would argue the importance of world-beating bandwidth. Germany, perhaps beset by cautious attitudes towards investment, has not yet adequately updated much of its old telecommunications infrastructure. Too much copper remains where fiber-optic should be.

That will need to change to facilitate the next great leap forward: 5th generation mobile networks (5G). Apart from providing far faster internet, 5G is essential for the implementation of major new use cases, such as the much-vaunted Internet of Things (IoT).

Few sectors will be unaffected by the inevitable changes and innovations this technology will demand. Yet the German economy has a rare capacity for marching to its own beat.

Its automotive and mechanical engineering sectors are the envy of the world. When exports from these two sectors are added together for 2016, they equate to almost half the whopping $1.32 trillion (€1.07 trillion) worth of goods Germany exported that year. Their long-term success is intrinsic to German well-being.

They provide a good prism through which to regard the German economy's wider technological preparedness, beyond internet infrastructure alone.

Getting behind the wheel

When it comes to the car industry in 2018, innovation generally means two things: e-mobility and self-driving cars.

According to Eckehart Rotter of German car industry lobby group the VDA, the industry is making major progress in establishing wide-scale e-mobility in Germany, having pledged to invest around €40 billion in alternative powertrains between now and 2020. 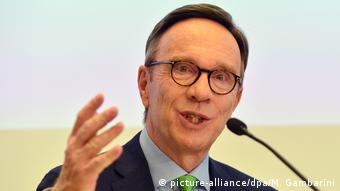 Matthias Wissmann, head of the VDA, says Germany's car industry is ready for the future

The industry has also pledged investment of €18 billion in digitalization between now and 2021.

VDA head Matthias Wissmann recently spoke of the industry's advances in self-driving as well. "The German automotive industry is already the world champion when it comes to patents for connected and automated driving," he said, pointing to the fact that German companies hold 52 percent of relevant patents issued for the sector since 2010.

So the industry itself says it is ready to meet the technological revolution that is coming, although Mr Rotter does emphasize the need for the German government to invest in 5G and in "very advanced digitalization infrastructure," particularly to cater for autonomous driving.

That's the industry take on things. But critics say German carmakers were too slow to follow the lead shown by US tech leaders such as Tesla, Elon Musk's all-electric carmaker, and as a result now lag behind in several areas of innovation.

Yet the charge that the German industry is still asleep at the wheel seems unfair when one considers the huge investments the industry is making in e-mobility and increasingly, in autonomous driving. A consortium led by BMW is aiming to develop fully driverless cars by 2021, and to become the industry leader.

Andreas Tschiesner, a senior partner in McKinsey's Munich office, thinks the German car industry is in a very good position in terms of innovation but he sees the growth of e-mobility in China and more "solutions-based" automotive technologies in the US tech sector, as major threats.

He also believes widespread 5G coverage will be "of the utmost importance" if the maximum benefit of current trends in automotive innovation in Germany are to be felt, as will the need to greatly improve the country's charging infrastructure for electric vehicles.

All hail the machine builders

"Made in Germany," whether it refers to air pumps, insulated wire or vacuum cleaners, is a point of pride for Germany's robust mechanical engineering industry.

When it comes to innovation in that sector, its equivalent of e-mobility and self-driving is "Industry 4.0," the so-called fourth industrial revolution. That refers to the approaching realities of automation, data exchange between machines, cloud computing, cyber-physical systems, IoT and a whole host of other trends.

Hartmut Rauen, deputy executive director of the VDMA, told DW that the German mechanical engineering sector is "at the center of technological development" in terms of Industry 4.0 and that business leaders in the sector have treated digitalization as a "mega-topic" from an early stage, hence why "Germany is the world leader in intelligent production."

The mechanical engineering sector is crucial to the German economy.

Although he sees the German industry's position on research and innovation as "outstanding" when compared with other world leaders in the sector such as the US, China and Japan, he is critical of government policy in the area.

"It cannot be that we are developing cutting-edge technology, but our data infrastructure is improving only in small steps," he said, emphasizing the VDMA demand that broadband expansion be taken to all areas of Germany by 2020.

Putting your money where your broadband is

If the industry boasts about its own technological readiness are to be believed, then Germany would appear to be just a nationally connected 5G network away from world domination.

Andreas Tschiesner is certainly in no doubt as to Germany's need for a digital infrastructure revolution. "Germany is not in a leading position in this area, in fact it has been declining," he told DW. "So it's very obvious, a coordinated effort to improve the infrastructure is required."

Despite the criticism, it does appear that the penny has dropped with both the German government and providers such as Deutsche Telekom regarding the critical importance of building the next generation of digital infrastructure. Finding consensus on Germany's digital needs is easy; building the infrastructure is the tricky bit.

The latest coalition deal has proposed a major expansion of the country's broadband and 5G capabilities, with up to €12 billion to be provided alone through the auctioning of 5G licenses.

That builds on previous commitments to invest heavily in internet provision, such as the €100 billion fund the government announced a year ago with a private consortium known as Netzallianz Digitales Deutschland aimed at ensuring gigabit-speed mobile and fixed-line broadband connectivity by 2025.

Deutsche Telekom, Europe's largest telecommunications provider, has become increasingly invested in the goal of rolling out high-speed internet, underlined by the recent hiring of Alex Choi, formerly a 5G specialist at SK Telecom in South Korea, home to the world's fastest internet speeds.

But finding consensus on all this is the easy part; building the infrastructure — and spending the requisite megabucks in budget-obsessed Germany — is the tricky bit.

The signs are better than the criticism of Germany's Luddite leanings suggest, especially if the key industrial sectors live up to their own claims of technological readiness.

Nonetheless, the many promises of wholesale digital investment, particularly in 5G, must finally come to fruition in the near future. Otherwise, a country with a penchant for driving fast risks being left in the slow lane.