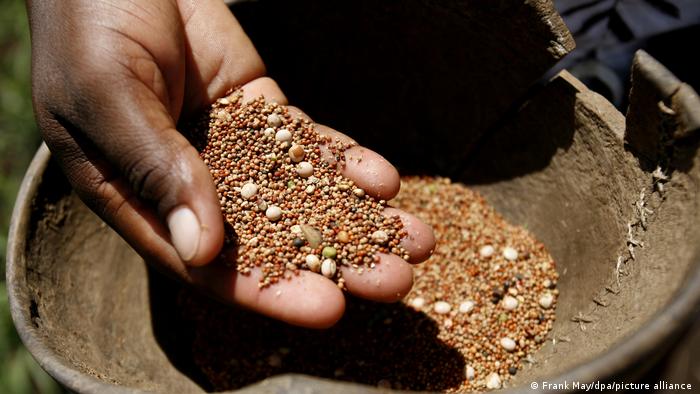 For thousands of years of human agriculture, the intrinsic nature of a seed — the capacity to reproduce itself — prevented it from being easily commodified. Grown and resown by farmers, seeds were freely exchanged and shared.

All that changed in the 1990s when laws were introduced to protect new bioengineered crops. Today, four corporations — Bayer, Corteva, ChemChina and Limagrain — control more than 50% of the world's seeds. These staggering monopolies dominate the global food supply.

"Seeds are ultimately what feed us and the animals we eat," Jack Kloppenburg, a rural sociologist and professor at the University of Wisconsin-Madison, said. "Control over seeds is, in many ways, control over the food supply. The question of who produces new plant varieties is absolutely critical for the future of all of us." 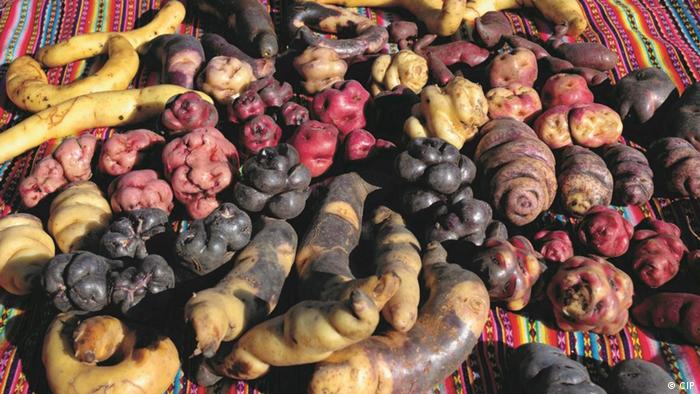 Some worry that heirloom crops, such as these potatoes from Peru, could disappear, meaning less genetic diversity

Not only are the channels through which seeds can be exchanged and distributed narrowing: Seeds themselves are becoming less diverse. According to the UN Food and Agriculture Organization, 75% of the world's crop varieties disappeared between 1900 and 2000.

A huge wealth of locally adapted crops is being replaced by standardized varieties. And experts warn that could have grave consequences for food security — especially as the planet heats up.

Major producers of genetically modified and bioengineered seeds, like Bayer and Corteva, strictly limit how farmers can use the varieties they sell. Usually, buyers must sign agreements that prohibit them from saving seeds from their crops to exchange or resow the following year.

Most countries only allow patents — exclusive ownership rights that were not originally created with living organisms in mind — on genetically modified seeds. But other plant varieties can also be strictly controlled by another type of intellectual property legislation called Plant Variety Protection. 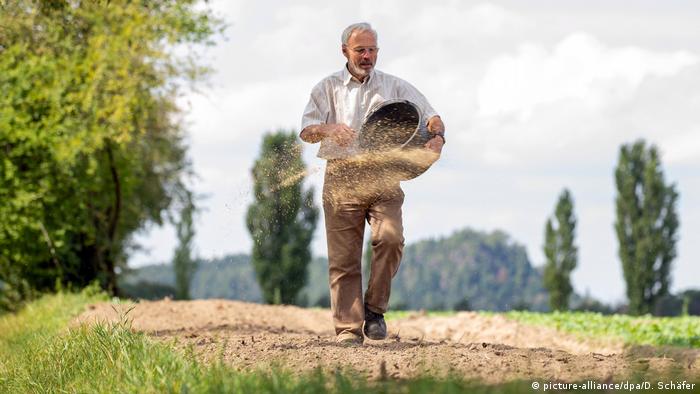 Seeds, grown and resown by farmers, were long freely exchanged and shared, but monopolies have upended that

The World Trade Organization requires member states — virtually all the world's nations — to have some form of legislation protecting plant varieties. More and more of them are fulfilling this requirement by signing up to the International Union for the Protection of New Varieties of Plants (UPOV), which places limits on the production, sale and exchange of seeds.

UPOV — and agribusinesses such as Bayer — say the restrictions they impose encourage innovation by allowing breeders a temporary monopoly to profit from the new plant varieties they develop without facing competition.

"It means, then, that they're able to control the way in which that variety is commercialized, and they can get a return on the investment they make — because it takes anything up to 10 or 15 years to develop a new variety," said Peter Button, vice secretary general of UPOV.

But to meet UPOV criteria, commercial seeds must be genetically distinct, uniform and stable. Most ordinary seeds are none of these things. 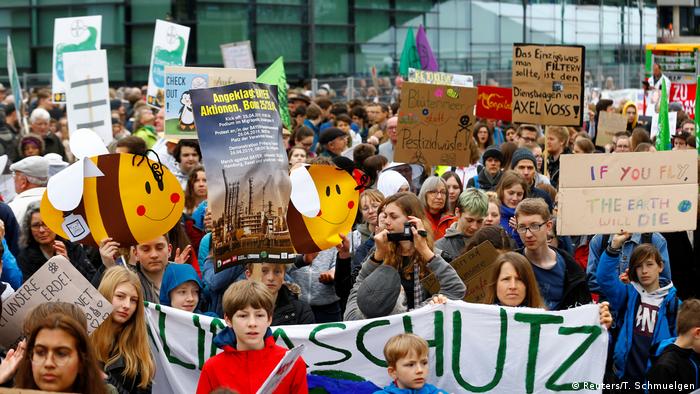 The varieties that ordinary farmers develop, and those handed down through generations, are genetically diverse and continually evolving. Unable to meet these criteria, farmers not only lack intellectual property rights to the plant varieties they breed themselves: In many countries their varieties can't be certified as seeds at all.

In addition to Plant Variety Protection, seed marketing laws in many countries forbid the sale — and often, even the sharing — of seeds that haven't been certified to meet standards such as a high commercial yield under industrial farming conditions.

Often, the only legal option is to buy seeds from corporate agribusinesses. And that means more and more of the world's food relies on less and less genetic diversity.

Karine Peschard, a researcher into biotechnology, food and seed sovereignty at the Graduate Institute of International and Development Studies, Geneva, says this is problematic in a warming world.

Changing climatic conditions mean farmers' carefully attuned agricultural systems are thrown out of whack. Particular crops need particular conditions, and as temperatures and rainfall shift, so, too, do the areas in which a plant can thrive. 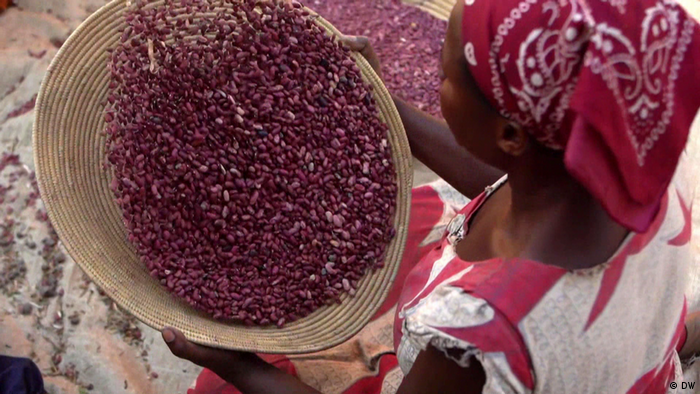 By planting a range of different crops, each with its own genetic diversity and potential for change, the plants themselves can adapt, and if one crop fails, farmers don't necessarily lose their whole harvest.

"The more uniform our genetic pool is, the more vulnerable we are to all sorts of environmental stresses, and we know that with climate change there will be more of these stresses," Peschard said.

There is no legal obligation to join the UPOV. But countries including the United States, Canada, Switzerland, Japan, as well as the member states of the European Union, are among the nations using bilateral and regional trade agreements to pressure countries in the Global South, such as Zimbabwe and India, to join. 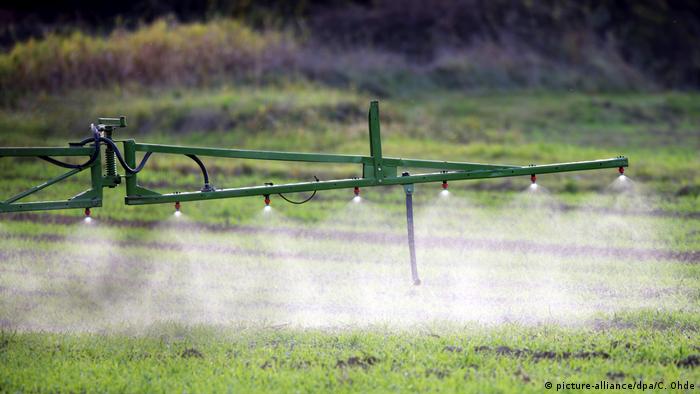 Critics say imposing uniform rules on a global scale ultimately means forcing the industrial farming that dominates Europe and the US onto parts of the world where food is still largely produced by smaller-scale, more sustainable farms.

"We're looking at this as neocolonialism destroying our livelihoods and our environment," said Mariam Mayet, director of the African Center for Biodiversity in South Africa.

Switching to standardized seeds changes whole agricultural systems. The big four agribusinesses also produce fertilizers and pesticides that farmers must buy to ensure their yield. Adopting these systems dictates the way fields are laid out, what other species can survive and the nutrient composition of the soil.

'Let the people feed themselves'

Mayet is calling for exceptions to seed legislation to allow farmers the autonomy to preserve the Indigenous agriculture that is "the bedrock to ensure ecological integrity, sustainability of nature, biodiversity, landscapes and ecosystems." She's not alone. 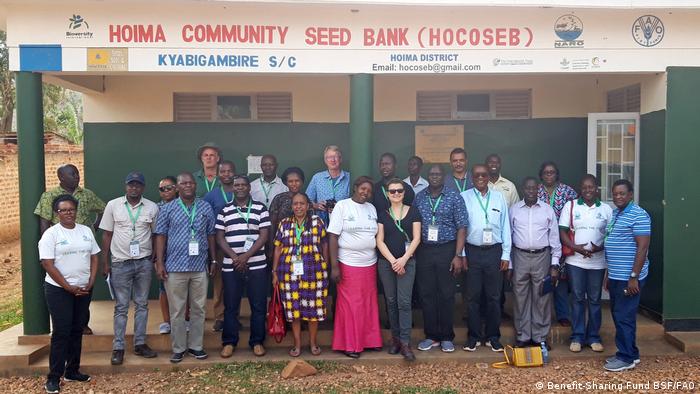 In more and more countries, attempts are being made to save and use old seed varieties, as here at the Hoima Community Seed Bank (CSB) in Uganda

Around the world, food sovereignty movements such as the transnational La Via Campesina, the Alliance for Sustainable and Holistic Agriculture in India, the Third World Network in Southeast Asia and Let's Liberate Diversity! in Europe, are advocating for seed networks that allow farmers and communities to bypass the corporate agribusiness giants and manage seeds on their own terms.

For the last six years, rural sociologist Jack Kloppenburg has been packaging seeds and sending them to farmers through the Open Source Seed Initiative (OSSI).

Drawing inspiration from open-source software — computer code available for anyone to use, distribute, and modify, as long as users allow others the same freedoms — open-source seed varieties are freely available and widely exchanged.

Instead of a license, their use is subject to a pledge. 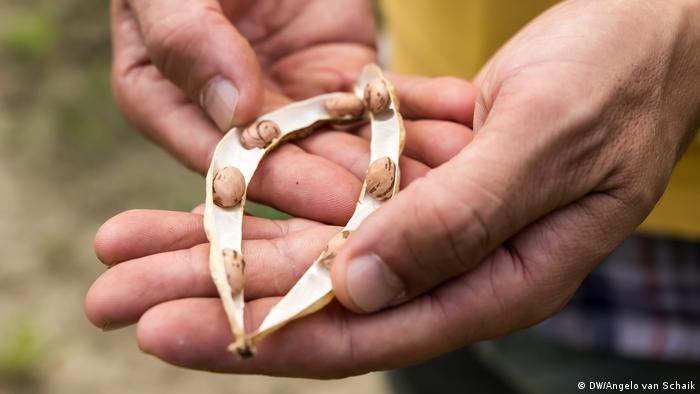 Sharing for the benefit of the community: That is the idea behind the Open Source Seed Initiative

Kloppenburg admits that the OSSI model isn't perfect: Because the seeds it distributes are not legally protected, they're vulnerable to appropriation by commercial interests. But he believes that as a way of sharing for the common good, it's a concept that could be adapted to local needs.

Industrialized agriculture — which maximizes yield at the expense of biodiversity and ecology — is often justified by the argument that we have to feed the world. For Kloppenburg, this is the wrong way to look at things. "People need to feed themselves — they need to be allowed to feed themselves," he says.

A UN report on the state of world biodiversity for food and agriculture links rising food insecurity and chronic hunger to threatened habitats and ecosystems. But traditional female stewards of biodiversity offer hope.

Informations on seed laws at The Journal of Peasant Studies