Aging populations challenge China, India, Iran and Japan | Asia | An in-depth look at news from across the continent | DW | 29.08.2018

As its society overall ages, China plans to scrap its one-child policy. Other Asian nations also face the challenge of demographic change. 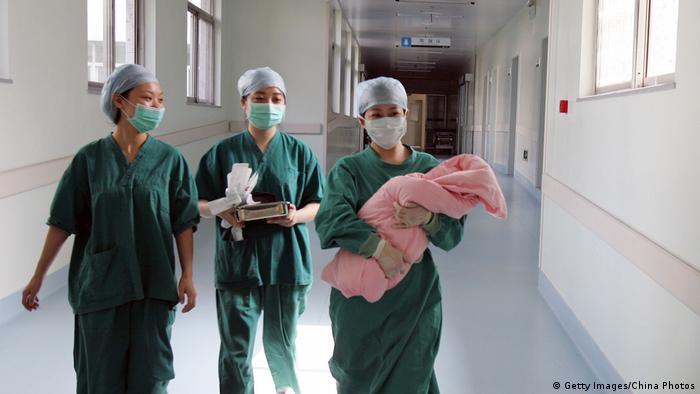 In many Asian countries, concerns about dwindling populations overshadow fears of global overpopulation. Societies overall are aging at a pace that birth rates cannot keep up with — a fact that will pose a major challenge to many a social security system in the future.

With the exception of India, women in many industrialized and emerging countries have fewer than 2.1 children on average, which is the rate deemed necessary to maintain a population. Governments have tried to influence demographic development in many ways.

China introduced its one-child policy after the Mao era because unlimited population growth was not compatible with Chairman Deng Xiaoping's plans to increase prosperity.

Planners eventually realized that China, still the world's most populous country, was headed toward massive social problems should the birth rate remain low. As a result, in 2015 China officially relaxed the one-child policy — in reality, several exceptions had effectively made it a 1.5-child-policy — and began allowing families to have two children. Now it seems that the government plans to abandon limits on how many children families can have altogether, according to draft legislation scheduled to be adopted in 2020.

To encourage women to have more children, however, the government needs to make it easier for them to balance work and family life. Wary of the new child-friendly policy, many companies have tried to avoid employing women of childbearing age to save costs. On the other hand, it seems that many families are content to have just one child because of the immense cost of raising a child — in particular if they are looking at a first-class education — and in view of the obligations that couples have toward their own parents. 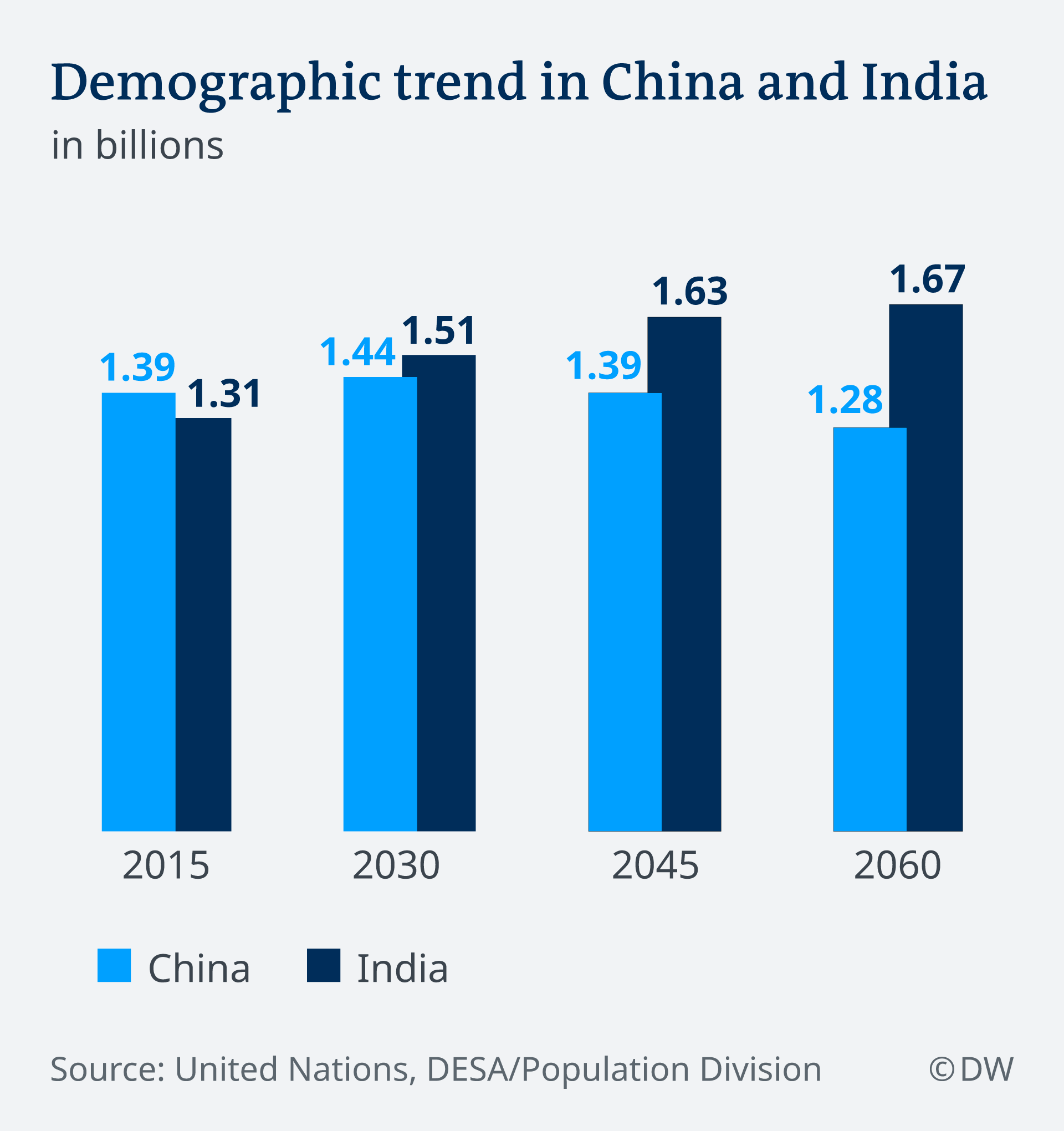 India is soon set to become the world's most populous country, based on current trends

A year after the one-child policy was relaxed, there was a rise in births, though weaker than expected, with 1.3 million children born instead of the 3 million hoped for by China's family planners.

Two social scientists from Nanjing University recently came up with a proposal to boost birth rates. Childless employees under the age of 40 could pay a percentage of their wages into a fund for newborn babies. If they were to have two children, they would be entitled to parental benefits; should they have just one child, they would be entitled to a refund of their contributions only after reaching the legal retirement age.

"Complete nonsense," was the commentary on CCTV. The state broadcaster argued that improving options for young families to encourage them to have more kids is the way to go — and not adding financial burdens.

"What if the state took over a percentage of the costs of an education, health care and the cost of living from a child's birth until it reaches legal age?" the educator Xiong Bingqi suggested in the Beijing News. "Having a child costs nothing at first, but then it gets expensive," he said, arguing that the plan could be tested in underdeveloped regions.

Iran, where birth rates decreased rapidly in the mid-20th century even without mandated limits, has also tested various family planning policies. During the rule of Shah Mohammad Reza Pahlavi, the country ran a US-backed family planning program, which however, ultimately did not have much of an effect on people's reproductive behavior: At the time of the Iranian Revolution in 1979, women had an average of six children, and even a record 6.5 kids per woman in the 1980s, a patriotic reaction to appeals by the country's religious leader, Ayatollah Ruhollah Khomeini, during the war with Iraq to breed a 20 million-strong army.

Faced with an exhausted economy and the challenge of an increasingly young population after the war, Iran changed tack under the reformist presidents Akbar Hashemi Rafsanjani and Mohammad Khatami. Two children became the norm thanks to a massive state family planning program. In 2005, the conservative hard-liner Mahmoud Ahmadinejad took over the presidency, and having a large number of children once again was declared a blessing while family planning was brushed off as the West's strategy to weaken Iran. Khomeini's successor, Ayatollah Ali Khamenei, called previous governments' policies a mistake that needed to be corrected. 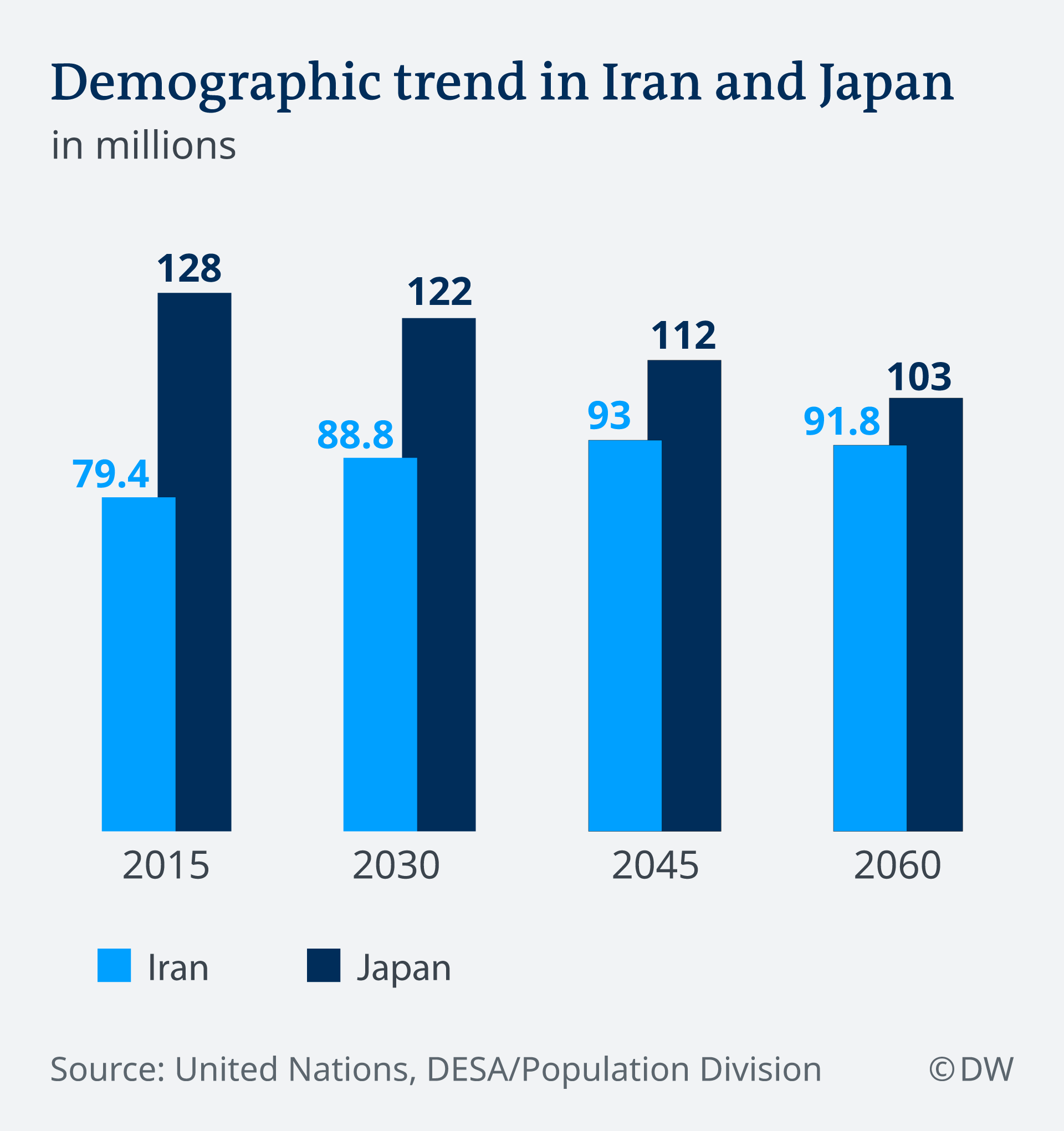 Japan's population peaked around 2010 but is set to dip rapidly; Iran's is still on the up

No more free birth control, a ban on sterilizations, financial incentives for larger families, fewer sex education programs for teenagers, limited college admissions for women who sought certain professions — by 2014, Iran had tried several different ways to coerce a baby boom. To no avail, however: Iranian women have an average of two children.

Iran is in a favorable demographic phase: moderate population growth paired with a large productive population. However, with the country again plagued by US sanctions, much would need to improve economically for Iran to benefit from this "demographic dividend."

India, too, has a huge number of young people. However, with economic growth declining, automation on the rise and fewer jobs in the agriculture sector, India hasn't managed to create enough adequate jobs.

Unlike China, Iran and Japan, India boasts a growing population, and there have been no sudden fluctuations — even if the overall trend has been a gradual decrease since 1965. Still, India's birth rate is not expected to fall below the 2.1 mark until after 2040.

Japan already has a relatively elderly population. One in four people are older than 65, and their proportion is rising. Japan's current population of 128 million is expected to plummet to 112 million by 2045. In 2005, Japan created a cabinet post responsible for raising the birth rate. A few years ago, experts came up with ideas to help remove obstacles that keep people from getting married and create financial incentives — none of which boosted the birth rate.

Unlike India and Iran, however, Japan has more job openings than seekers. Many companies try to lure workers by offering perks — from recreation and flexible hours to marriage counseling and time off for procreation. None of these initiatives is likely to make a significant change, however, and a few companies are already preparing for completely automated assembly lines to run 24/7. Japan even has plans for robots and artificial intelligence to take over nursing care tasks in the future.

As a rule of thumb, the larger a country's younger population, the more likely its total population is to grow