Fast-tracked legalization of same-sex marriage could become a side-effect of rather haphazard German electioneering. First Chancellor Merkel hints she's ready to cave, then her rival says "let's vote on it right now." 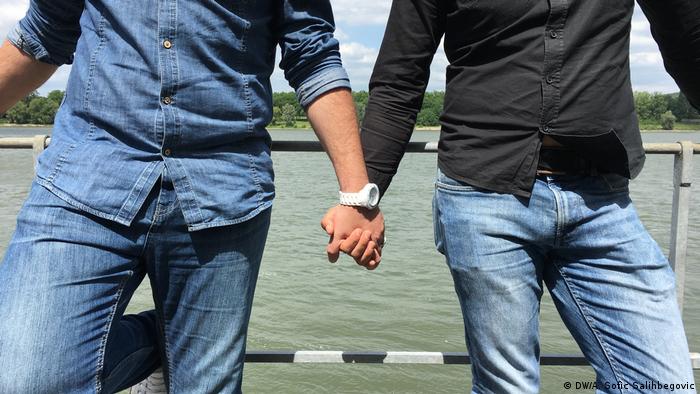 Social Democrat candidate for chancellor Martin Schulz on Tuesday sought to call Angela Merkel's election bluff on gay marriage. After Merkel for the first time intimated that her party might not seek to block a change in the law, Schulz pounced, saying his party would like to rush it through the Bundestag before September's election.

He accused Merkel's conservative bloc of having blocked the introduction of laws guaranteeing marriage equality for homosexual couples throughout the past four years of the coalition government, saying that if the conservatives did not agree to a vote, the SPD parliamentary party would take its own steps to arrange for one to take place.

The call for a speedy vote on the issue comes after Merkel indicated in an interview on Monday evening that she was ready to make same-sex marriage a "decision of conscience," meaning that no one would be forced to toe a party line. All of Merkel's potential coalition allies favor same-sex marriage, some say it's a precondition for a coalition.

Schulz said in Berlin that he had asked the SPD parliamentary party leader, Thomas Oppermann, to take up the issue with the SPD's coalition partner, Merkel's Christian Democrats.

Merkel, the daughter of a Protestant pastor, had previously expressed personal reticence on the issue, and many of her conservative colleagues remain opposed, although polls suggest that the majority of Germany's population would support enshrining gay marriage in law.

Outside of the CDU and its Bavarian sister party, the Christian Social Union (CSU), gay marriage has wide political support, with the Green Party and the Left party both also calling for a vote on the issue this week.

Both the Free Democrats and the Greens - the parties Merkel is likely to need if she seeks a coalition without Schulz's SPD - say that a vote on marriage equality would be a precondition for them in coalition talks.

However, the conservative caucus leader Michael Grosse-Brömer has continued to warn against a vote on marriage equality before the summer break, saying that homosexual marriage raised a number of constitutional questions. He said he saw "no need for a hasty decision in the Bundestag," and that the conservatives had always been in agreement with the SPD "that we will not take any decision in this legislature."
Read more: CSU plans family-centered campaign, as Germans warm to gay marriage

While also calling for a vote this week, the leader of the Left party, Bernd Riexinger, on Tuesday accused Merkel of political maneuvering in the comments she made on Monday.

"It is surprising how liberal-minded the chancellor becomes when an election campaign is underway," he told the AFP news agency. "It's not exactly what I'd call honesty."

If there is to be a vote on the issue before the summer break, it must occur by Friday, the last day parliament sits.

Same-sex marriage is already legal in 14 EU states, including France, Spain, Portugal, the UK and the Benelux countries.

The German chancellor has halfheartedly abandoned her opposition to same-sex marriage. The move was solely a political calculation, says DW's Gero Schliess. Nevertheless, it is good news for Germany. (27.06.2017)

Amidst more bad news in opinion polls, Social Democratic chancellor candidate Martin Schulz went on the attack at the party conference in Dortmund. But does he have the policies and charisma to make up a huge deficit? (25.06.2017)