Merkel′s conservatives under pressure to allow gay marriage | Germany | News and in-depth reporting from Berlin and beyond | DW | 06.03.2017

Social Democrats want to put marriage equality on the table, and more than 80 percent of Germans support expanding the right to marry to same-sex couples. But many Christian Democrats are still pushing back. 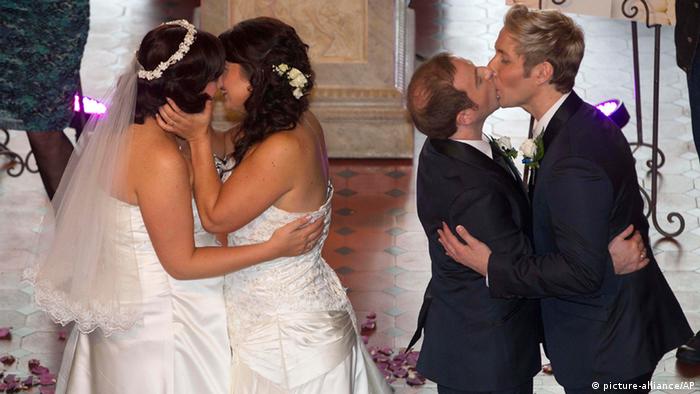 Australia's Senate has rejected a proposal to hold a non-binding referendum on gay marriage, arguing it would be expensive and spark divisive debate. Gay marriage advocates vow to push for parliament to take action. (08.11.2016)

Six months after an overwhelming majority voted to legalize same-sex marriage in Ireland, those unions can now begin taking place. Irish politicians hailed the "profound" day for their country. (16.11.2015)

Same-sex couples cannot get married in Germany - in contrast to the situation in the US and some other EU countries. Chancellor Angela Merkel's governing Christian Democrats remain opposed. (24.07.2015)

Marriage equality is legal in 22 countries, including Argentina, South Africa and the United States. Germany is not one of them. But now members of the junior governing Social Democratic Party (SPD) are pushing to change that. They are calling on their coalition partners, the conservative Christian Democrats (CDU) and Christian Social Union (CSU), to go along with a change of law that would grant same-sex couples the right to get married and not just obtain civil unions.

Thomas Oppermann, the head of the SPD in parliament, said he planned to put marriage equality on the agenda for the next coalition meeting of the SPD, CDU and CSU.

"Everyone's talking about preserving our values these days. That shouldn't just be a talking point in grant speeches, but rather a part of actual policies," Oppermann told the newsmagazine Der Spiegel. "Among these values are not only the protection of marriage and family, but also equal rights for different kinds of relationships."

In Germany, same-sex couples can enter into civil unions, or "registered life partnerships" per the verbatim translation. The law for this was passed in 2001 and grants some, but not all, of the rights that partners enjoy in sanctioned marriages. Civil unions enjoy the same tax benefits that heterosexual marriages receive and allow partners to adopt each others' children. But civil unions do not allow couples to adopt children together as heterosexuals can. 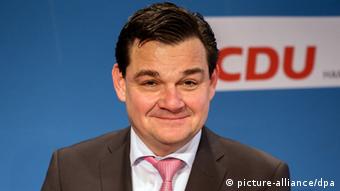 "What should matter here is the well-being of the child and not the sexual orientation of the couple looking to adopt," Weinberg stated in an email to DW.

Weinberg also wrote that the CDU-CSU parliamentary group did not appreciate the timing of the SPD's sudden push for marriage equality.

After all, Weinberg wrote, making progress on the issue was not part of the coalition agreement that the parties had signed before forming their government together in 2013. Weinberg believes that the call for action is part of the SPD's campaign for Bundestag elections in September.

Supporting marriage equality may indeed prove a smart move from an election standpoint, considering that 83 percent of Germans believe that it should be legalized. That's the result of a representative poll conducted by the Federal Anti-Discrimination Agency in January 2017.

"A large majority of German society is ready for gay marriage," Markus Gutfleisch, the spokesman for the LGBTQ ecumenical group HUK, told DW. "It's just a small minority that's defiantly holding on to old legal constructs."

Gutfleisch said he was disappointed that Germany, which is considered a role model on many other social justice issues, is lagging behind several nations when it comes to same-sex marriage.

Finland is the most recent country to legalize marriage equality. Other European nations that allow homosexual couples to get married include Belgium, Denmark, Estonia, France, Iceland, Luxembourg, the Netherlands, Norway, Portugal, Slovenia, Spain and Sweden. Even deeply Catholic Ireland joined the ranks after a nationwide referendum returned a landslide victory in favor of same-sex marriage in 2015.

Even some center-right leaders ultimately agree with equality activists. Jens Spahn is a member of the CDU's executive committee and openly supports marriage equality. On Wednesday he tweeted that he wanted to support marriage and families and to "open marriage to everyone."

Stefan Kaufmann, also a gay CDU deputy, said in a 2016 Bundestag speech that he wanted his party to be more open. He also explained, however, that marriage equality was difficult for some representatives of the CDU.

"Redefining what marriage means is harder for a party like ours, which carries the 'C' in its name, than it is for strictly atheist parties," Kaufmann said, referring to the word "Christian."

To Gutfleisch, Christianity and marriage equality aren't at odds with each other. He believes that the issue shouldn't be painted as a zero-sum game in which extending rights to all people somehow put other people at a disadvantage.

"A marriage stands for authentic values - no matter the sexual orientation," Gutfleisch said. "Legalizing gay marriage will take nothing away from couples living in heterosexual marriages."